Over 150 guests attended the launch of Adlib’s new warehouse and office facility in Glasgow which took place last week.

Located on an industrial estate a stone’s throw from Glasgow International Airport, the event offered locally based individuals, companies and organisations from all industry sectors the chance to meet some of the brands, manufacturers and people with which Adlib regularly  collaborates.

On the audio side these include L-Acoustics, CODA, DiGiCo, Soundcraft, Midas, Sennheiser, Shure and DPA, with lighting and visuals represented by Martin Professional by Harman, Chauvet, Robe, Avolites, Clay Paky, MA Lighting and Panasonic. Canford Audio and Audio Technica were also present.

Adlib’s Scottish operation is focused on providing alternative premium products that are not currently available in the local market.

Resembling an informal trade show, each brand was allocated a compact space in one of two areas dedicated to audio and visuals where they set up their key products. The lively interaction of all in close proximity helped create a highly convivial atmosphere.

A diversity of guests attended encompassing sound, lighting and AV rental companies, venues – from live and classical music to houses of worship, installation specialists, engineers and assorted designers and creatives.

Adlib highlighted some of its plans for the future which include hosting extensive training and product awareness initiatives via the Glasgow hub as well as developing sales and cross rental opportunities and the supply of audio, video and lighting as complete technical solutions packages.

Adlib’s association with Scotland goes back over 25 years and MD Andy Dockerty commented, “Having worked closely with many Glasgow artistes such as Texas, Del Amitri and GUN since the early 90s I have personally had a great bond with the Scottish music scene and see Glasgow as being almost identical to Liverpool. I have so many friends in Glasgow that I feel absolutely at home here and in many respects question why it took us so long to open a facility up here. To witness the turn out from across Scotland for our opening day has actually been quite humbling. We are proud of our initial team of people here and the warehouse, offices and training facilities mean we can emulate everything that we do and provide down south. We genuinely hope we can enhance our older relationships and develop some new ones.”

Andy joined the Adlib Scotland team of Graham Cochrane, Steph Fleming, Barclay Dakers and Craig Hamilton. They, plus Dave Kay, John Hughes and others from Adlib in Liverpool welcomed a steady flow of guests throughout the afternoon.

Adlib is working with some of the leading sound, lighting and video technologies on the market, and the training infrastructure that has worked so successfully in Liverpool has been physically replicated in Glasgow, with a classroom space and a series of flexible demo areas that can be divided up and sized according to the exact requirements of the session in progress. 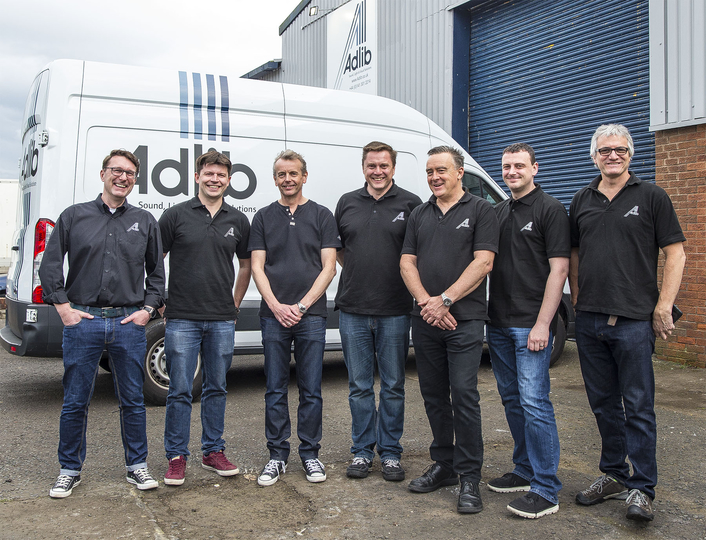 Adlib has also lost no time in organising the initial training programming, with a DiGiCo event taking place the following week highlighting their SD series of consoles on the first day followed by the S21 and S31 on the second day.

This is followed by a three day L-Acoustics product training experience scheduled for the end of October, covering system fundamentals on the first day, KARA on the second day and K2 on the third day … with Soundcraft Vi console training days confirmed for November.

Over £1million has been invested in the Scottish operation since its launch at the start of 2015. The new warehouse completes the current phase of development which also includes a substantial amount of new equipment available to the Scottish market.