Adlib gets Riotous in Tour with Kaiser Chiefs

.
Adlib has been providing a riotous sound for favourite UK rockers, Kaiser Chiefs, renewing a long term working relationship with the band and reuniting many crew who have worked together over several years, on a tour that’s been every bit as full-on and enjoyable as previous ones.

Adlib’s George Puttock, Sam Proctor and James Petch joined the band’s fabulous engineering duo of Chris Leckie at FOH and Ilias Andriantos on monitors for a rousing three week tour where all the energy and passion of the Kaisers’ renowned live performances was exceptionally well received by the public.

The sound system chosen was L-Acoustics. The venues ranged from London’s 16,000 capacity O2 Arena to many well-known & loved theatres and town halls, culminating in a homecoming gig at Leeds Arena … so the PA System needed to be very adaptable.

The largest configuration at the O2 featured 14 x L-Acoustics K1 speakers a side complete with four KARA-downs for the main hangs, with 12 x V-DOSC and six dV-DOSC downs for the two side hangs and three flown delay stacks of eight K2s.

They had nine subs a-side ground stacked in a left-centre-right format together with four ARCs a-side positioned on top of the subs for infill. All these elements were driven by L-Acoustics LA8 amps.

The system proved itself to deliver just the right amount of sonic energy required for any large Kaiser Chiefs show.

One of Adlib’s highly respected system techs, George Puttock administered  control via one of Adlib’s Lake processing racks running via fibre, with three LM44s at FOH connected via fibre link to three LM 26s on stage left, and then via Cat 5 to three additional LM26s on stage right. Both sides of the stage then split out via AES to the amplifiers.

Onstage, James Petch looked after monitor world for Ilias who has worked with the band for around 10 years.

Adlib supplied 12 of its MP4 low profile wedges and L-Acoustics ARCs combined with SB28s for ground stacked sidefills, plus an Adlib MP4 dual 15 inch drum sub. These were all driven by Labgruppen PLM 10Ks.

With four of the band on IEMs, the primary purpose of all these speakers onstage was to provide some air movement and low end punch ... as well as for backup, and the fact that Ricky likes to climb on and launch himself off them throughout the performance!

Ilias’s console was a Soundcraft Vi6, he’d used a Vi1 for the European leg of the tour at the end of 2014, so it was very straightforward to transfer his show to the larger console for the UK section.

The band have their own Sennheiser mics package.

For this tour, as Adlib has witnessed with a select group of top end engineers, Chris Leckie returned to his roots and specified a Midas H3000 console which raised a few eyebrows!

Like most other sound engineers on the planet, Chris has used digital desks on his various clients including the Kaiser Chiefs, and explained his decision to go Old Skool on this one. 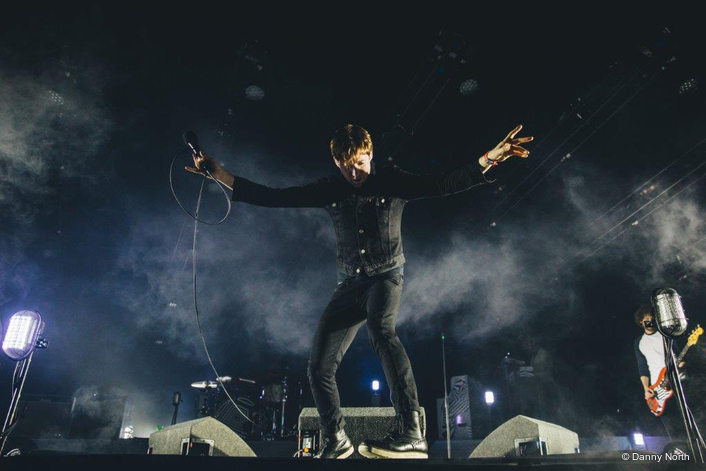 “The majority of the newer digital consoles do a pretty good job of impersonating an analogue desk ... but even after 10 years of navigating my way through the various menu and operating systems ... there is still absolutely no substitute for having everything available and visible – right there – all at once!” he declares.

Chris picked the desk because he knows what every button does and where to find it … as well as because he knows he can get a sound out of it, and one that is ideally suited to the band’s style and delivery.

The same criteria drove his choice of outboards.

The dbx compressors work well and only have three controls -“Result”! The Drawmer Gates are like “Familiar old friends”; the Yamaha SPX 990s create a reverb sound effect that he can actually hear working “Unlike some of the posher ones that provide more of a ‘room simulation’ ”.

Very best of all … is the fact that the Empirical Labs distressor - he joked - has a Nuke button!

Along with his trusty Alesis Midiverb Mk 1s (yes, the oldest ones) he also loves his trio of BSS 901 frequency-conscious compressors which “Do a fine job of taming” singer Ricky Wilson’s shoutier moments across each of his three mics.

He adds that Kaiser Chiefs are one of the few bands who don’t have a selection of backing track channels playing off hard drives lurking in the shadows, “Generally if you can hear something going on, you can see the guy who’s playing it!

”That’s why he likes to be hands on!

Consequently, one of the challenges is to stay on top of everything happening onstage played by real humans and the inevitable accompanying chaos factors which include occasionally “Very antisocial” levels of backline volume which can threaten to sabotage his final mix!

Chris has worked with Adlib on many occasions using “The newest and very best technology”, but in this particular case, he really enjoyed engaging with some quality audio equipment.

He adds, “My crew have been as enthusiastic and keen as I have come to expect from Adlib, and all of us were genuinely thrilled to bring the H3000 out on tour in spite of the extra workload its analogue-ness brought to the party”.

Account handler Phil Stoker stated, “Chris and Ilias are like members of the Adlib family so we are more than happy to ensure we accommodate everything they need to be happy on the road, including one of our beloved Midas boards! The band are still exceptional live, and Adlib has been with the Kaiser Chiefs from the small gigs up to Leeds, Elland Road Stadium and now the O2, so this is a great way to start 2015!”

Soundcraft Vi Series Cons... World With Kaiser Chiefs
Kaiser Chiefs Have A Riot with Robe!
Sex and Love for Adlib with Enrique