Gavin won Modern Drummer Magazine’s readers' poll for "best progressive drummer of the year" for four consecutive years. In 2011, he was voted best progressive drummer by the US DRUM! Magazine and won the 2012 prog drummer award in Classic Rock Magazine. In 2008, he joined King Crimson as part of a dual-drummer lineup with Pat Mastelotto. Last year Gavin was a featured performer on 'The Late Show with David Letterman' as part of their "Drum Solo Week," along with such players as Neil Peart, Stewart Copeland, and Sheila E. 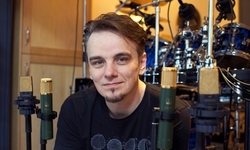 "I used C414's on the last Porcupine Tree studio album at AIR studios when the engineer suggested using them on the toms,” stated Harrison. “I had never tried that before, but was blown away by the clarity and punch the C414's captured. They sound very even across my five toms.”

At his home studio, Gavin uses a pair of C414 XLIIs to capture room ambience, making full use of their nine selectable pickup patterns. Capturing overheads are a pair of factory matched C12VR tube microphones, which Gavin describes as "creamy heaven.”

"By changing the pickup pattern I can effectively change the size and response of the space,” continued Harrison.  “I A/B'd precisely against my previous mics and found the AKG's go way beyond what I had before.”

For the bass drum, Gavin is using the D12 VR – AKG's new generation premium bass microphone that features an all-new ultra thin diaphragm and the original C414 transformer from the 1970s.  With a response somewhere between a vintage and modern upfront sound Gavin says, "it really adds a nice solid punch to my bass drum.”

Gavin concludes, "As a session drummer over the past 30 years I've used AKG mics so many times I've lost count. Since constructing my home studio 15 years ago, I've been paying more attention to the kind of mics that make my drums sound great and AKG provides me with that quality sound.”

AKG is distributed in the United Kingdom and Republic of Ireland by Sound Technology Ltd.

HARMAN designs, manufactures and markets a wide range of audio and infotainment solutions for the automotive, consumer and professional markets — supported by 15 leading brands, including AKG®, Harman Kardon®, Infinity®, JBL®, Lexicon® and Mark Levinson®. The Company is admired by audiophiles across multiple generations and supports leading professional entertainers and the venues where they perform. More than 25 million automobiles on the road today are equipped with HARMAN audio and infotainment systems. HARMAN has a workforce of about 13,900 people across the Americas, Europe and Asia, and reported net sales of $4.4 billion for year ended June 30, 2012.