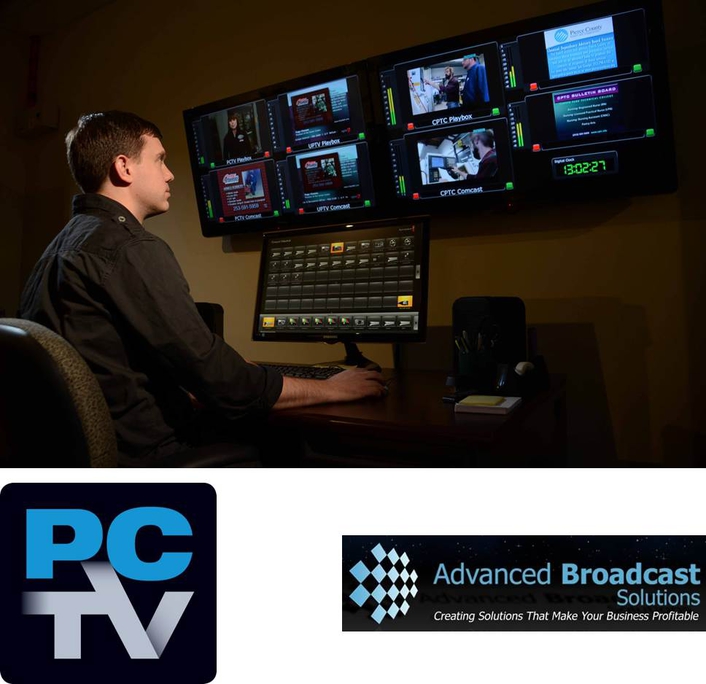 Overseen by the Rainier Communications Commission (RCC), a cooperative of Pierce County and cities and towns within the county, PCTV creates and manages government access programming for the area. It maintains a busy production schedule, including Pierce County News, a weekly news program produced in its studio, and Rainier Country, an Emmy-nominated newsmagazine. PCTV also provides coverage of government meetings for Pierce County and six local cities. Programming is available via cable television and at www.piercecountytv.org.

Another important requirement of the new master control was that it could eventually transition to full HD-SDI. “We saw on the horizon the opportunity to move to HD,” noted Ben Ramsey, PCTV cable operations specialist. Currently, studio and field footage is shot in 1080i using Panasonic AG-HPX300 P2 HD cameras, then downconverted for cablecast. However, PCTV recently received confirmation from Comcast that PCTV will be distributed in HD starting next year.

ABS arranged for meetings with equipment manufacturers at the 2011 NAB Show last spring so PCTV personnel could research their options. PCTV then designed the system and put it out to open bid. After winning the bid, ABS worked with PCTV to refine the system and made suggestions for improved operation. Installation of the new master control began in October 2011. After several weeks of testing, the three stations were switched to the new system in February 2012.

The upgraded space is “a lot more productive,” according to Ramsey. It includes a separate control station; previously, all work was performed at the equipment racks. A Harris Predator multi-display controller feeds two 42-inch Panasonic LCDs at the control station. PCTV also plans to install walls around the new equipment racks to reduce fan noise.

PCTV has maintained a long relationship with ABS, and Ramsey said the entire upgrade process went very well. “As a government entity, all equipment projects go out on open bid, but ABS is very helpful when we’re looking for new equipment, whether they win the bid or not,” he said. “They are experts in this field and we enjoy working with them.”