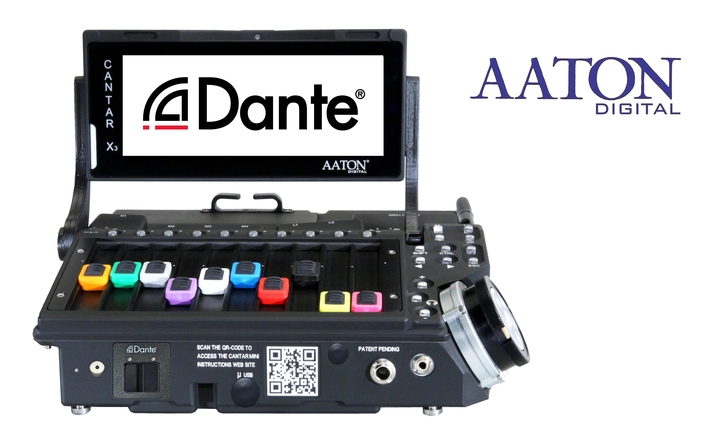 Aaton-Digital announced today that its CantarMini digital sound recorder is now deliverable equipped with an Audinate 16x16 Dante board.

Company president Jacques Delacoux said: “We are pleased to announce that the Dante board as well as a Dante+ option is now available on request for all new CantarMini recorders.

The Dante card adds 16 bidirectional channels to the CantarMini that becomes the best portable mixer recorder for compact carts or body-rig use with multiple wireless receivers.
We are taking orders NOW!"

"Also, from September 2022, we will offer the possibility to upgrade existing CantarMinis with 16 additional channels of Dante I/O for the price of €1450, ex-Works, ex-VAT, shipping costs not included.
The upgrade must be carried out in our workshop in Grenoble, France."

All Dante equipped CantarMinis are eligible for the optional software license DANTE+, €299, ex-Works, ex-VAT”
Dante+
A pack of advanced options based around DANTE to include: Digital limiter, digital gain and equalizer on DANTE inputs.
Available for all new CantarMini recorders equipped with the Dante hardware.

The regular CantarMini recorder, PN 2400005 continues to be available.

The award-winning Aaton-Digital Cantar mutitrack digital sound recorders CantarX-3 and CantarMini have been hugely successful globally and many of the world’s Production Sound Mixers are now using these recorders on a daily basis recording top movie sound tracks and music.

Academy Award® winning US Production Sound Mixer Phillip Bladh used his CantarX-3 to record both dialogue and music for the movie ‘Sound of Metal’, winning him an OSCAR® for Best Sound in 2021, also winning the Amps, BAFTA®, and CAS awards for that movie too.

UK Production Sound Mixer Stuart Wilson (CAS) won a BAFTA for Best Sound and an OSCAR for Best Sound Mixing in 2020 for his contribution to the multiple award winning movie ‘1917’ recording sound on set and in the field using his CantarX-3 under demanding and difficult conditions.

In 2019, UK Production Sound Mixer John Casali (AMPS) was awarded an OSCAR for Sound Mixing for the movie ‘Bohemian Rhapsody’. He was also included in a BAFTA award for Best Sound, included in the UK AMPS award for Excellence in Sound for a Feature Film, and included in the C.A.S. Award in the USA for Outstanding Achievement in Sound Mixing for Motion Pictures.
All of his recording for ‘Bohemian Rhapsody’ was accomplished with his two Aaton Digital CantarX3 field recorders.

About Aaton-Digital
Aaton-Digital has a long standing reputation for excellence in manufacturing and design. The original Cantar sound recorders X-1 and  X-2 have been described as having legendary sound quality, and that is carried forward in the current CantarX-3 and CantarMini recorders.
The company is also highly regarded for listening to and reacting quickly to feedback from its users.