5 Seconds of Summer, One Mixing Console of Choice: Soundcraft Vi4 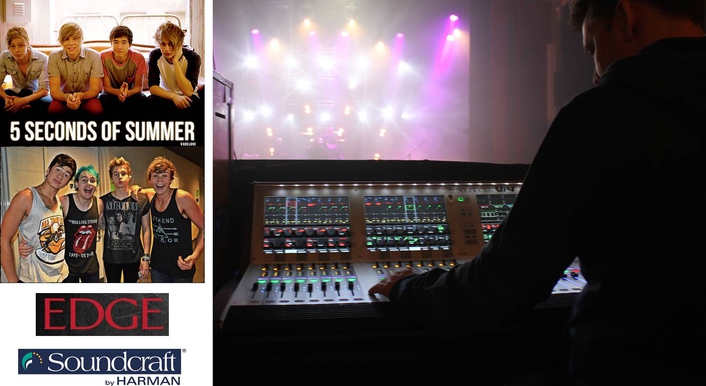 .
Australian pop rock band 5 Seconds of Summer is currently one of the hottest bands in the world. Since forming in December 2011 as college students posting YouTube videos of cover songs, the group has rocketed to worldwide fame—it has performed as the opening act for One Direction and will reprise that role on an upcoming tour, had its debut single “She Looks So Perfect” hit Number One in 39 countries and sold out headlining shows in Australia, the US and the UK in minutes. Over the last year the band and front of house engineer John Delf have toured the world with one console: the HARMAN Soundcraft Vi4.

“We’ve done more than 110 shows with One Direction, interspersed with 5 Seconds of Summer’s headlining shows and last year played in front of a combined audience of over one million people. Not bad for a band that at the time hadn’t even had a single out yet,” said Delf. “Most of the venues have been arenas from 10,000 to 20,000 capacity although we did a couple of shows that were 25,000 to 30,000, and a few 1,000 to 3,000-seat theaters. Through it all the Vi4 has been rock solid.”

Although 5 Seconds to Summer has been playing some of the world’s biggest venues and the Vi4 is capable of 96 inputs to mix, the band has a channel count of 32, making the Soundcraft Vi4’s compact size and ready access to all functions a big benefit. “I can get all my important channels on layer one, so I find it really easy to get access to everything I need without having to switch pages on the console,” Delf said.

What’s Delf’s biggest challenge in using the Vi4? “Trying to hear the mix over the screaming girls! For the first three songs of the set it’s almost impossible to hear the music because the fans are so excited to see the band that their screams are in the region of 115 to 120 dB, which is quite a lot louder than the usual 104-105 dB gig level. This also batters your ears and they take a little time to recover so it’s not until around song four that can you start to really get an idea as to what is going on.”

“I have all my main important channels on layer one of the desk, so all the drums, bass, guitars and vocals, then layer two is just for backing tracks and effects returns that usually look after themselves,” Delf said of his console configuration. “I use the VCAs a lot and have masters for all sections of the band and an all master for the whole band less vocals. It’s with this all VCA that I ride the dynamics of the band. I also have an effects VCA and a delay return VCA so I can control these levels and mutes without going on to layer two.”

Delf noted that one of the main reasons he chose the Vi4 for mixing 5 Seconds of Summer is the new Soundcraft Realtime Rack library of plug-ins developed with Universal Audio and compatible with all Soundcraft Vi Series digital consoles. “The fact that you can now use all the Universal Audio plug-ins in the live environment is so exciting,” he said. “I own Edge Recording Studios in Cheshire UK and we have a UAD2 card installed and the Universal Audio plug-ins sound amazing in the studio, so to be able to apply those to live sound is very cool.”

“Soundcraft also provided us with the touchscreen to control all these plug-ins and that makes it so much cooler to use and also looks pretty damn impressive,” Delf continued. “When I first started using them the effect was quite subtle but one day on tour one of my cables went missing and I thought I couldn't use it for the show and that’s when I realized how much I missed it and how big a difference it really made. We found the cable in the end and it was all systems go. Not sure what I'd do without it now to be honest!”

Having used a Soundcraft Vi6 on a previous tour with the band Plan B, Delf chose the Vi4 primarily for its sound quality. “I just love the way it sounds and it was my first choice for 5 Seconds of Summer,” he said. “This band has a much smaller channel count than the Plan B tour so I was able to fit perfectly on the Vi4, so why not? It sounds amazing, has great pre's, has built-in dbx compressors and Lexicon effects, plus the addition of the Realtime Rack UAD card. Why wouldn't anyone choose one?”

So far, Delf is more than satisfied with the Vi4. “I have loved using the desk and all of its features,” he noted. “It’s so easy to get round and everything you need is there in front of you. We let our support act use the desk too and their engineer had never seen one before the tour and by show two he was all over it. It’s very easy to use, sounds amazing and is so quick to learn. I couldn't ask for more. Bring on the Soundcraft Vi3000, that’s all I can say!”