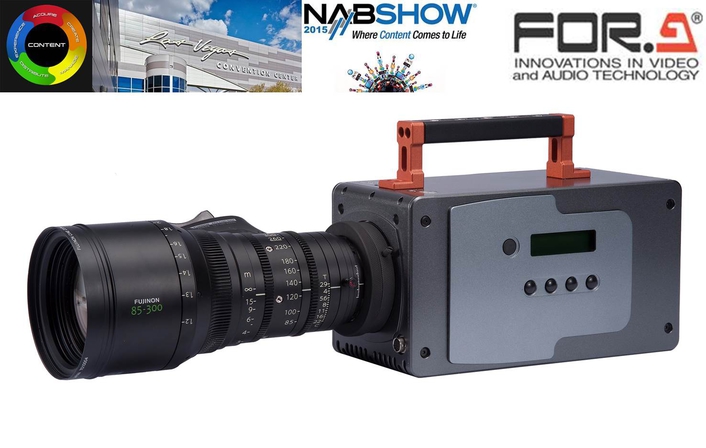 .
During the 2015 NAB Show next month, one highlight of FOR-A’s booth (C5117) will be the newest version of its 4K variable frame rate camera, the FT-ONE-S. Allowing for greater mobility, the FT-ONE-S is smaller and lighter than previous versions of the camera. The FT-ONE-S made its world debut at last November’s Inter BEE Show in Japan, and will be shown for the first time in America at NAB, which runs April 13-16 at the Las Vegas Convention Center.

Building on the breakthrough of super slow-motion 4K shooting, the FT-ONE-S allows users to separate the camera head from the body, enabling unprecedented shooting positions and angles for sports production and other live events. The camera links operators optically and via an intercom system, so that users can shoot from the field with up to one km distance between the unit and base station.

Sized at approximately 7.09 x 7.87 x 11.4 in. and weighing 194 oz., the camera head is smaller and lighter than that of the original FT-ONE camera, yet it remains full-featured. The unit can capture all of the action at up to 360 frames per second (fps). The FT-ONE-S also features a super 35 mm sensor and enhanced resistance to dust and water. It also includes the ability to color correct video output live using its 12-axis system, which is particularly useful for on-site color-matching between scenes, or when ensuring color consistency with video shot from other cameras.

The base station of the FT-ONE-S features solid construction, boasting the exceptional reliability that FOR-A prides itself on consistently providing to its customers. The base station was designed for installation in vans or where live events are covered, and eliminates the need for a control computer. Communication with the camera includes tally signals, shooting feedback and intercom functionality. Besides powering the camera head, the base station receives video and controls super slow-motion material.

Previous versions of the camera - the original award-winning FT-ONE, as well as the FT-ONE-OPT, which also features optical cable to allow shooting in the field with ease - will also be on display in FOR-A’s booth at the NAB Show. Both versions feature the ability to record 4K video at up to 900 fps.