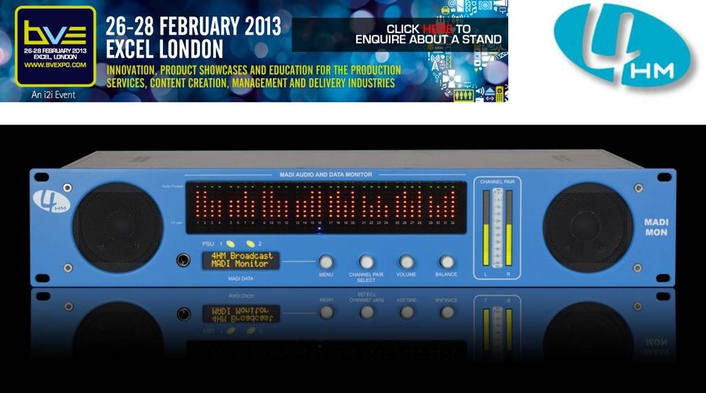 4HM will exhibit from Stand J43
4HM is to show its full range of MADI broadcast interfaces, breakouts routers and monitoring products at this year’s BVE show including their recently launched MADI-MON. The MADI-MON is a MADI monitoring device that uniquely permits the interrogation of the live MADI audio stream in order to view the status of embedded channels as well as providing integral MADI to AES format conversion as standard.

The MADI-MON is a world first for the UK company and enables auditioning of embedded channels without the user needing to connect external routers or audio consoles. In addition, MADI-MON is the first device to provide studio engineers with the tools necessary to interrogate the MADI stream in order to view the status of embedded channels.  Bargraph metering is provided for up to 32 stereo pairs (64 channels), whilst it also makes 32 pairs of balanced AES/EBU and unbalanced AES3-id available simultaneously for interconnection to broadcast routers, audio consoles or any other AES equipped devices and as with all 4HM products features a redundant power supply as standard.

The 1U MA64 MADI to multi-format AES converter will also be on demonstration. Available with either multi-mode or single-mode fibre operation and loop-through connectivity, the MA64 provides an ideal method of format conversion to both balanced and unbalanced AES simultaneously.

The SAM64 SDI to MADI/AES interface will also be exhibited by 4HM. The SAM64 has almost become the first thing on a broadcast engineer’s list when working out how to extract and distribute the audio from the SDI feed. Amongst its credits during the course of 2012 were coverage of Wimbledon, UEFA European Championships , the Olympics and Paralympics. SAM64 extracts 16 audio channels from each of the unit’s four SDI inputs to provide a total of 64 audio channels in both MADI (AES10id-2008) and AES3 (AES3-1992) formats. All SDI inputs independently auto-sense between 3G, HD and SD standards and are provided with loop-through connectivity for downstream equipment.

Other products to be shown by 4HM include the BOB/I-32, BOB/O-32 and ASBO AES audio breakout units.