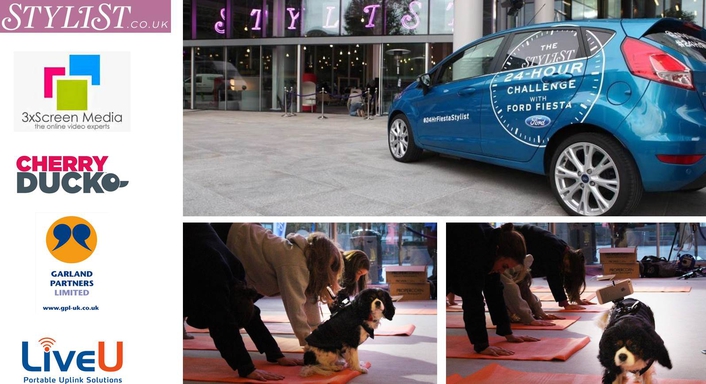 24-hour Stylist Magazine challenge captured from all angles
LiveU, a leader in portable live video-over-cellular solutions, has announced that London-based 3xScreen Media, a studio that provides live and on-demand online video services for agencies, corporates, events and sports, has deployed a wide range of LiveU technology to create innovative, live, multi-stream coverage of the Stylist Ford Fiesta 24-Hour Challenge. The star of the LiveU line-up was the live feed from the “doggie-cam”, sent using the new LU-Smart App on an iPhone 5S, mounted on the back of the adorable office dog McNulty.

The Challenge was to capture and live stream the creation of an issue of Stylist Magazine over a single 24 hour period – something that normally takes a week. To cover the event, Stylist hired production company Cherryduck whose team then turned to long-term LiveU customer 3xScreen Media to deliver a tailored live production and streaming solution.

Scott Robinson, 3xScreen Media Managing Director says, “Instead of just achieving the seamless delivery of a single, 24-hour continuous live stream, we delivered three simultaneous live streams over the 24-hour period. In addition to the unbroken coverage of the Stylist editorial team’s office, we set up live camera feeds in a Ford Fiesta to document their road trip to the Cotswolds and on the back of the office dog for the fun "doggie-cam”. Office dog McNulty - a bona-fide movie star and Twitter legend - had as much fun as we did!”

This solution saw 3xScreen and Cherryduck employ roaming wireless cameras including a steadycam, robotic cameras, GoPros, and for the first time in a 3xScreen live stream, two iPhone 5Ss with the LU-Smart App. While one of these was sending the live “doggie-cam” feed, the second was sent to the award-winning Duck and Waffle restaurant atop the Heron Tower. The stunning footage of the lights of London, captured by the cameraman as he rode the glass elevator to the highest restaurant in the UK was an impressive display of the LU Smart App’s capability. The Ford Fiesta was equipped with a LiveU LU40-S for cellular transmission as two staff from Stylist magazine hit the road, providing regular live crosses during the event. Three overall feeds were sent live via three LiveU LU70 backpack units to the Stylist website via 3xScreen’s central London MCR.

The technology was supplied by LiveU’s UK distributor Garland Partners Ltd., alongside a full service package.

Ronen Artman, LiveU’s VP Marketing, said, “3xScreen Media has been a long-term LiveU customer and has always pushed the boundaries; this challenge was clearly no exception. We are very pleased to see the advantages of our solutions-based approach being taken advantage of - where production companies and broadcasters can select the best cellular bonding product format for the output they want to achieve. In this case, a whole range of technologies has been deployed to create a truly modern and original production for today’s streaming-savvy audiences.”

About LiveU
LiveU is the pioneer of broadcast-quality, video-over-cellular solutions that allow live video transmission (HD and SD) from any location around the world.  With top-tier customers in 60+ countries, LiveU’s solutions have been used for breaking news and high-profile events, including the 2012 US Presidential Campaign, London 2012 Olympics, Hurricane Sandy, 2011 British Royal Wedding, Japanese Tsunami, GRAMMY Awards® and Super Bowl. From backpacks to smartphones, LiveU offers a complete range of devices for live video coverage. LiveU’s solutions include multiple 4G LTE/3G, HSPA+, WiMAX and Wi-Fi cellular links, which are optimized for maximum video quality based on the available