3D TV: Over half of Brits still cautious

Twenga asked over 3,000 European Internet users about their Christmas spending budgets
The results from the annual Christmas shopping survey for Twenga, the most comprehensive shopping search engine, show that 52% of Brits don’t want to receive a 3D TV for Christmas.

Although the Germans and the Dutch agree with the Brits, the French (57%), the Italian (69%) and the Spanish (61%) would like to find a 3D TV under their Christmas tree.

One of the main reasons they see for not being offered a 3D TV is the price: 32% of Brits and 48% of the Spanish find it too expensive. 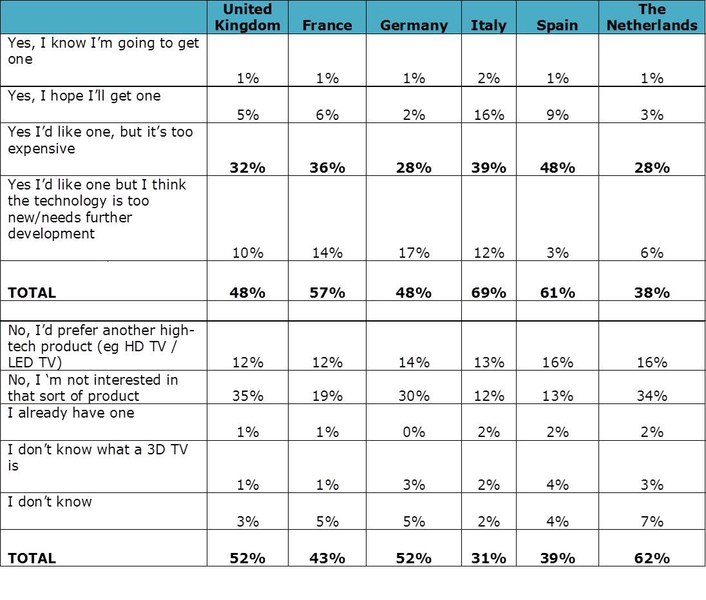 Twenga asked over 3,000 European Internet users about their Christmas spending budgets for this year and how they intend to use it. The study by Novamétrie was conducted online for Twenga between 27th September and 7th October 2010 using a representative sample of 3013 European Internet users from the United Kingdom, Germany, France, Italy, Spain and the Netherlands.

Twenga, the new-generation search engine enables millions of shoppers throughout the world to find what they want, at the best price, from the online shop of their choice.Thanks to its proprietary technology, Twenga automatically gathers offers from online retailers and displays them in one searchable interface. As a result, Twenga has the most comprehensive listing of online shops. Its search results are objective and not biased by commercial relationships.
Founded in 2006 by Bastien Duclaux and Cedric Anes, Twenga runs 15 sites, including the UK, France, Spain, Italy, Germany, the Netherlands, Poland, Brazil, Russia, the United States, Australia and India displaying 280 million offerings from more than 130,000 online shops. Twenga’s sites receive 40 million visits per month. In 2010, Twenga won the Red Herring 100 Global Award, Company of the Future Award for the Parisian area, the Young Technology Leader Award and the Ernst & Young Entrepreneur of the Year Award in the Company of the Future Category.