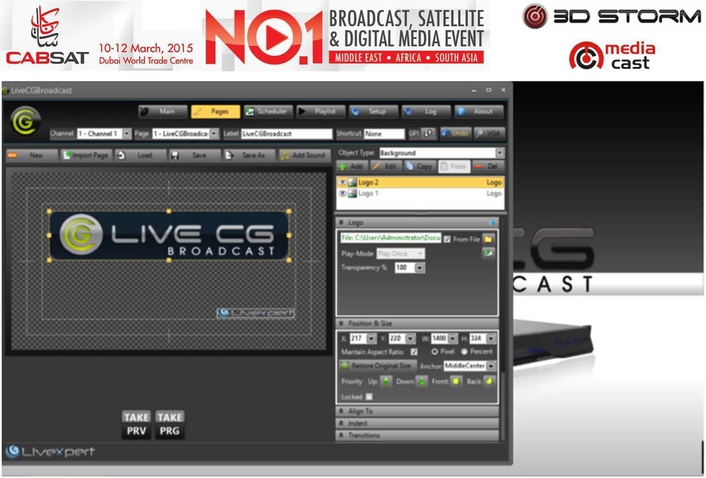 Find 3D Storm on Mediacast Stand D2-10 in Hall 2
3D Storm, distributor of LiveXpert products, chose CabSat to introduce LiveCG Broadcast, the multi-layer character generator, for the first time on the Middle East market. Partnering with Mediacast, a premier distributor of creative media technology in the Middle East, 3D Storm will present LiveCG Broadcast on their stand. Held in Dubai World Trade Center, from March 10th to 12th, CabSat is the meeting point of broadcast and television industry in the region.

LiveCG Broadcast is a powerful and innovative solution giving the ability to send all the graphics needed in a high-end professional television production directly to any video switcher. Made for all kind of production, election results, sports scores, and television game shows, LiveCG Broadcast eases the creation and display of information in real-time during live production, such as:

The system can generate all graphics as well as dynamic broadcasting of data from external sources: RSS feeds, text files, and Excel spreadsheets.

LiveCG Broadcast, one single solution in a 1U rack, makes social network integration easy and intuitive, and accessible to anyone. The system spots an exclusive Social Hub tool to display any content, like posts, messages, tweets, pictures and even sms, coming from various social platforms, Facebook, Twitter, Flickr, WhatsApp… The incoming feeds can be monitored, filtered and sent to go on-air in real-time. The Social Hub tool can easily be installed on a dedicated workstation, connected to LiveCG Broadcast USB port.Live CG Broadcast works with any video mixer and also integrates a direct IP interface to NewTek TriCaster and 3Play.

This year MediaCast has a larger stand that will include an end-to-end workflow demonstration, a dedicated post-production studio environment and a BroadCast/Live Studio environment, with demonstration of NewTek solutions including the TriCaster range, 3Play and the new TalkShow.

Already used by major stadiums and sports leagues, LiveCG Broadcast is a new standard in live production that will expand your audience and keep your viewers engaged with interesting, viral and high quality content.

About 3D Storm
3D Storm, official distributor of NewTek and LiveXpert products, is a leading player in the convergence of IT & the video broadcast industries.
Since 1999, 3D Storm has specialized in distribution and support for products developed by NewTek. 3D STORM offers cost-effective solutions and a full range of services, such as trainings in several languages for TriCaster, and 3Play, virtual sets design, as well as maintenance, repair and after-sales. LiveXpert is a range of tools carefully selected to make life easier for all video production operators. The key criteria are: time saving at every stage from set-up to take-down, user-friendliness and rationalized data exchange for workstations, optimized investment budget and operating costs, and great stability for live broadcasts.