A 1,5 Million HD Tapeless Project Awarded to VSN in Brazil 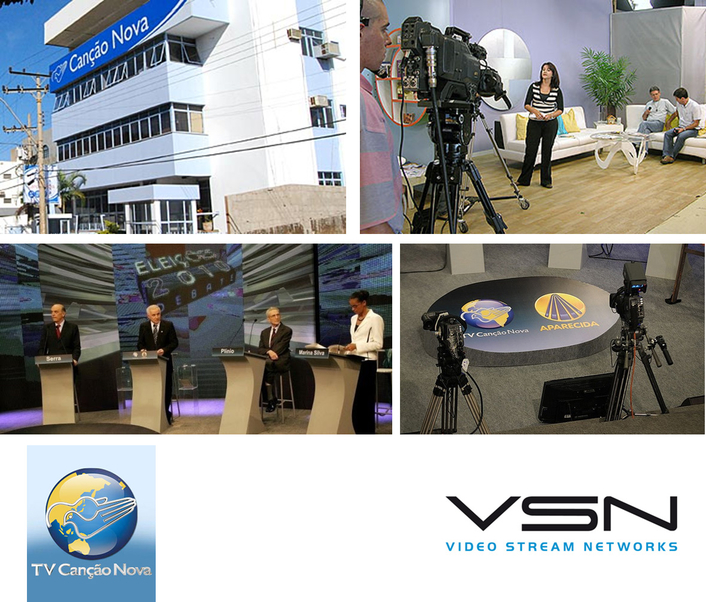 The channel, created in 1989, has consolidated as Brazil's largest Catholic broadcast station
TV Canção Nova becomes the reference of VSN's 'OneStop' concept thanks to the deployment of a complete, fully redundant, HD television system worth $ 1.5 million that includes news production and archive, automation for 4 channels and broadcast playout for 3 studios.

TV Canção Nova, a Catholic TV Channel managed by the Juan Pablo II Foundation, will be starting one of the most ambitious broadcast projects in Brazil. The channel, created in 1989, has consolidated as Brazil's largest Catholic broadcast station and for being the first featuring such a high level of complexity and integration in the country.

After a detailed technical specifications sheet and a rigorous process of selection for the best manufacturers in broadcast environments, VSN has been selected as the provider to guarantee a complete HD production and playout workflow, from ingest to archiving. As Mauricio Belonio and Danilo Gesualdo, Technical manager and IT manager of TV Canção Nova, said: "during the decision-making process, VSN stood out for their understanding of our project. We personally visited other installations with other clients from different countries. Also, they offered to us all the adaptations and customization needed to comply with the compulsory requisites of TV Canção Nova, which reinforced our final decision to make VSN the provider for our project."

The new installation, designed by the technical management of TV Canção Nova and VSN's engineering team, includes a 100% HD complete production system with 12 Apple FinalCutPro post-production islands that will be editing HD projects. In order to meet the channel's main requisite, the total lack of points of failure throughout the system, VSN ensures a total redundancy of all the critical elements in it (servers, database clusters, network infrastructure, storage, etc.) For this project, TV Canção Nova acquires a complete news production system vsnnews, with 40 concurrent news writing stations. From the news writing desks, the journalists and producers will be working on low-res clips generating EDL's that will be delivered to specialized servers for high-res consolidation thus giving the workflow a higher productivity level. The archive system vsnarchive will be controlling an LTO-5 robotic tape library with 400 slots.

The TV automation system vsnmulticom will be controlling the broadcast playout chain, with Harris Nexio video servers and Chyron character generators. Four VSN video servers with 4 playout channels each work in a dynamic configuration, with variable channel assignment depending on the use of TV Canção Nova's three production centers. The system also provides control and SMS processing as well as automatic web publishing. The station also has a scheduling system vsncreaTV to manage the programming schedule of the four channels, including asset management and broadcasting rights.

This installation is a symbol for VSN in the Brazilian market as it shows how powerful its range of solutions are in a 100% HD tapeless environment. The customer will have at its disposal a local support infrastructure via the VSN's affiliate in Brazil (VSN do Brasil). In the future, two additional TV Canção Nova production centers will be integrated in the system, both in Brazil and abroad, through vsnIPTransfer, VSN's content exchange solution over IP networks.