10-bit Accuracy a Must for Sky Italia’s Video Backbone 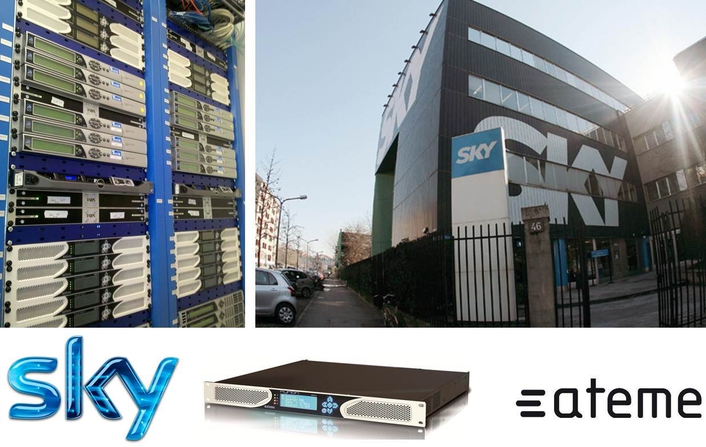 New multi-class contribution network taps ATEME’s compression technology
ATEME announced today that the new IP video network deployed by SKY Italia between Rome and Milan will use its contribution encoders and decoders for enhanced quality and bandwidth efficiency. The multi-channel service will span over 4 Points of Presence initially, and will be used for content exchange across sites, primary distribution, and disaster recovery.

A true multi-class service, the network integrated by CVE for SKY Italia is based on 10 Gbps and 2 Gbps circuits supporting low delay uncompressed video feeds on the optical layer, together with JPEG2000 and MPEG-4 compressed feeds over IP. All these services maintain a consistent 10-bit accuracy for video coding, thus avoiding any colour gradient distortions from the transmission. “The efficiency of the ATEME MPEG-4 4:2:2 10-bit compression allows SKY Italia to increase the number of channels transmitted while keeping the same backbone. Extra capacity will always be available on short notice by simply moving services to a higher compression efficiency” says Massimo Bertolotti, Head of Platform Engineering and Innovation at SKY Italia.

Quality and reliability were paramount criteria in SKY Italia’s selection of ATEME, which came after extensive tests. “During this trial period, and throughout the deployment, the support of our local partner CVE was instrumental in convincing SKY Italia and meeting all their expectations. We are delighted to be working with such a professional partner and look forward to the next projects” says Michel Artières, CEO of ATEME.

Sky Italia is the Italian pay-TV owned by News Corporation Limited. Launched in 2003 it has grown so rapidly as to reach 4,920,000 subscribers, as of March, 2011. SKY currently offers more than 190 thematic and pay-per-view channels, of which 36 are in HD, with a rich offer of cinema, sport, news, entertainment and programs for children. Thanks to the recent agreement signed with Fastweb you can also match Sky’s satellite television offer with the broadband internet and landline services of the telecommunication operator equipped with the most cutting edge network in Italy. You can access Sky’s offer via IP-TV too, and there is a selection of specific channels broadcast via Tv Mobile services.

Communication Video Engineering was formed in 2008 as an evolution from C.V.E. Spa founded by Catalano’s Family in 1982. Since then is a financially independant privately owned Corporation. C.V.E.’s technical staff is specialized in installing, commissioning and supporting complex systems for Broadcasting, DVB Transmission and Post-Production markets based on the most professional equipment produced by partners. Thanks to offices strategically positioned in Milan and Rome, C.V.E. covers the whole Italian territory to supply assistance for any kind of project and/or equipment.