“My Clients Are Noticing The Difference” 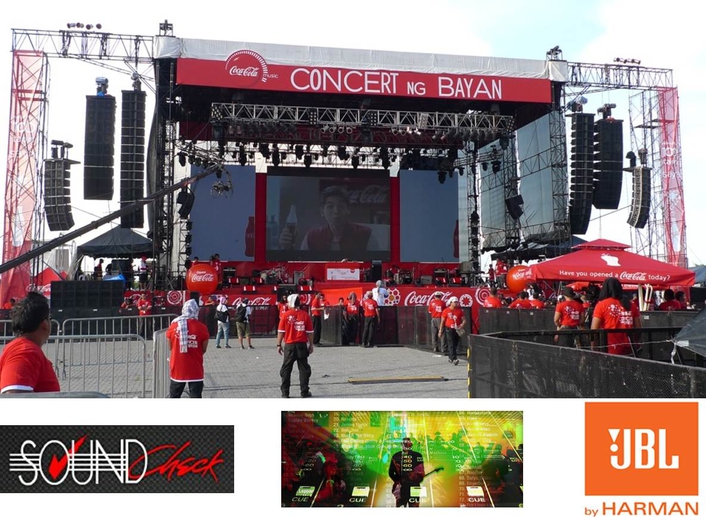 Soundcheck recently deployed a JBL VERTEC line array system with the new V5 VERTEC preset tunings at the Coca-Cola Concert
Soundcheck is one of the Philippines’ top audio contractors and has handled the live sound for artists including Rihanna, Chris Brown, Incubus, Beyoncé, Linkin Park, Christina Aguilera and many others. The company has used HARMAN’s JBL VerTec® line arrays since their introduction, in situations from indoor corporate events to outdoor shows for major international touring acts. Soundcheck just upgraded to JBL’s new V5 VerTec preset tunings and its clients are hearing the improvement.

“We installed the V5 DSP presets in all of the VerTec VT4888 and VT4888DP line arrays in our inventory, in the speakers’ DrivePack DPDA input modules,” said Jaime Godinez, owner and chief engineer of Soundcheck. “After installing the V5 upgrade and testing the speakers by running pre-recorded music for them for hours, we sent them out for a major local show right away. We went through the show without a hitch—and have since done more than 60 shows with them including a few large open-air concerts.”

“When JBL introduced the V4 presets a few years ago I felt that they had given new life to the VerTec system. But the improvement offered by the V5 is even more significant,” Godinez continued. “The improvement in clarity, balance and coverage have made me fall in love with our audio systems all over again. But most importantly, my clients are noticing the difference between our sound and that of the competition.”

“No comments I can give can adequately convey the experience of actually hearing the sonic improvements that V5 provides, especially in an open-air environment,” Godinez noted. “I’ll try by giving one example. Last March I was mixing the Coca-Cola Concert ng Bayan at the SM Mall of Asia, which celebrated 100 years of Coca-Cola in the Philippines. The concert featured around 20 performers and I brought 32 VerTec VT4888’s for the main front of house.”

“The sound was so transparent and ‘in your face’ that many times during the night I had to double-check to see whether my near-field monitors were off or on, as the sound from the VerTec arrays seemed to be coming from that close.”

Godinez pointed out that he has to add more gain to the VT4888’s using V5 to keep some mixing consoles from being driven too hot. “It’s just something you have to pay attention to,” he said. “With V5 you might have to make an adjustment to the gain of the DriveRack modules compared to the settings you’d use with the V4, to make sure the gain between the board, speakers and the rest of the system is optimized.”

“Another big benefit we found is that using the V5 presets enables us to set the systems up faster,” Godinez concluded.

SOUNDCHECK was conceptualized in 1991 and incorporated in March 1992 by a group of experienced professionals with strong background in sound and light engineering and management.With the technical expertise of the group, SOUNDCHECK acquired an array of equipment meeting or even surpassing local and international standards, making SOUNDCHECK a force to reckon with in the sound system industry. The company also ventured into consultancy and pipe-in/paging installation and design at first just for friends, then on a larger scale in 1998.

To enable the company to service their clientele more completely, SOUNDCHECK also began acquiring state-of-the-art lighting equipment in early 1998. At the start of 2004, SOUNDCHECK expanded the sound system group with the acquisition of three (3) Digital Mixing Boards, Line Array Speakers and their peripherals.To-date, SOUNDCHECK has invested over P30.0 million in sound and lighting equipment aside from the unquantifiable 12 years experience earned by their loyal technical staff.