.
Every year a different German city holds a major celebration of the momentous events of November 1989, when the process of opening the Berlin Wall - and the reunification of Germany - began. This year Munich was the host and a Yamaha CL5 system was brought in to deliver high quality audio throughout a huge area.

The two day-long Tag der Deutschen Einheit (Day of German Unity) festival saw events taking place along the city’s 1.3km (0.8m) long Ludwigstrasse. A total of 400,000 people enjoyed a wide range of entertainment, but the size of the space meant that installing a suitable audio system was a major challenge.

German audio specialist Neumann & Müller was tasked with managing the location’s sound requirements and, as one of the first to invest in the CL series - and having used it very successfully at UEFA EURO 2012 matches this summer - N&M project manager Johannes Pippig knew it could deliver the required coverage and versatility a straightforward manner.

“We had to provide continuous coverage, both for safely announcements and for the big closing event,” says Johannes. “Covering a 1.3km long street was a challenge, but using a CL system with a Dante network made it a lot more straightforward than using any other system.”

Two Dante networks with Gigabit switches were installed along the whole length of Ludwigstrasse (the second just for full redundancy). Six Yamaha Rio3224-D I/O units were distributed along the network, which took microphone and line inputs from nine separate performance platforms and included stages at each end of Ludwigstrasse.

All signals were sent over the Dante network to a single CL5 digital console, with the mixes sent to a total of 19 separate loudspeaker arrays via the Rio units. With these being positioned throughout the length of Ludwigstrasse, this meant that the PA feeds could be done using analogue cabling from the nearest I/O unit, but with no noise issues. The Rios were also used to send audio to the wired and wireless in-ear monitor systems used by all the performers.

“Operationally the combination of the CL series and Dante was fantastic,” says Johannes. “We used Dante Controller to set the system up, which recognised the Yamaha devices instantly. After the network was set up, it ran flawlessly and completely unobtrusively.

“The only major practical issue we had with setting up the system was having to keep all escape routes, side entrances and other thoroughfares clear. We achieved this by using cable bridges and it worked very well.”

As well as live performances by rock band Karat and other performers, the 40-minute, multimedia spectacular that brought Tag der Deutschen Einheit to a close featured pyrotechnics, lasers, lighting and video projections at eight different locations, all managed by a Dataton Watchout system. This also delivered audio playback and pre-recorded ‘god voice’ voiceovers for the performance to the CL5 console.

One problem with mixing the production was having a single mix position for what was effectively a 1.3km long stage. Here, ‘old-tech’ interfaced seamlessly with ‘new-tech’ to provide an effective solution.

“The CL5 was located on the second floor on in one of the buildings which line the Ludwigstrasse and we couldn’t hear all the PA systems well enough to do a good mix. But it was the only possible position where we could see a reasonable length of the street,” says Johannes. 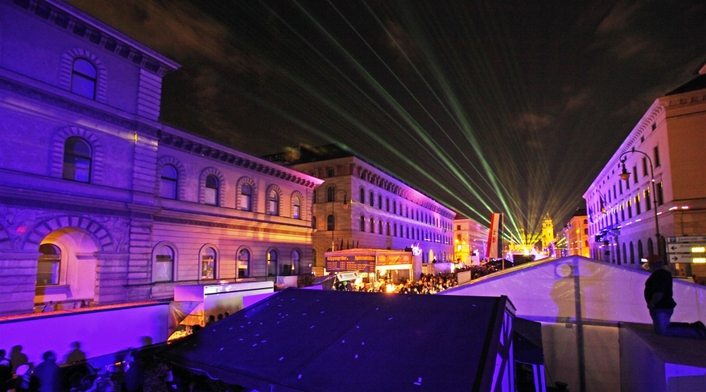 “Our original plan was to have a number of WiFi access points and use the StageMix iPad app to control the CL5. The problem with that was the mix engineer and I would have had to be in several places at the same time! So we positioned audio technicians at several places along the street, who were in radio contact with us at the console. This actually worked very well and we were very happy with what we achieved.”

Overall the festival was a major success and, being the first to feature a Yamaha CL system, Johannes was very impressed with the difference it made.

“At an event with such a huge area to cover, the system was a very practical, easy and reliable solution,” he says. “It worked perfectly throughout the event and we look forward to overcoming further large-scale challenges with it in the future.”