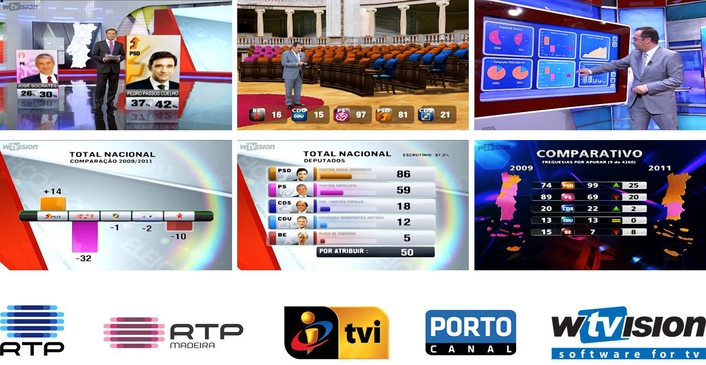 All the projects had the wTVision’s Elections CG product as the software platform
wTVision provided graphics solutions to 4 TV channels, in Portugal, for the electoral night on the 5th of June. RTP, TVI, RTP Madeira and Porto Canal presented their viewers special elections programs with a broad range of interactive graphics in full screen, tickers, augmented reality functionalities and virtual graphics, besides the integration with social networks such as Facebook and Twitter.

RTP had a production based in interactive technologies and augmented reality, showing the electoral results through virtual graphics. An iPad gave the journalist full control over the flow of the presentation, choosing which graphics the public would see on TV. A led wall , also controlled by iPad, helped the host displaying electoral charts which could be shown in full screen for the viewers. All this technology was supported by a strong scenario that had several elements, such a suspended cylinder where electoral projections and results were shown, along the main candidates’ pictures, and a second led wall portraiting the new parliament members. Besides the studio solution, RTP gave its viewers an iPad application, created by wTVision, that fed those devices with the election’s results, in real-time.

The major innovation on TVI was the usage, for the first time in Portugal, of a HITUI (Human Interaction Technology and User Interface) on a virtual scenery, controlling a virtual parliament through an iPad , giving the viewers a broader perspective of the historic results since 1975, and parliamentary projections and results. A led wall controlled by a touch screen, full screen graphics and a ticker with projections and results completed this scenario. This project also allowed several electoral data analysis such as: potential coalitions, gains and losses, places with higher and lower votes, results updates, among others.

Porto Canal displayed the electoral results through full screen graphics with the electoral projections from all the 3 major Portuguese TV channels and an electoral map with the winning party’s colors.Vodafone gave its Vodafone TV users the chance to access an application, developed by wTVision, which gave them an interactive approach to the election’s results, in real-time.

All the projects had the wTVision’s Elections CG product as the software platform, a highly customizable program that handles all the prime functions required by a special electoral TV program.wTVision already provided more than 50 special electoral programs, integrating and developing information graphics state-of-the-art technologies, in several countries.