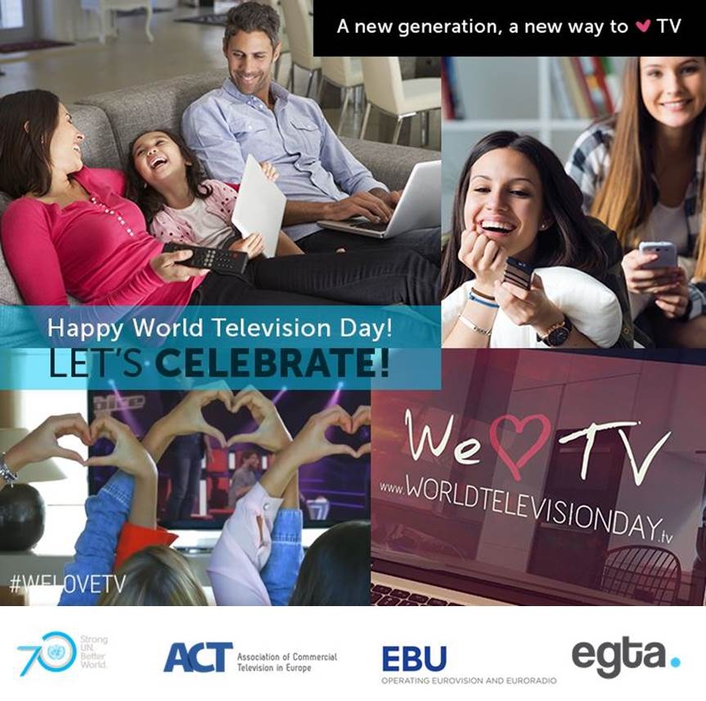 Young audiences are the focus of this year’s celebration of World Television Day on 21 November – as declared by the United Nations in 1996. On this occasion the European Broadcasting Union (EBU), the Association of Commercial Television in Europe (ACT) and EGTA, the Brussels-based association of television and radio sales houses once again/for the third consecutive time joined forces to celebrate this day.

A 30-second video highlighting the role TV plays in the lives of young people. This clip will be broadcast by televisions across Europe, Asia, Canada, USA and Australia tomorrow.

The video reflects how young audiences across the world now watch programmes on various devices, including mobile phones and tablets. It shows them forming the popular heart shape with their hands to echo the sentiment of World TV Day which is We Love TV.

Broadcasters can add their own local/ national content to the video before airing the clip across their networks or online portals.

Television is proving popular among young audiences with those in Europe aged 15–24 years old watching on average 2.11 hours* of TV a day. As much as 94.5%** of that time is spent watching live television.

To celebrate their love of television, viewers are encouraged to use the hashtags #WeloveTV and #WorldTVDay on social networks on 21 November.

EBU Director-General Ingrid Deltenre states that today’s anniversary is a timely reminder of the golden age of television we are living in.
“There is more, and better quality TV content than ever before and as consumers we have so much more choice about how to enjoy it all, since it is available to us whenever and wherever we want. This year’s theme is key to our industry; we need fresh young talent to work with us and to learn from in order to be even more relevant in the future than we are today. Once again, I am glad to see so many partners joining forces worldwide to celebrate a medium that has managed to stay relevant by reinventing itself in numerous ways.”

EGTA President Jan Isenbart says today’s TV is all about choice and ubiquity.
“Let’s not forget that it was the established linear TV channels that opened the doors for time-shifted and on-demand viewing. Young viewers have embraced the new opportunities to watch premium video content anytime, anywhere and on any device more enthusiastically than any other target group, without abandoning the central role of the big screen in the living-room. In fact, the vast majority of their total viewing continues to be on the TV set (76% in Germany, for instance***). With almost unlimited options, television has entered a second golden age for content producers, advertisers and viewers alike.”

Chairman of the ACT Board of Directors Magnus Brooke says commercial broadcasters need to offer the audience the opportunity to consume content wherever and whenever they want it.
“Of course, young people are leading the way in consuming content in different ways, though young viewers still continue to consume a lot of content via linear TV as well as on a number of other platforms. We will continue to adapt to their needs to deliver the best and most innovative services that inform and entertain Europe.”

UN Regional Information Centre Deputy Director Caroline Petit says World Television Day was proclaimed an annual event by the United Nations in 1996 in recognition of the impact television increasingly has on decision-makers.

“World Leaders have recently adopted 17 Sustainable Development Goals. They can only be a success if people – especially the youth – know about them. TV has the potential to help sharpen the understanding of the goals and other global topics” Ms Petit said. “TV’s power lies in its ability to reach people by sending strong images and illustrate complex developments.”

The three associations also gathered research and figures about young viewers’ media consumption, which can be found here: http://www.worldtelevisionday.com/facts-and-figures/

ABOUT ACT
The Association of Commercial Television in Europe (ACT) represents the interests of leading commercial broadcasters in 37 European countries. The ACT member companies finance, produce, promote and distribute content and services benefiting millions of Europeans across all platforms. ACT engages with the EU institutions to achieve a balanced and appropriate regulatory framework which will encourage further investment and growth in our sector.

ABOUT EBU
The European Broadcasting Union (EBU) is the world’s foremost alliance of public service media (PSM). Our mission is to make PSM indispensable.
We have 73 Active Members in 56 countries in Europe, and an additional 21 Associate Members in Asia, Africa and the Americas.
Our Members operate over 1,800 television and radio channels, broadcasting in more than 120 different languages. They reach audiences of more than one billion people around the world.
Our television and radio services operate under the trademarks of Eurovision and Euroradio.
Eurovision is the media industry’s premier distributor and producer of top-quality live news, sport, entertainment, culture and music content.
Euroradio enhances public service radio with music and news exchanges, professional networking, and by promoting digital and hybrid radio.
We have offices in Brussels, Rome, Moscow New York, Washington DC, Singapore, and Beijing. Our headquarters are in Geneva.

ABOUT EGTA
EGTA is the association representing television and radio sales houses, either independent from the channel or in-house, that markets the advertising space of both private and public television and radio stations throughout Europe and beyond. EGTA fulfils different functions for its members in fields of activities as diversified as regulatory issues, audience measurement, sales methods, interactivity, cross-media, technical standards, new media, etc. During its 40 years’ existence, EGTA has become the reference centre for television and radio advertising in Europe. EGTA counts 128 members operating across 37 countries.

ABOUT UNRIC
The Brussels-based United Nations Regional Information Centre for Europe – UNRIC – provides information on UN activities to 22 countries and is active on social media and websites in 13 languages. It acts as the European communication office of the United Nations and its aim is to engage and inform European citizens about global issues. It also liaises with institutions of the European Union in the field of information. Its outreach activities, joint public information campaigns and events are organized with partners including the EU, governments, the media, NGOs, the creative community, and local authorities.