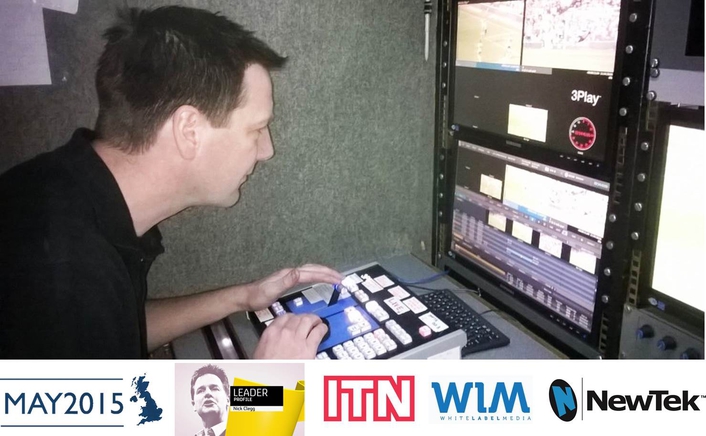 For the election, 3Play was used for recent coverage of local televised election debates for local broadcaster Mustard TV in Norwich, and will be in Sheffield on Election Night to provide OB facilities, including unilateral feeds for ITN, Sky and the BBC.

“We will use the 3Play to record the programme output and camera ISOs, giving us the ability to put together edits on the fly for inclusion in the ‘live’ output, whilst ensuring we are still capturing all cameras as a failsafe,” said Dan Haddon, Managing Director, White Label. “The delayed record function is likely to prove extremely useful - for example, if Nick Clegg arrives and we are not live to air, we can hit the delayed record and we will be ready to play in ‘as live’ as soon as the broadcasters come to us.

“It’s going to be a fast-paced environment on the night, so we need to have as many options available to us as possible. The functionality of the 3Play gives us the peace of mind of knowing that everything will be captured and ready to roll in at the press of a button.”

Earlier in the year White Label upgraded its six-camera OB truck to HD, and chose a NewTek 3Play sports production solution as a feature-rich yet cost-effective replacement for its outgoing EVS system. It integrates fully into the new file-based truck design, with all signals carried over fibre.

3Play has already proved invaluable for White Label’s live football coverage, enabling them to run slow-motion clips of all camera angles, build a highlights play list for half and full time play-out, and provide an extended highlights package at full-time for those broadcasters not taking a live feed. 3Play has also been used extensively for covering live cinema events, where the edit facility affords the opportunity of a quick turn-around for red carpet material, which can be clipped up and incorporated into the pre-show content ahead of the main event.