Royal Family Holland and the Queen’s Banquet Amsterdam
W-DMX BlackBox ran Luminair and controlled GlowUp fixtures during the dinner, which was attended by royal heads of state from 18 countries. Among the many notables on hand were Britain's Prince Charles and his wife Camilla, and the Japanese Crown Prince Naruhito and Crown Princess Masako. W-DMX for the banquet was supplied by Keylight Design & Supply in The Netherlands.

Later that day, the Ahoy arena in Rotterdam hosted a very special concert marking the interval between the Queen’s abdication and the new King’s induction, featuring the Dutch national song, specially written and produced for the King. The Song for the King was performed in the presence of the King and Queen at the EYE Film Museum via a video link from Ahoy Rotterdam.

Ahoy provides power rails and powerlock at catwalk level at a generous 400Amp per quadrant, enabling the power source to be delivered exactly where it’s needed, minimising cabling. Then the only cable to be set up would normally be DMX cable, but with just four bridges accessible via the ends of the bridges, that would entail using enormous runs of DMX cables. 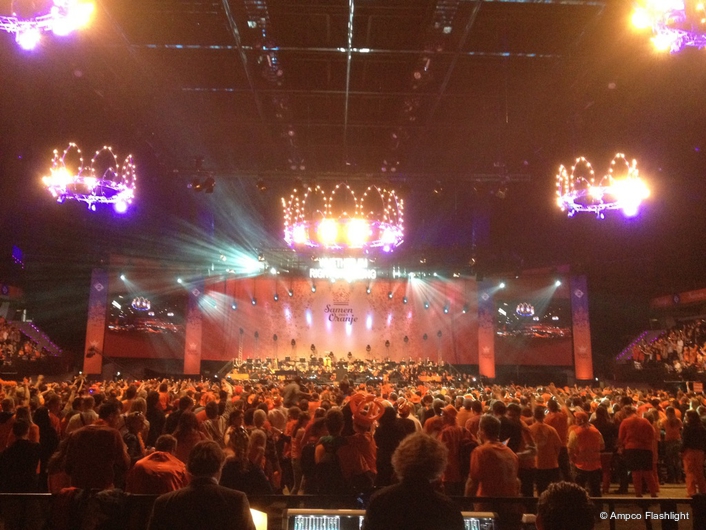 Two challenges had to be surmounted: first, the amount of steel in the environment from both rigging points and the building’s construction, and secondly, the type of wireless access points provided by telecom companies nowadays. In most venues, the 2.4GHz band can be full – and thus almost impossible to get a full strength signal for a reliable system. Add the possibility that telecom companies boost their system when demands increase, and your system could be operational at setup time, yet fail when doors open.

Project Manager Michel Bisschops was sceptical in the beginning, but System Engineer Christiaan Schutte convinced him that all these challenges could be minimised. The W-DMX G4 technology employed by Wireless Solution gave the AF team the perfect solution to avoid the parts of the spectrum.

All systems were set up on a G4 broadcast and the use of directional antennae from Wireless Solution gave the AF teams a totally reliable system. Even on the far end of the venue, a full range of bars on the indicator meant a completely reliable set throughout the evening.

“We are always so proud to be represented on events of this scale,” said Niclas Arvidsson, CEO of Wireless Solution, “It’s truly an honour to be specified on something this important, and even better to deliver what we promise.”

Wireless Solution Sweden is the world’s leading manufacturer of Wireless lighting control equipment, now celebrating 225,000 units sold worldwide and over 45 OEM partners. Hailed for its reliability and ease of use, Wireless Solution’s W-DMX range of products is the consistent choice for top professionals in the lighting industry and specified with perfect results in high-profile events and installations around the world. W-DMX is also hailed as the best wireless OEM solution. W-DMX has been used in major lighting applications including the Marina Bay Sands In Singapore, Lady Gaga, Beyonce, Coldplay, Justin Bieber, Super Bowl and the Olympic Games.