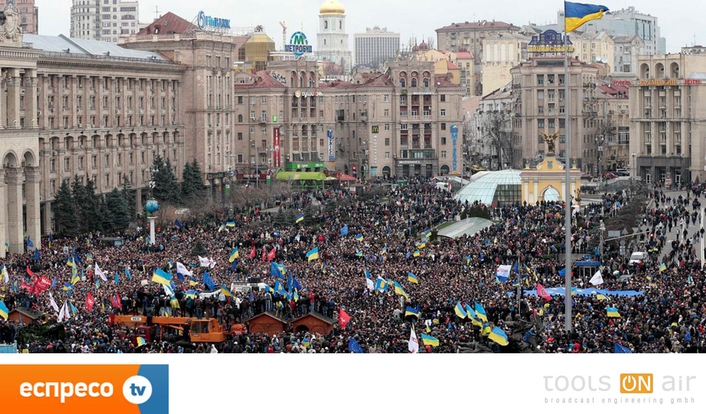 .
For journalists, being at the epicenter of a historical event is more than just exciting - it's a game changer. And at the newly opened studios of Espresso TV, that's exactly what's happening.

Espreso TV took to the airwaves in late November, offering a mix of news, business, sports, and culture to viewers across the Ukranian region. Within days of going live, the station was surrounded as civil protests erupted over the government's decision to abandon an association pact with the European Union. With an estimated 200,000 demonstrators flooding the city's Independence Square, the news was quite literally happening right around them.

Being able to respond to events as they unfold is what journalism is all about, and Espreso TV's new setup enabled them to do just that. The station's broadcast facility is outfitted with a powerful Mac-based system based around ToolsOnAir's Broadcast Suite of applications designed to provide broadcast video professionals with a highly customizable TV Station in a Mac. As the station's technical director Alexander Korostyshevsky explains, the system provides a powerful, stable, and cost-effective solution to empower reporters and staff to create and disseminate the news as fast as it happens.

"Using ToolsOnAir's just:in, we are able to gather footage from multiple camera sources at once, editing and creating an EDL in real time," says Korostyshevsky. The station's Mac computers are equipped with multi-channel I/O cards from AJA and Blackmagic Design, and just:in enables the system to handle up to eight channels of HD video into a single machine.

Production and playout are equally streamlined. Chief editors Vadim Denisenko and Vitaly Pyrovych assemble and edit multiple playlists on the fly via ToolsOnAir's just:live and just:play, including the integration of an active lower third crawl to integrate a real-time news feed. The team uses CompositionBuilder to create custom composite graphic overlays.

"The eyes of the world are on Kiev, and it is critically important for them to receive information that is accurate, and current," says Korostyshevsky. "The ToolsOnAir system enables us to assemble and broadcast content quickly and efficiently. It's a fantastic system."

"There is no greater reward for us than to see our solutions being used to broadcast such important events to the world," added ToolsOnAir Global Sales Director Bruce Straight. "Espreso TV's reporters are out there in the midst of these demonstrations, braving police crackdowns and sub-zero temperatures to report on events that touch us all. We feel particularly privileged to be able to make a small contribution to their efforts."

ToolsOnAir Chooses Sonnet...tation in a Mac' Solution
Zest 4 TV Does it in Real Time with ToolsOnAir
24 Kitchen Makes it Fresh with  ToolsOnAir