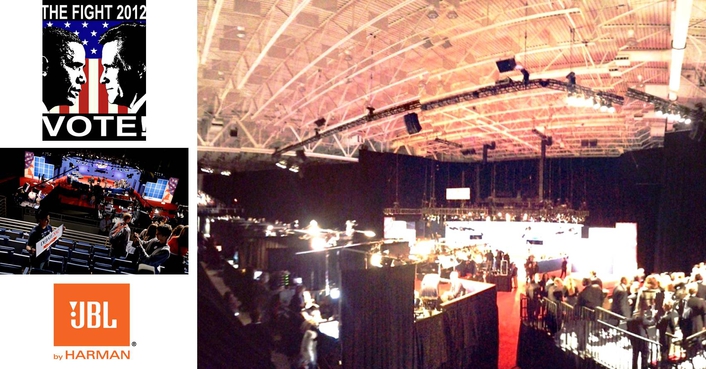 The audio system for each event remained consistent across the different locations, with JBL VRX932LA portable line arrays arranged in clusters of two each in left-center-right configurations, with two additional delay fills of two VRX932LA loudspeakers each. Crown I-Tech 4x3500HD amplifiers powered the system, with processing handled by a dbx SC32.

Larry Estrin served as Audio and Production Communications Director for the Commission on Presidential Debates, overseeing the audio/video systems for each event. “High-profile events such as the presidential and vice presidential debates leave zero margin for error when it comes to the audio reinforcement system—it is imperative that the system performs flawlessly,” Estrin said. “As was the case during the debates four years ago, the JBL loudspeakers once again delivered high-quality, reliable sound.”

While On Stage Audio’s Chicago-based facility provided similar audio system packages for each of these three locations, JBL’s ability to provide a variety of loudspeakers for different needs helped overcome any acoustical challenges that may have arose in each venue.

“The combination of JBL VRX loudspeakers, Crown amplifiers and dbx processing gave us a high-performing and consistent audio system that we were able to deploy in several different environments,” said Jim Risgin, Vice President of On Stage Audio.