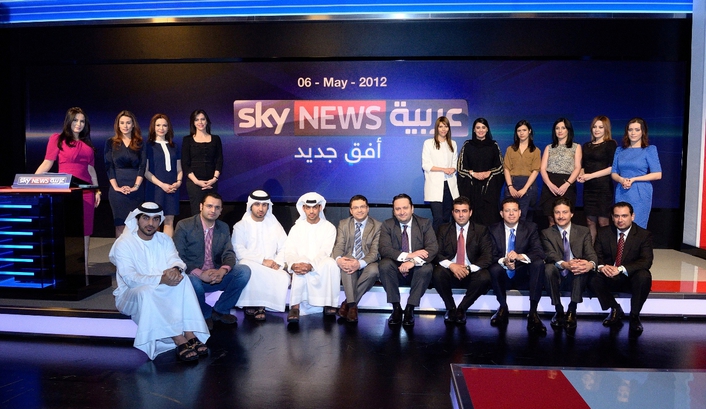 Channel committed to delivering fast, live, impartial news across multiple platforms
Sky News Arabia, the 24-hour Arabic language multi-platform breaking news service, will launch on 6th May, 2012. The channel, which promises “a new horizon” for news reporting across the Arab world, will be available on Transponder 14 on Arabsat Badr 4, Transponder 15 on Nilesat 201, on du IPTV and e-Life platforms plus in high definition on the OSN pay-TV platform.

The announcement was made during a press conference held by the head of the channel, Nart Bouran, at Sky News Arabia’s state of the art studios in Abu Dhabi.

Commenting on the launch of the channel, Bouran said: “The Sky News Arabia idea was born more than two years ago. Our aim has been to create an impartial and independent breaking news channel for the Arab world across multiple platforms. It has been a huge collaborative team effort resulting in the most technically advanced news operation in the region. We have nearly 400 of the best journalists, reporters, presenters, producers and broadcast technicians working together to create an unparalleled news channel.’

“Sky News Arabia will offer the MENA region a fresh approach to television news with an independent editorial mandate at the heart of everything we do.”

The channel is supported by an Editorial Advisory Committee – a first for the region - to ensure Sky News Arabia delivers fair, accurate, consistent and independent news.

James Zogby, Chairman of the Editorial Advisory Committee, commented: “We are looking forward to working with Sky News Arabia to support the channel’s aim to present an independent evaluation of the news agenda, free of external influence. It will have clear, unambiguous standards, upheld by an editorial charter that sets the framework for world-class news delivery as well as creating a new culture for Arab journalism.”

The Sky News Arabia digital news platform has been active since the website, www.skynewsarabia.com , launched in Beta format in February, and social media channels have attracted more than 100,000 fans on Facebook and Twitter. The broadcast platform has been in 24-hour rehearsals ahead of launch and recently revealed the 16 presenters from across the MENA region who will anchor the channel. The presenters were chosen following a rigorous interview process and in-depth market research, each having the experience and personality to reinforce Sky News Arabia’s dynamic approach to delivering the best live news coverage as it happens.