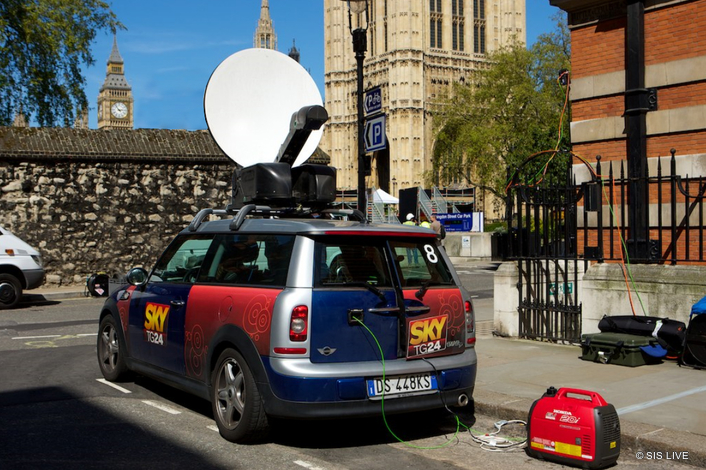 David Meynell, Managing Director, SIS LIVE, says: “The scale of the SIS LIVE news operation in the UK is quite staggering and we provided approximately 70 live satellite links from across the country utilising our contract and ad-hoc SNG truck fleet, along with a number of IP vehicles operating to our iDirect satellite Hub in Milton Keynes. We also provided the UK broadcast industry with 500 MHz of satellite capacity, some permanently contracted to the BBC, Sky, ITV, ITN and Channel Five, with a significant amount supplied from our large pool of ad-hoc capacity. No other provider in Europe could get anywhere close to the service that we can now provide and it is a testament to the quality of our equipment and the dedication of our staff that SIS LIVE can offer coverage on such a scale and subsequently receive tremendous feedback from our customers.”

Jackie Faulkner, Head of Operations, Sky News, says: “SIS LIVE offered us a great service with our contract trucks, additional trucks and double crewing which enabled us to offer the first ever UK election coverage in HD. We brought viewers all the important action and results as they happened from all corners of the UK”

Sky Italia’s Mini Micro also transmitted LIVE news feeds to Italy. The Mini’s small ‘footprint’ made parking in a narrow side street easy and the fully automated uPod Micro satellite uplink allowed transmissions at the push of a button.

Paul Stevenson, Director of Technical Operations and Technology for News Operations at ITV, says: “Our teams worked with SIS LIVE to bring our viewers unprecedented coverage of the election from across the UK, with uPod uplinks relaying reports back for the best UK regional coverage and inserts into the national news.”

Two SIS LIVE OB trucks and numerous uplink vehicles have been positioned outside Buckingham Palace ready to cover the new Prime Minster arriving to meet the Queen, whenever that may be!