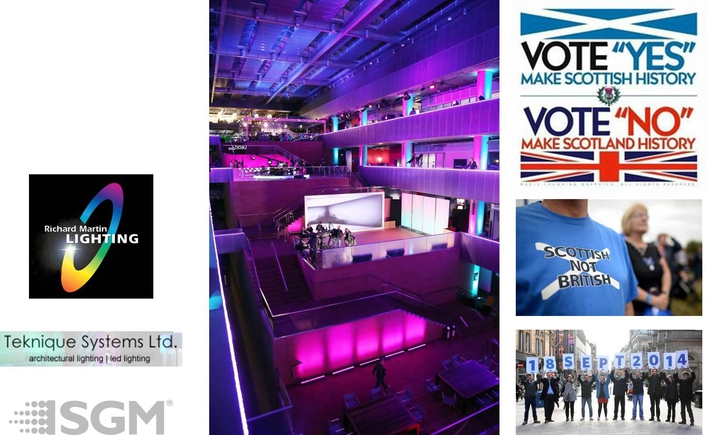 ‘The Street’ at Pacific Quay on Referendum Night, illuminated with SGM P-5s
Two TV rental specialists — one operating in London and one in Glasgow — pooled their respective SGM inventories to great effect recently during the recent Scottish Independence Referendum.

The live televised debate between Alistair Darling (leading the ‘No’ campaign) and Alex Salmond (Scotland’s First Minister, heading the drive for Independence) — held at the historic Kelvingrove Art Gallery and Museum — was followed by the action through the night as the votes were counted. This took place in ‘The Street’, the central atrium area of the ultra-modern £72m BBC Pacific Quay, which only opened seven years ago.

“We handle all the lighting hires and technical support for RML in Scotland,” confirmed Tony Kennedy. “It means that production companies and LDs get the same level of service on a local basis.”He was first introduced to the P-5s at last year’s PLASA Show in London. “I liked the fixture and thought it was the right product to introduce to our hire stock,” he said. “It also seemed a good product to cross hire with RML when required, as we wanted a high output fixture for various jobs.” 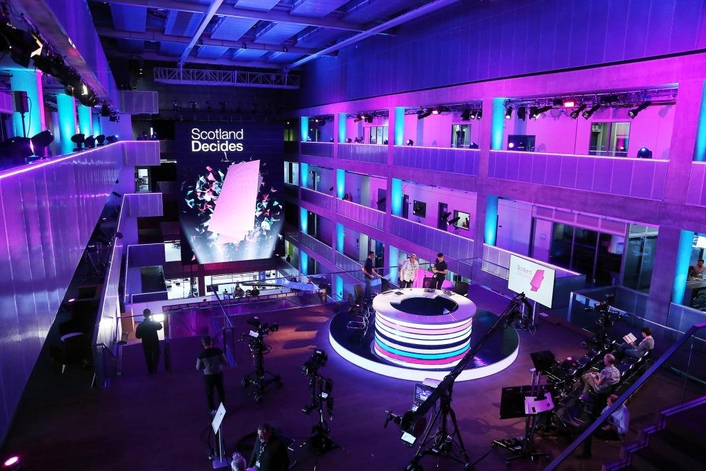 ‘The Street’ at Pacific Quay on Referendum Night, illuminated with SGM P-5s

Teknique Systems first demoed RML’s inventory at the beginning of the year on the Celtic Connections Festival at new Glasgow venue, The Hydro, “and this convinced us that this was serious bit of kit,” he said.

“As a high output fixture with long throw and low power consumption I could see how we could use them (with the 23° lens option) at both these referendum events.”

Flown from lighting bars, they lit up the Pacific Quay atrium and fabric of the building during the network broadcast on referendum night itself as millions tuned in to watch the votes being returned and counted (with presenters Jeremy Vine and Hugh Edwards). “We also incorporated four SGM Q-7 [RGBW flood] fixtures at low level for a colour wash, as these units have a great wide angle lens,” he continued.

In addition, 12 P-5s (from RML) were used to illuminate the Scottish Parliament Building in Edinburgh as the backdrop for all the Media Village reports leading up to the final result.

Summing up, Tony Kennedy says, “The P-5 is a great product, has built in wi-fi, comes with various lens options and delivers high output from low power consumption. In addition, it has very good build quality and is IP65-rated — so it’s usable both inside or outside … which is a real bonus for us.”