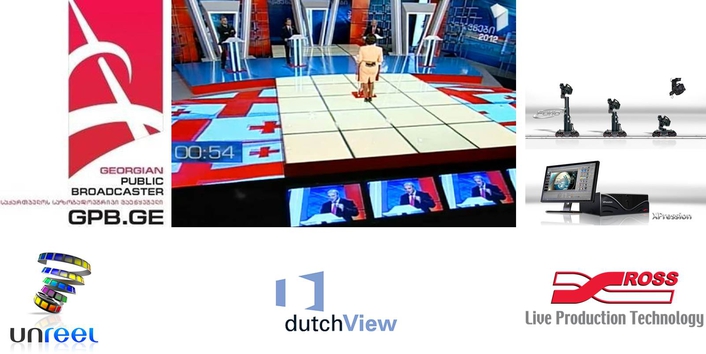 “There were a few challenges, but it was amazing how GPB, Ross, Unreel and Prographics worked together to surpass each hurdle,” said Giorgi Baratashvil, head of technical development at Georgian Public Broadcaster. “There was a lot to do in a very short time frame and we were immensely impressed with how Ross commissioned the system and trained our staff.  On the night of the election, GPB was able to run everything ourselves flawlessly and the election production was a huge success.”

“It’s inspiring to be part of creating top-end professionalism to cover elections and seeing how hard GPB pushed XPression with non-stop complex effects!” said David Ross, CEO, Ross Video.  “GPB was able to utilize something from almost all of our product lines, giving them a one-stop shop with Ross.  The breadth of our product offerings now allows us to focus more on providing solutions to our customers, rather than just delivering a box.  It’s exciting to expand our business in EMEA this way.”

DutchView is the biggest media facilities company in the Netherlands. DutchView invest in new technologies to make sustainable productions possible. To provide recordings for tv, radio and the Internet, we run 14 studio’s in Amsterdam and Hilversum and a fleet of three Music vans and six outside broadcast vans.