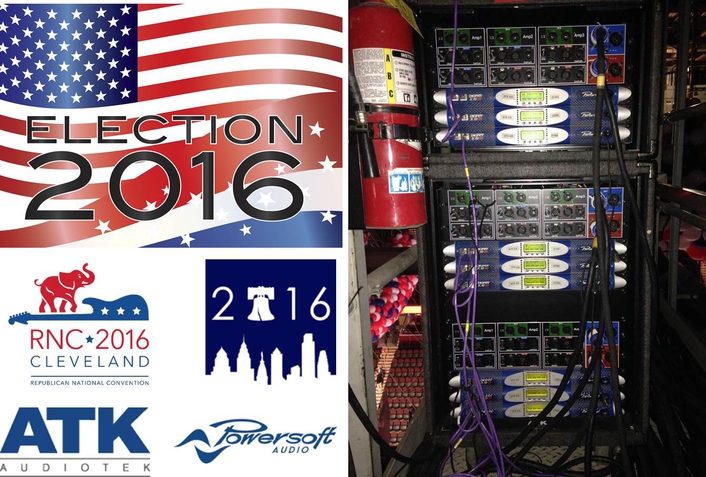 When the two National Conventions were held to select the Presidential candidates for the Republican and Democratic parties, Powersoft was on hand to electrify the events.
First of all 84 of Powersoft’s K10 amplifiers occupied prime position in Cleveland during a whirlwind four-day event which saw Donald Trump formally capture the Republican party presidential nomination.

A little more than a week later, and across the country in Philadelphia, Hillary Clinton accepted the Democratic party’s nomination to run for President and again Powersoft was on hand to amplify proceedings in front of 4,700 delegates, who cast their ballots at the Democratic National Convention. This time 104 K10’s were deployed.

These events marked the start of the U.S. general election, and for such historically and legally significant events, audio intelligibility was the paramount technical consideration.

With 2,472 delegates in attendance at the 2016 Republican National Convention, for ATK Audiotek, which has been handling convention audio for more than two decades, this meant choosing what they believe are the most reliable, efficient, high-performance amplifiers on the market today: Powersoft.

Pat Baltzell, sound designer and FOH engineer for ATK Audiotek, was responsible for the audio system for the event at the Quicken Loans Arena in Cleveland, and began the design process last December: "First and foremost, this was a speech-based event, so the design approach had to take into account that every single seat needed to clearly hear what was being communicated," he says. "Further, the venue is being used to maximum capacity, and there was a seated floor where the basketball court normally is."

To ensure reliable audio and maximum intelligibility, ATK chose to integrate the 84 Powersoft K10 amplifiers, which were used to power all primary speaker clusters, in this case JBL VerTec 4889s. The clusters in the primary system surrounded the stage, and ATK also placed 14 delay clusters in 200 level upper deck seating area.

The Powersoft K10 amplifiers were hoisted onto the catwalk of the arena, high above the audience. "The amp racks were motored up there one at a time, and this was great because they are all so light," Baltzell explains. Having the amplifiers on the catwalk enabled ATK to reduce cabling lengths to the clusters, and each of the amps was controlled remotely using Powersoft's Armonía Pro Audio Suite software. "The Powersoft amplifier racks required a small footprint on the catwalk, which was very advantageous because this was also used for lighting dimmer racks, balloon drops, confetti and other things,” he continued. There was a lot of activity up there that you would not normally have for something like a rock concert or a basketball game." 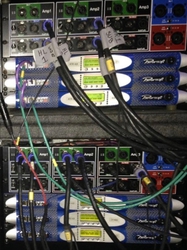 Before the amplifiers were sent up and placed into position, they were pre-programmed to cover the appropriate zones and wired for AES connectivity using CAT5 cabling. Once in place, Baltzell and his crew were able to maintain control over the units via Powersoft's Armonía software. "All the tuning and filtering were done in Powersoft's Armonía, and the software itself works great — especially considering the location of the racks, which were all the way up in the catwalk," Baltzell says. "So having full network control to be able to mute them at the end of the day, turn them on in the morning or even just check status was invaluable."

Since the K10s are so efficient, this also afforded Baltzell the opportunity to utilise smaller and lighter power isolation transformers — helping maintain an extremely low noise floor in the arena. "Since I was sharing power with video, lighting and other departments, I had to take responsibility for isolating the audio power," he explains. "Because the Powersoft amps are so lightweight and efficient, we brought isolation transformers in line with the power service to all our amplifiers, drastically reducing the overall weight load. In the past, using other manufacturers’ amps, we would need twice as many power transformers — which are very heavy and at the RNC we were up against a show weight load problem."

Finally, there was the ultimate concern of reliability — the system had to perform at extremely high quality and without interruption over a four-day period. "We haven't had reliability issues with Powersoft amplifiers, and that's an important reason why we chose them," Baltzell concludes. "I am very fond of the K10 series in particular because you never run out of power and they sound great. A PA system failure isn't even in the cards."

In a stellar follow-up to this event, over at the Wells Fargo Center in downtown Philadelphia, 104 Powersoft K10 amplifiers ensured that more than 180 speeches and 15 performances at the Democratic National Convention were heard by delegates with absolute clarity.

Once again, the underlying purpose over the four days was to select the Democratic Presidential and Vice Presidential nominees for the highest office in the land — and ATK Audiotek this time relied on this large deployment of Powersoft K10 amplifiers to deliver ultra-reliable, high quality audio.

While set in a completely different style arena 430 miles away, expectations were similar: the audio system had to deliver reliable, no-compromise speech intelligibility to every seat within the 19,500 capacity venue. ATK's Head System Tech Alex Guessard, System Tech Kirk Powell and Designer / FOH engineer Pat Baltzell were each on hand in Philadelphia, to ensure yet another successful outcome.

Pat Baltzell's design specification called for two amplifier barges located on either side of the main arena scoreboard, which were to drive the primary speaker clusters. "One of the biggest considerations we faced was placement of equipment," explains Powell. "For the amp barges, we were limited in the amount of weight we could put up there, and we had to ensure we could get sufficient power in there to drive the amps. All of these things factor into how Powersoft can really help us at a convention like this, since the racks are so light and power-efficient." 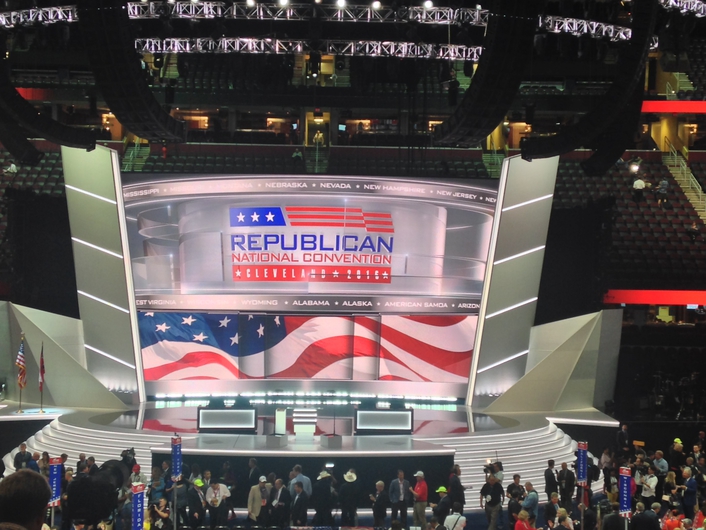 Similar to Cleveland, the Philadelphia stage was situated on the long side of the arena floor. Powell says that it was an extremely reflective acoustic environment, particularly with the temporary walls and boundaries set up by attending media to create isolated live broadcast setups. Not surprisingly, stringent security measures were in place, adding to the logistical challenge: "All the amplifiers had to go through security before they could go up in the air to the catwalk or into the amp barges — this added another level of complication to an event like this," observes Powell.

For the primary audio system, ATK specified six clusters of JBL VerTec 4889 loudspeaker arrays located around the stage and 12 time-delayed clusters for the arena's upper deck.  ATK's Alex Guessard configured and time aligned the system using Powersoft's Armonía Pro Audio Suite software, creating multi-zones for both the primary and secondary loudspeaker clusters on each level of the arena. "We had to create different delays based on the overall oval shape of the room," reports Powell. "The overall coverage was great and it performed exactly as we expected."

Once all the political dust has settled, and all the equipment was back in the trucks headed to ATK's headquarters in Valencia, Calif., Powell was able to finally reflect on the key ingredients that made two of the country's most high profile events in the country successful from a leading integrator's perspective: "You have to have a good group at the shop back home," he says, “and at ATK, it's truly a team effort. Also you've got to be able to lean on premier audio gear for these performances, and that's where Powersoft comes in."