Post Production of Oscar® Nominated Documentary, 'Hell and Back Again' with Sonnet

Four-Drive, 8TB RAID 5 Storage System Used to Store 100 Hours of Raw HD Footage in Editing Process
Sonnet Technologies announced that its Fusion™ D400QR5 four-drive RAID 5 SATA storage system played a key role in the post-production editing process for "Hell and Back Again", the Academy Award® nominated documentary describing the experience of a U.S. soldier wounded in Afghanistan. The feature-length film was directed by Danfung Dennis, a renowned photojournalist whose still photographs have been published in Newsweek, TIME, The New York Times, The Washington Post, and numerous other well-known newspapers and periodicals.

"With more than 100 hours of footage that had to be painstakingly edited into the final film, we needed a large amount of dependable, high-performance storage — and the Sonnet 8TB D400QR5 was ideal for the purpose," said Dennis. "As a medium-sized storage system, the D400QR5 fills an important gap between consumer drives and large-scale, enterprise solutions, offering all of the capacity and redundancy I needed as a filmmaker."

Already a winner of the World Cinema Grand Jury Award for Documentary and the World Cinema Cinematography Award at the 2011 Sundance Film Festival, "Hell and Back Again" reveals the devastating impact a Taliban machine-gun bullet has on the life of 25-year-old U.S. Army Sgt. Nathan Harris. The film seamlessly transitions from stunning war reportage to an intimate, visceral portrait of one man's personal struggle at home in North Carolina, where Harris confronts the physical and emotional difficulties of readjusting to civilian life with the love and support of his wife, Ashley.

For the editing task, Dennis converted his raw HD camera footage to Apple® ProRes 422 HQ files using the Compressor application on a 2.93-GHz MacBook® Pro. The files could then be stored in the Sonnet Fusion D400QR5 unit, which was configured with four 2TB drives and set at RAID 5 for an optimal combination of maximum performance and secure redundancy. When evaluating storage systems for the project, Dennis chose the D400QR5 for its ability to support up to four 2TB drives as well as its flexible and fast quad interface options for connecting to the MacBook Pro, which enabled him to work with files directly off the storage system using the Final Cut Pro® editing application. 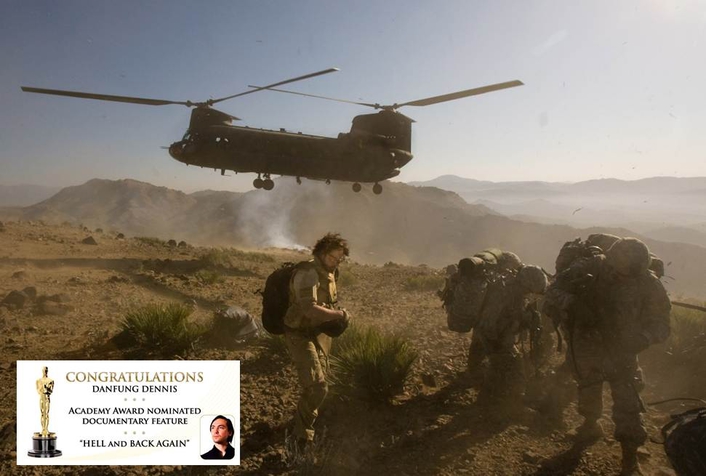 "'Hell and Back Again' is an important work because it reveals the true cost of war for soldiers and their families. Mr. Dennis' use of the D400QR5 demonstrates its versatility and portability of our RAID storage product," said Greg LaPorte, vice president of sales and marketing at Sonnet Technologies. "We're honored that the D400QR5 played such an important role in securing the valuable footage of this Oscar® nominated documentary through its post production."

About Danfung Dennis
In 2010, Danfung Dennis won the Bayeux-Calvados Award for War Correspondents, was named one of the 25 New Faces of Independent Film by Filmmaker Magazine, and one of the 30 New and Emerging Photographers by PDN Magazine. Danfung Dennis directed and filmed his first feature length documentary on the war in Afghanistan, "Hell And Back Again," which premiered at the 2011 Sundance Film Festival and won both the World Cinema Jury Award and the World Cinema Cinematography Award. He is the founder of the immersive video startup Condition ONE. His background is in Applied Economics and Business Management. Before working as a photojournalist and filmmaker, he consulted small and medium sized enterprises in Uganda and South Africa. 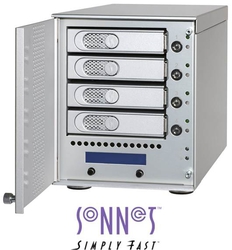 About Sonnet Technologies
Sonnet Technologies Inc. is a leader in providing storage systems, media readers, and Thunderbolt™ technology PCIe expansion products for professional users of Macintosh®, Windows®, and UNIX® systems in the film, video, and broadcast industries. The company's product line features a range of high-performance, cost-effective, and reliable desktop and rackmount RAID storage solutions ranging from two- and four-drive portable units, to eight- and 16-drive desktop attached storage with advanced RAID controllers, to 16-drive, 16-port, 8Gb Fibre Channel shared storage systems that are expandable to 384TB. Celebrating 25 years in business, Sonnet has pioneered and brought to market numerous innovative solutions that enhance the performance and connectivity of Macintosh, Windows, and other industry-standard computers.

GTC Heads into the War Zone

Hell And Back Again
Sonnet