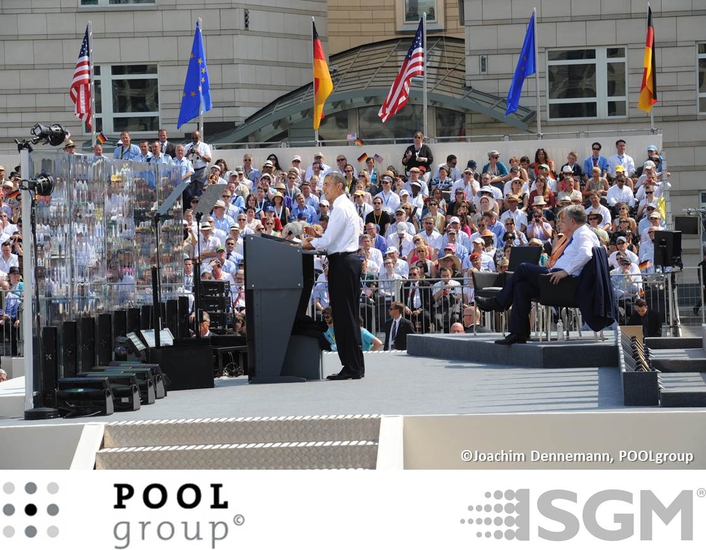 Huge lux levels achieved in the face of bright sunshine
Barack Obama recently visited Berlin for the first time since his election as US president. The highlight of his 25-hour stay in Berlin was his speech before an invited audience of 5,000 people at the Pariser Platz in front of the Brandenburg Gate.

The technical planning and equipment necessary to transmit his speech to the world media was undertaken by event production company, POOLgroup on behalf of the German Foreign Office and the Federal Press Office.

At first glance, it may seem absurd for an event taking place under a cloudless blue sky to require artificial outdoor lighting. But it was feared that such was the positioning of the stage on the Pariser Platz and the Brandenburg Gate, while intense sunlight would be expected on one side the other might be plunged into semi-darkness. 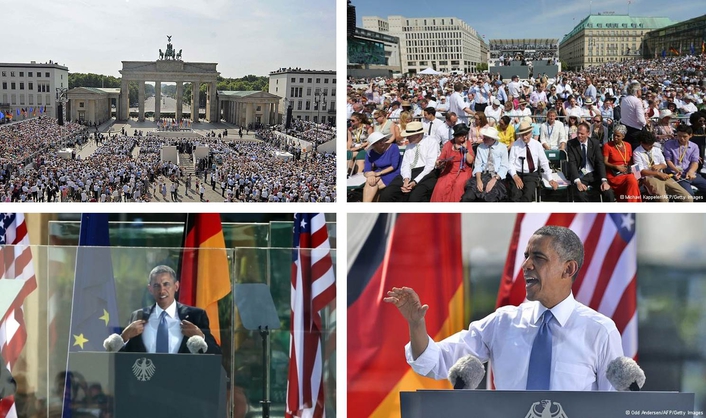 The production team also had to consider that a pure illumination from the front would have reflected from the centimeter-thick, bullet-proof armoured glass, placed in front of the lectern, to safeguard the President. Equally, any illumination from conventional angles would have triggered massive reflections on the glass and blinded both press and public.

The solution was to place a total of 17 x SGM P-5 RGBW washlights directly behind the glass on the floor as spotlight illumination of the lectern, working alongside the TV cameras. To compensate for the differences in brightness and create uniformity, six P-5 were placed right of the lectern, a further three floor-mounted at the bottom centre and eight fixtures on the left. This resulted in a powerful, balanced and controllable illumination from the front and both sides.

A remarkable, technical detail, was the lux values that this achieved. The incident light intensity from the sun was 120.000 lux. The levels achieved using the P-5 were: two sides of 40,000 lux (sunlight originally 9,000 and 37,000 lux) and 28,000 lux (sunlight originally 13,000 lux) from the front! In order to make the teleprompter easier to read, the the front light focused on President Obama was reduced to ‘only’ 22,000 lux! 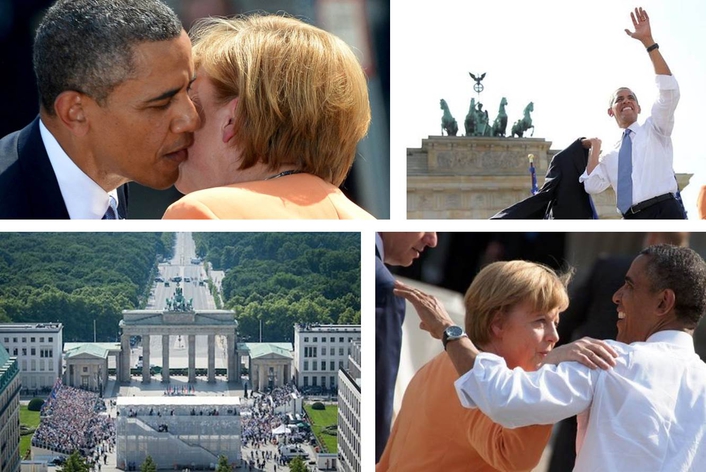 The POOLgroup had earlier invested in a considerable number of P-5 washlights, since they are flexible, very light and easy to control.