The CEDAR DNS 8 Live: Suppressing noise and feedback at large events
Neumann & Müller is one of the largest event service providers in Europe. The company already owns three DNS 8 Lives and uses them at all its larger events, one of which was the recent conference of the German Social Democratic Party, which was held in the Leipzig Messe on 14 - 16 November.

In their post-conference report, Phoenix (the company that recorded the convention for public broadcast) mentioned on numerous occasions the "excellent acoustic" in the hall. They said that, despite the babble and hubbub generated by 2,000 attendees, the noise control was excellent. They also stated that the working conditions were optimal and that the strain of the job was minimised - something that is almost unheard of at events of this size.

The Executive Producer from Neumann & Müller, who was responsible for sound reinforcement at the conference, described the location as a typical exhibition hall - highly reverberant with many flutter echoes. He said, "The DNS 8 Live was a great help. As well as for broadcast, we placed it in the monitoring chain to gain more headroom and, even when using the hall microphones, we didn't have to employ EQs so much to control the sound. At this point, the eight channels of the DNS 8 Live were extremely handy."

"The DNS 8 Live has also proved itself in situations such as interviews and talk shows in reverberant spaces. For example, more than ten headsets were active directly under the loudspeakers during the US election programme last year, but the DNS made it possible to amplify our PA level well over the extremely loud, pub-like atmosphere in the hall." 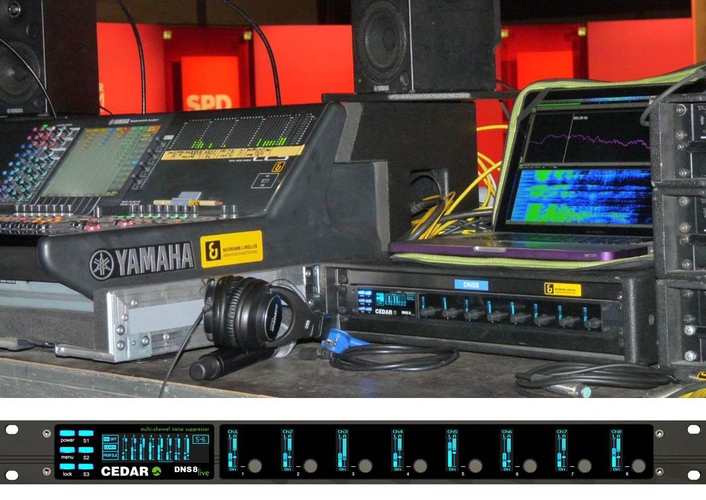 About the DNS 8 Live
The DNS 8 Live dialogue noise suppressor was designed specifically for live sound and broadcast. It offers eight independent channels of noise suppression using a new algorithm that makes it the most flexible DNS ever built. It offers a standard 4-pin 12VDC input, and a web-based remote control interface for laptops, iPads and other devices.