As Much As You Need 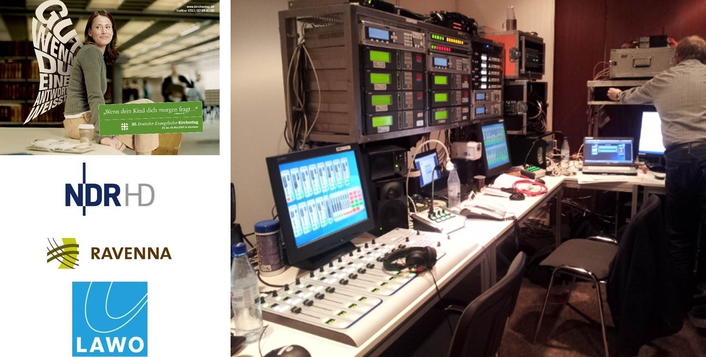 RAVENNA audio networking and Lawo at work at the Church Convention (“Kirchentag”) in Hamburg
More than 2,500 individual events comprised the 34th “Evangelischer Kirchentag” (Protestant church convention) that took place from May 1st to May 5th in Hamburg. The closing service attracted around 130,000 faithful, as well as considerable interest from the media.

The Kirchentag’s biblical motto – ‘As Much as You Need’ – could well have been applied to the technical infrastructure that was set up in the press center serving the event. Reporters from around 40 radio stations were present, and all needed access the events feeds at all times. On the technical side, Lawo played a significant part in providing the infrastructure and ensuring that everything ran smoothly.

The 400m² press center, with the set-up managed by local public broadcaster NDR (North German broadcaster), provided the various ARD stations (Germany’s public broadcasters) with separate cubicles for their editorial staff. In addition to these workplaces, there were two self-op studios, three studios with sound engineers and one central control room. Outside, in front of the building, several radio stations had also positioned OB trucks that needed access to the audio feeds.

The OB vehicles were linked via fiber-optic cables that were configured as three Virtual LANs (VLANs). The first connected the OB vans with the internal ARD network, the second established a general Internet connection, and the third was used for RAVENNA streams to feed audio to the OB vans. To be on the safe side, QoS (Quality of Service) was assigned to the network to guarantee sufficient bandwidth – but, as it turned out, the network requirements were sufficiently low that there were no problems.

The journalists in the OB vans also had their own monitor boxes, an Axia xNode that could receive eight channels and connect to the RAVENNA stream, and a Lawo KS-16 connected via Ethernet to select the required audio signals. The KS-16 controlled a Lawo crystal console in the master control room, which then supplied a selection of eight channels via the RAVENNA network.

Part of the appeal of using RAVENNA was that it is a non-proprietary technology based on Ethernet: “Because of the Layer-3 technology, we were able to use existing network structures. We wouldn’t have gained anything by laboriously installing new cabling – the use of the existing structure meant that we were able to reduce the effort significantly,” explains Sascha Schwoll, responsible for outside broadcast at German public broadcaster SWR and part of the ARD-team that planned and implemented the technical setup at the “Kirchentag”. 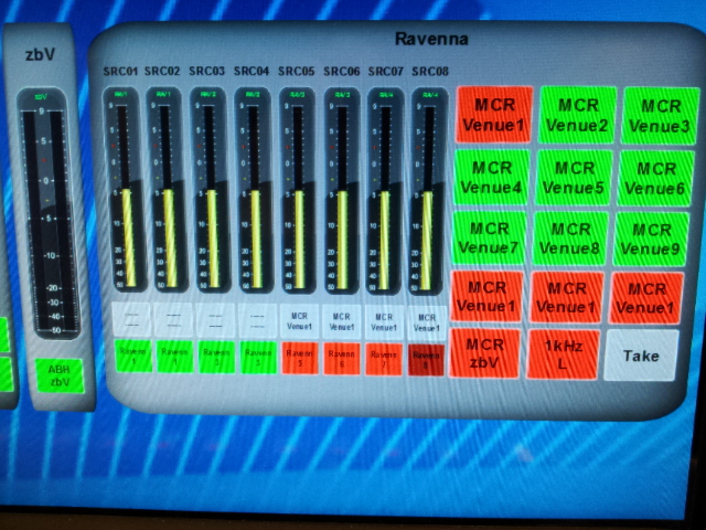 Prominent interview partners
Broadcasters at the event were able to book time slots in the two self-op studios, for example to record interviews and send them to their stations via file transfer, or to conduct a live interview. There were several prominent interview partners in Hamburg that were provided with headsets by the sound engineers or editorial staff in the self-op studios, and then connected e.g. with the broadcaster WDR in Cologne/Germany. The WDR then would either broadcast the interview live, or record it for later transmission.

In their workplaces, journalists also had small monitor speakers and a Lawo KS-16 module allowing to select the audio signal they required. To make this audio setup manageable, the editorial workplaces were combined in groups of five-to-six cubicles, which were each fed audio from a crystal base unit. These base units received their signals from the Nova29 router installed in the master control room.

Outlook
In the future, RAVENNA could be the right solution for handling this kind of tasks even more efficiently: “It is planned that the editorial journalists simply select the RAVENNA streams they need to listen to on their laptops. And besides supplying individual journalists with audio streams, I’m thinking about setting up an ARD-wide multicast that, in the future, would contribute the signals across all connected stations,” continues Schwoll.

The next installation will be at the Frankfurt Book Fair (“Buchmesse”), in October, where Lawo sapphire consoles will be used – and with their motor faders and touch screens providing further benefits. Also, laptops will be networked via RAVENNA streams. This was one of the reasons for the use of Lawo solutions. “Because Lawo is so widely used at all the big events, it makes a lot of sense for us to work with them also on smaller radio broadcast events. The only difference is that the number of available channels is not of highest priority. Much more important to us in this context is to be able to use existing network structures with RAVENNA,” Sascha Schwoll closes.