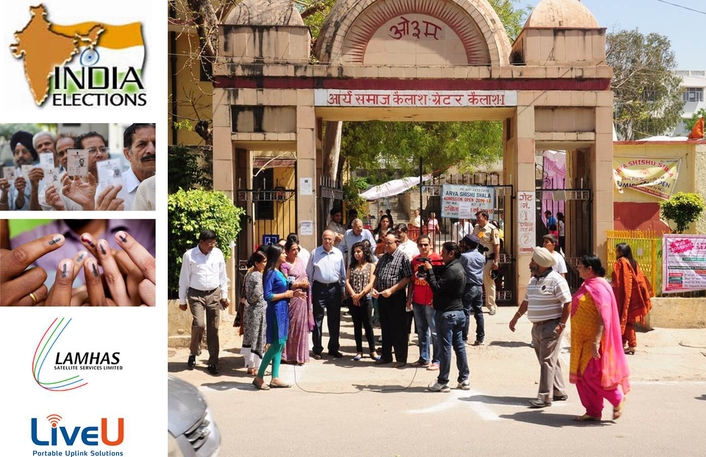 Broadcasters deployed hundreds of LiveU’s units around India for 24/7 coverage of campaign trail
LiveU a leader in portable live video acquisition, contribution and management solutions, has announced that hundreds of LiveU units have been deployed by India’s top broadcasters and online media to boost their live reporting of the Indian General Elections, said to be the world's biggest elections.

To meet the demands of the campaign trail, increased numbers of LiveU units have been provided to customers around India on a long-term and short-term basis. Onsite service and support is being provided nationwide by Lamhas Satellite Services Ltd., LiveU’s local partner in India.

Piyush Gupta, Operations Director and CTO - Broadcast, Network 18, said, “We needed to increase our coverage capabilities during the Elections. LiveU, our preferred vendor since the emergence of cellular bonding, responded immediately with the fast delivery of equipment. Supported by the local Lamhas team, we’ve been able to transmit live coverage of the campaign around the country with ad hoc interviews and press conferences. Both LiveU and Lamhas have proved to be trusted partners at this critical time.”

Rajat Nigam, Sr. VP & Head Technology, Times TV Network, said, “The General Elections in India were a massive event challenging every aspect of news channel infrastructure. Being the leader in the news genre, we were expected to put out programming with a high benchmark standard targeting viewers across the length and breadth of the vast country. Newsgathering, which has become the core to any news channel, was a focus area and herein LiveU units proved to be of great value. It allowed faster movement between locations, quick deployment time and flexibility to provide live feeds at varied Telco strength locations. We were clearly ahead of other channels because of the effective and efficient field units."

An important part of the deployment has been LiveU’s new smaller, stronger LU500 uplink unit offering optimal video performance and reliability in a lightweight unit, weighing less than 1 kg (2.2 lbs). The LTE-ready LU500 is compatible with Indian networks.

Ajay Jain, CEO of Lamhas, LiveU’s partner in India, said “LiveU, which has captured over 80 percent of the Indian market, is synonymous with cellular uplink. The elections have increased LiveU deployment even further and we’re proud to be facilitating increased news coverage together at this important time in India’s history. With operators starting to roll-out LTE networks around India, LiveU’s LU500 is gathering traction across our extensive customer-base.”

Samuel Wasserman, LiveU’s CEO, said, “Following the ongoing success of LU70 in recent years covering major events in India, we’re proud that India is one of the first countries to adopt the LU500 backpack. Combining mobility and flexibility together with the highest video performance, LU500 has proven to offer an ideal tool for live newsgathering across a vast, diverse territory. The elections are a great example of LiveU technology in action on a large scale.”

About LiveU
LiveU is a leader in portable live video acquisition, contribution and management solutions. LiveU's award-winning technology enables live video transmission (HD and SD) from any location around the world.  With top-tier customers in 60+ countries, LiveU’s solutions are being used for breaking news and high-profile events, such as the Sochi Winter Olympics, FIFA World Cup™, US Presidential Campaign, London 2012 Olympics, Royal Baby, Hurricane Sandy, Super Bowl and US Collegiate Championships. From backpacks to smartphones, LiveU offers a complete range of devices for live video coverage. LiveU’s solutions include multiple 4G LTE/3G, HSPA+, WiMAX and Wi-Fi cellular links, which are optimized for maximum video quality based on the available network conditions.