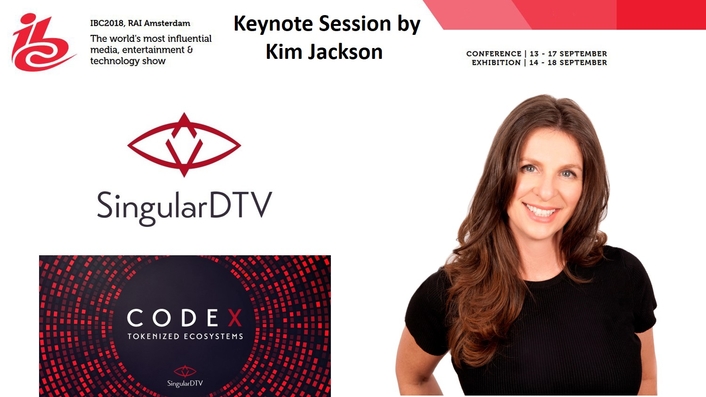 Film producer, Co-Founder and President of Entertainment of SingularDTV, a blockchain entertainment studio, Kim Jackson, will take to the stage to deliver the Convention Keynote ‘Blockchain: Empowering Content Creators’ on the morning of Friday 14 September.

“In the two years since we founded SingularDTV, I’ve seen blockchain skyrocket into the public consciousness,” said Kim Jackson. “We are one of the first companies to bring transparency to the entertainment industry and I am very honoured that IBC asked me to share our vision with its impressive roster of high-profile global participants. Having a head start on most other blockchain companies means we are building on our experiences of actually putting that vision into practice.”

Open to all IBC2018 attendees, this free-to-attend session will explore the impact blockchain technology is having on the media and entertainment industry by bringing transparency to the way we create, manage and/or distribute entertainment content in the future. Jackson will address how blockchain can be used to manage rights/revenue automatically using smart contracts, and explore the tools and systems required to support creatives in this emerging, dynamic and empowering ecosystem. Jackson will be joined on stage by the Amsterdam-based director/producer of the sci-fi comedy Space Beers to discuss how he launched a campaign using Tokit, one of SingularDTV’s blockchain apps.

Jackson’s impressive career has seen her work with Universal Pictures for Steven Spielberg on Munich, and on Spike Lee’s Inside Man before she founded Streetwise Pictures. Her critically acclaimed production, Blue Caprice, premiered at Sundance and was the opening night film at New Directors/New Films at MoMA. She received a Spirit Award nomination for producing the film. Jackson co-founded SingularDTV in 2016. She produced Alex Winter’s feature-length documentary Trust Machine: The Story of Blockchain, which has a US theatrical release this fall. She just finished shooting The Happy Worker by Duwayne Dunham, executive-produced by David Lynch, starring Josh Whitehouse, Thomas Haden Church, Colm Meaney and Meagan Holder.

Jaisica Lapsiwala, IBC Head of Content, said: “IBC2018 is the event to hear innovative, new and challenging ideas from top industry leaders across the media, entertainment and technology industry. We’ve made it our mission to seek out and showcase rare talent, which is why we’re thrilled Kim Jackson - a trailblazer in the use of blockchain in the entertainment industry, is our highly coveted Convention Keynote. We look forward to hearing from Kim and Maurice about the impact blockchain and cryptocurrencies on the media and entertainment industry and the far-reaching repercussions this has on how producers create and distribute content.”

About IBC
IBC is the world’s most influential media, entertainment and technology show, attracting 57,000+ attendees from more than 170 countries and combining a highly respected and peer-reviewed conference with an exhibition that showcases 1,700+ leading industry suppliers of state-of-the-art technology. In addition to the world-class exhibition and conference, IBC also encompasses the IBC Daily, IBCTV and IBC365.
IBC365 provides year-round insight and opinion into the hot topics and key trends from leading industry journalists, along with insightful whitepapers, peer reviewed technical papers, highly engaging webinars and an expansive video library.