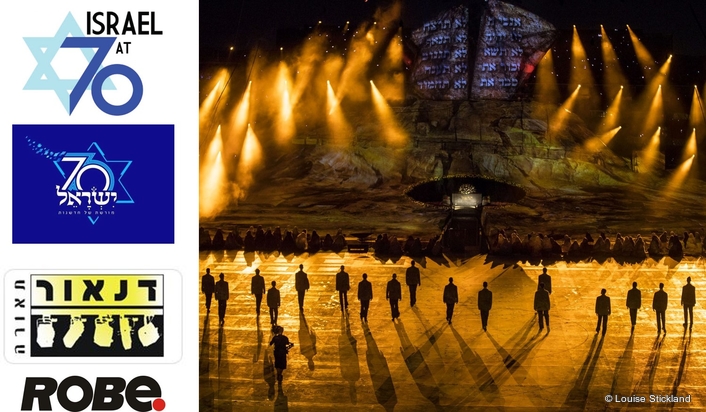 Ronen Najar is a lighting designer used to working under some pressure, and for the 2018 Israeli Independence Day (Yom Ha'atzmaut) Opening Ceremony on Mount Herzl, Jerusalem, he needed those steely nerves as part of the creative team helping to commemorate a historically significant moment in Israel’s history, … the 70th anniversary of the 1948 Declaration of Independence.

Ronen chose to use 55 x Robe MegaPointes and 68 x BMFLs - a combination of Spots and WashBeams - to illuminate the vast performance area built around the tomb of Theador Herzl, founder of modern political Zionism, at the top of the Mount of Remembrance, the site of Israel’s national cemetery and a resting place for the country’s war dead.

It’s also attended by an invited audience of 7,500 who this year saw a cast of 1500 perform a specially devised show directed by Ran Zahor. This was a mixture of official ceremonial elements – including the lighting of 12 torches to represent the 12 tribes of Israel and an address by Yuli-Yoel Edelstein, Speaker of the Knesset – inter-spliced with a high energy entertainment spectacle.

“It is always a great honour to work on this show” were Ronen’s first comments on the event, which he has lit for the last 10 years. This year, additional budget was made available in view of the 70 year landmark which was ploughed into creating a landmark show. 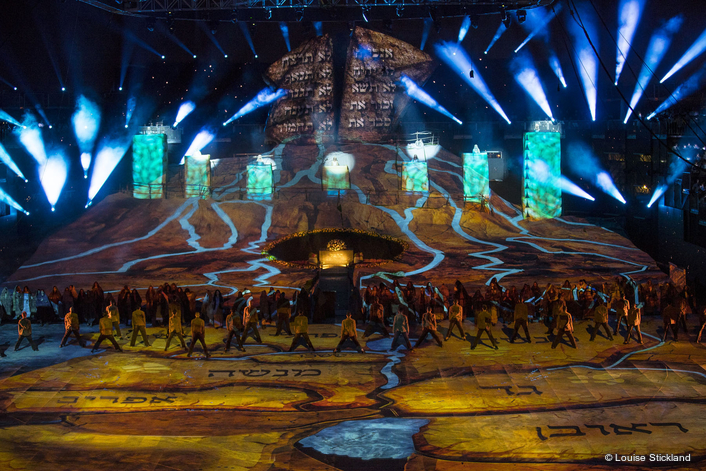 The set design by Nitzan Refaely was the first visual element to be finalised. This year it comprised a large structure incorporating the tomb in the centre towards the front. Behind this a slope with a walkway was created and covered in projection screen material, brought alive by images from 15 x 25K Epson laser projectors.

The rear of the structure was rigged with multiple LED screens, and there were also projections across the massive field-of-play area.

Ronen designed his lighting rig and chose fixtures taking on-board all these parameters together with what was needed to achieve his imaginative goals and communicate the emotion of the occasion to the audiences.

A fine balance between precision and high-impact effects was required to enhance the range of atmospheres needed and the sheer dynamics of the two hour show.

Very bright sources were the only option, both for the throw distances and to hold their own against the high levels of LED at the back.

He also needed a fixture that could be shuttered – hence the BMFL WashBeams – for moments like the torch ceremony, speeches, the flag transfer and the military bands section. All of this was juxtaposed with a programme of banging and jubilant dance ‘production’ numbers full of bouncing cast members, mobile props and punctuated with strategic fireworks and pyro cues. 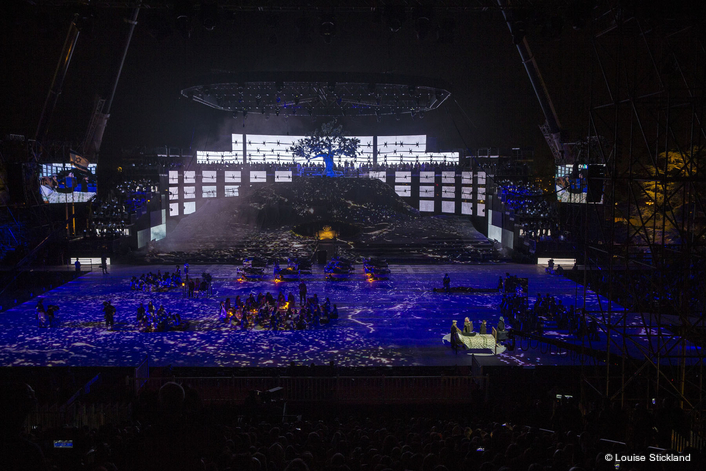 The shutters were also essential in ensuring that lighting didn’t interfere with any of the projections.

A 25 x 40 metre box truss was flown above the centre of the performance space, suspended on sky hooks from two giant cranes supplied by Yehuda’s Cranes. Their elegant masts were extended to 50 metres (from a total potential reach of 70 metres) and the load - heavy duty trussing, lighting fixtures and LED video border - was picked up on 12 points and trimmed at 18 metres above the show floor.

Flying this part of the rig from the cranes was an inspired piece of rigging engineering that ensured fantastic, clean sight lines.

In addition to these, two large scaffolding gantries were built at the front of the field-of-play adding more lighting and audio positions and the backs of the three seating tribunes were also utilized.

The MegaPointes were all positioned on the stage set and used for high impact back lighting and high clarity gobo projections skimming the floor and stunning aerial effects blasting up into the night sky.

The BMFL Spots and BMFL WashBeams were deployed across all the other lighting positions and were used for multiple tasks, from key lighting for the speeches and torch-bearers, the military parade sections of the show, to washing the performance area with rich colours, some secondary gobo projections and for specials and highlighting specific sections throughout the performance.

“They were the perfect powerful multi-purpose fixture for the occasion,” stated Ronen, who is well known for his fresh and innovative visual approach 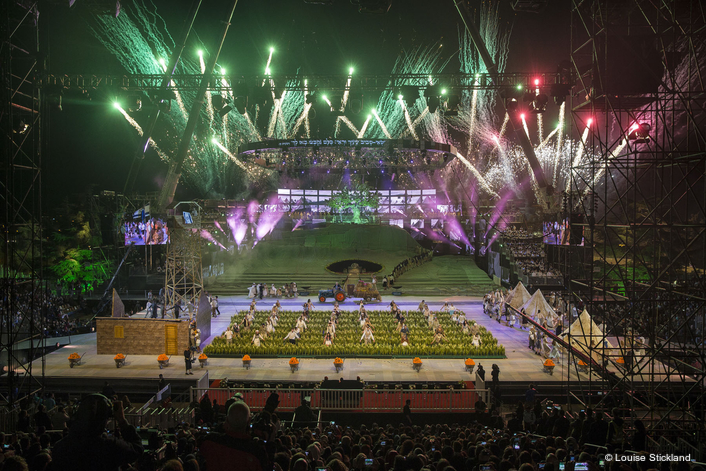 The show and the 13-camera telecast benefitted from Ronen’s television experience and needed a skilful combination of several lighting disciplines which he delivered with thought and effect.

It was the first time Ronen had utilised MegaPointes on one of his shows … as they have just recently arrived in Israel. These and the rest of the lighting plus the audio system were supplied by the Simul Argaman Group.

“The MegaPointe is amazing!” declared Ronen, “I love the intensity, the colours are incredible, the focus is excellent and the gobos crisp and clear.” While he didn’t employ a vast number of fast movement chases on this event, he commented that the speed of this function also impressed him.

They flawlessly created the myriad of big beam and aerial effects he wanted. “They are very dramatic! In the past to create this amount of drama onstage and in the air on a show like this … you’d have to use xenons!”

Robe’s Israeli distributor Danor Theatre and Studio Systems was instrumental in ensuring that enough MegaPointes were made available in time for this premium event … as it is one of the most in-demand luminaires worldwide. Danor’s Erez Hadar commented, “We are very pleased that MegaPointes were spec’d by Ronen for this show … it is great to have as a reference and it is thanks to the whole team at Robe for helping us make this happen”. 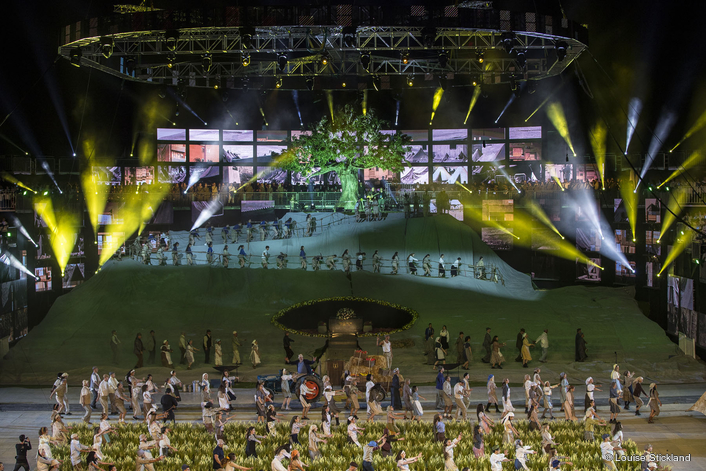 BMFLs have been a favourite for the last four years, since he first used them, and it was the second time – after last years’ Maccabiah Games OC - he has used the WashBeam version on a major show. “They are the brightest fixture on the market, the colour temperature and CRI is spot-on for TV, the shutters are essential and they are simply a great luminaire for environments where you need the punch and flexibility”. 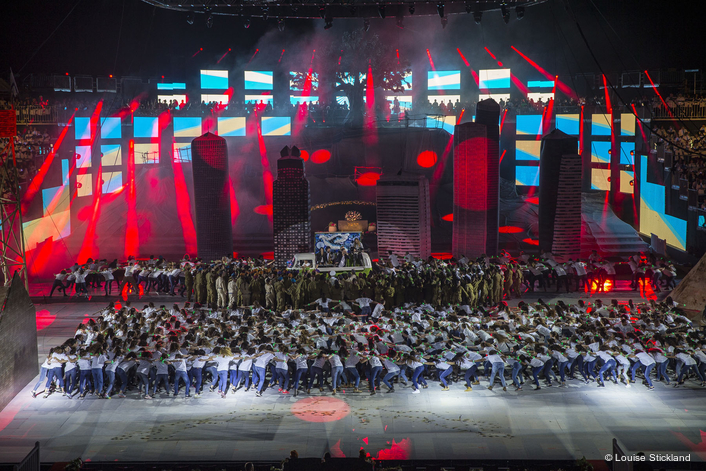 Ronen has designed many lightshows for large ceremonies and the challenge is always time. On this one, they lost three nights of programing time due to rain, so everything was compressed into three all-night sessions, which is not a lot for a show of this scale and complexity.

The many magic visual moments included a flotilla of 300 remote controlled pixel-drones – “shooting stars”, a system being developed by Intel – which performed a choreographed sequence forming shapes and symbols in the sky, like a constellation of twinkling stars zipping about.

Ronen worked intensely with two assistant LDs, Jonathan Frixo and Matti Murray and they used a grandMA2 platform, Ronen’s choice as the most flexible and stable control solution. 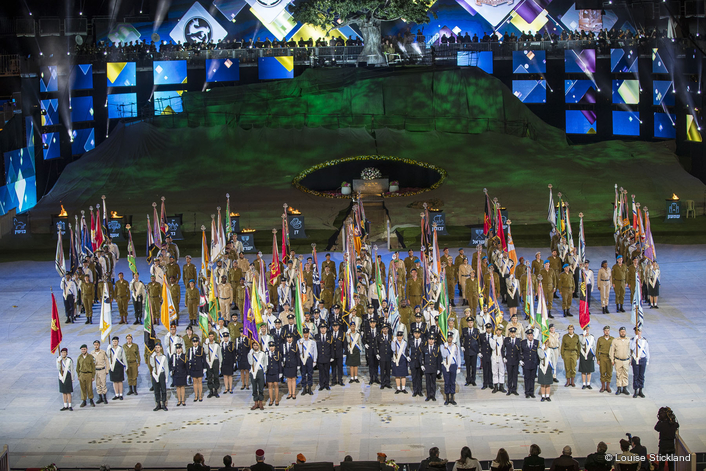 In addition to the Robes, he used some other moving lights and a selection of carefully positioned generics.

The event’s camera director was Amir Ukrainitz and the playback video content was produced by Shay Bonder. Video and projection was supplied by ScreenLight and AVS respectively, the stage set was built by Bimot 88 and the rigging contractors were Gader Vagan.

It’s a very emotional time in Israel. Independence Day is preceded by Memorial Day a time set aside for reflection and remembrance of all those who have died serving their country in the armed forces. Memorial Day starts at sunset the day before, and morphs into the celebratory vibes of Independence Day at the same time 24 hours later. 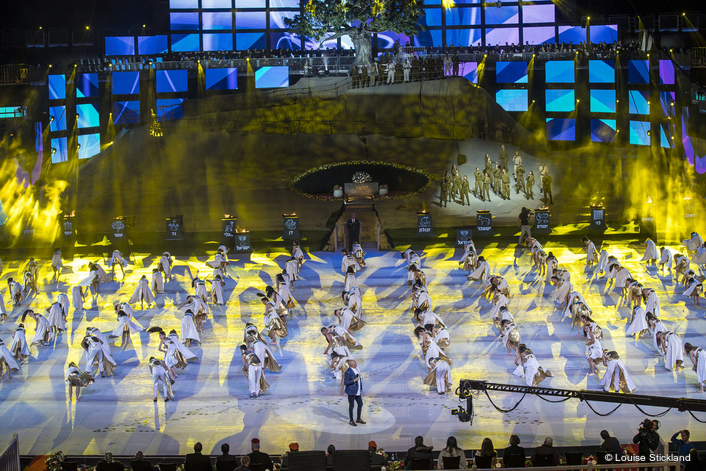 The Independence Day Opening Ceremony on Mount Herzl leads this transition, starting at 8 p.m., and as this show closes, parties start up all over the country. Every city, town, village and community goes into celebration mode, most continuing through the night and well into the next day which is a public holiday!