The July Fourth spectacular was produced by Capital Concerts for broadcasting live on PBS and NPR member stations worldwide, as well as on the American Forces Network. Riedel's Artist digital matrix intercom, Acrobat digital partyline, and new iOS virtual keypanel app supported the production team and talent for both the stage show and the live television broadcast.

"Each year the show gets a little more complex, yet the communication solution has remained the same. This year we were able to work with the event producers and take a giant leap forward with the technology we provided to the show," said Bill Saltzer, owner of East Shore Sound. "We chose to deploy an all-digital Riedel solution because it has a proven track record in the industry and allows for a great degree of flexibility, with user-friendly keypanels and beltpacks that can keep up with the ever-expanding needs of the event."

For more than a decade, communications solutions provider East Shore Sound has supplied equipment and personnel to "A Capitol Fourth," which each year features performances including the National Symphony Orchestra's rendition of Tchaikovsky's "1812 Overture" with accompanying fireworks and live cannon blasts. More than half a million people gathered on the National Mall for this year's concert, and millions more watched on television. Broadcast live from the West Lawn of the U.S. Capitol, the extravaganza relied upon a production crew of more than 400 and took advantage of 20 cameras positioned around the city.

To support this year's concert, East Shore Sound employed an all-digital Riedel solution in place of the event's traditional two-wire analog system. The company deployed a Riedel Artist 128 frame on the stage to handle the analog interface to the existing intercom system in the on-site mobile production truck. This frame also provided a four-wire interface to seven wireless intercom systems and two wireless IFB transmitters, distribution to Riedel C3 beltpacks via two CU44 Plus Digital Partyline systems, and connection to nine keypanels used around the stage.

A smaller Artist 64 frame located at the front-of-house position distributed signals to another 12 beltpacks via partyline systems and several additional keypanels, and an additional partyline system was positioned at the Grant Memorial across the street and behind the main stage to provide communication during a performance by the U.S. Army Band. To address a last-minute need for communications with the remote camera operator at the Lincoln Memorial, East Shore Sound used a Riedel RiFace universal radio interface to establish reliable connectivity to the operator's traditional 4-watt portable radio. 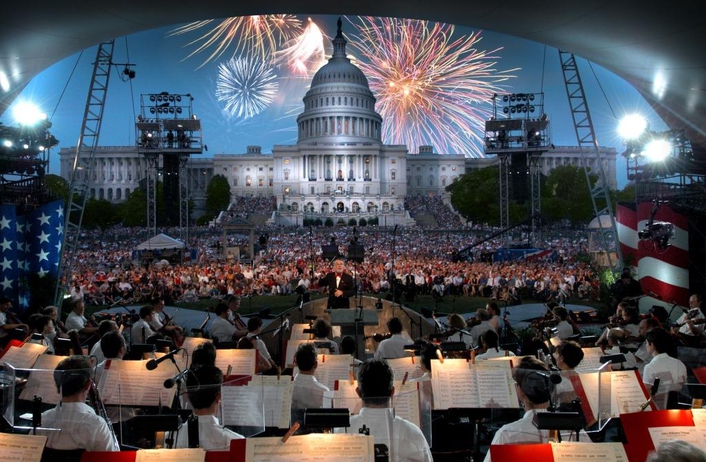 "The audio quality on the virtual keypanel was superb and the ability to work wire-free was fantastic," added Saltzer. "As a complement to existing types of wireless communication, Riedel's new iOS app is a great addition to our toolbox."

About East Shore Sound
East Shore Sound is a live event communications and RF services company located in Baltimore, Maryland. The company provides solutions to a host of clients for television broadcasts, live events, and corporate events throughout the United States.

Broadcast and Comms for E...ean Elections with Riedel
It’s a first
20 Years after the Fall o...all with Riedel MediorNet