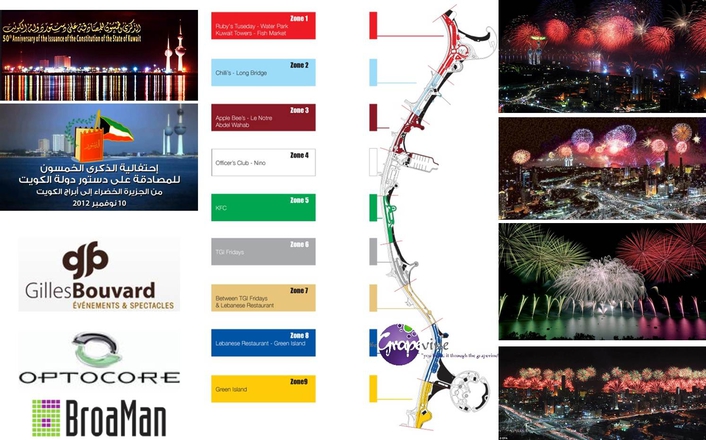 .
An advanced BroaMan fibre network joined forces with sister company Optocore, to play a key role in Kuwait’s 50th Constitution Day celebration which took place recently along nearly 5km of beach in the heart of Kuwait City. The final act of the show lasted almost an hour, with a total of 77,282 fireworks, which broke the Guinness World Record for the largest fireworks display ever.

French-based rental company, Gilles Bouvard Events and Entertainment (GB4D) was contracted by the Kuwaiti government to deliver video transport (as well as audio and lighting management for one of the largest shows ever staged in the Middle East (and GB4D’s largest project ever). The main challenge they faced was the coverage distance along the beach and the associated problems posed by a sand and water environment.

Since production had stipulated that sound and light needed to be delivered to any point along the beach, and out at sea, two Optocore ring systems were accompanied by a BroaMan solution that would provide video transport to the multiple screens – with two independent SDI channels transported along the beach. With 30 years’ experience in the sound and lighting business, Gilles Bouvard found that BroaMan offered a perfect video and data distribution system for his project — with a ring topology that would distribute two channels to all remote locations.

The video signal was distributed over the BroaMan fibre transport platform via 14 new Route33 units. Each BroaMan unit was equipped with an HD-SDI input and HD-SDI output, four LAN ports, RS485/422 and two duplex COM fibre ports. All the devices were connected by fibre formulating a ring topology (similar to the Optocore system). The Control Room was equipped with two Route33 units, providing two video inputs to the network; all other units, distributed to the multiple remote locations on the beach, received both signals and it was possible to choosewhich signal should be routed to the HD-SDI output. As a result two different feeds were routed to the desired locations specified by the show producer, with the systemprovided routing control from one central location. 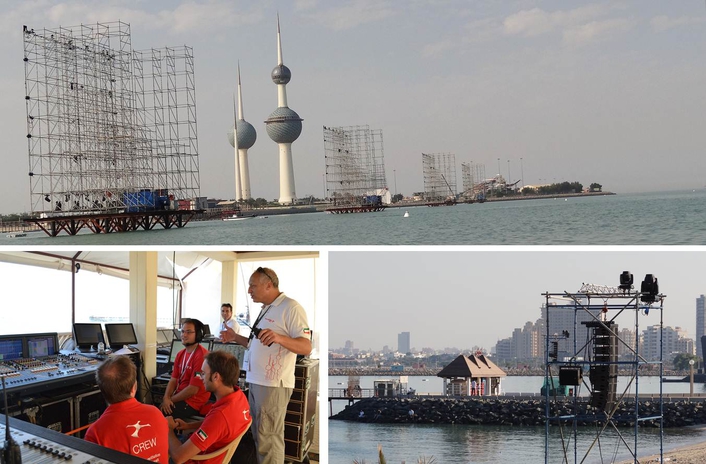 To ensure the best quality of the show, PRG — who provided video playback — installed IP cameras on each of the three locations with the sail-shaped screens, so the video engineer had a live-time preview of the distant screen in the Control Room. LAN for the IP cameras was also carried by BroaMan devices, each unit equipped with an Optocore frame, where all ports in the system combine to create one big 100Mbit virtual switch.

By purchasing only a 4-core fibre to run between each location, he saved not only the cost of copper cabling, but also assured the best quality of sound, control and video.

Thus the BroaMan and Optocore rings were able to share the same cable infrastructure, and although the systems worked independently, the cabling cost was highly reduced.

Speaking of his network design, Gilles Bouvard said, “I like technological challenges and the BroaMan / Optocore combination offered an elegant solution for network management of audio, data, light, video and remote control of amplifiers. We were also cost efficient, packing the whole system in just four fibre strands between locations.

Summing up, he said, “With no network there is no show — without control and signal, nothing happens. The result was stunning and everyone deserves congratulations — particularly Maciek [Janiszewski, BroaMan support engineer] for his assistance with the BroaMan configuration. It was great to know that when a light designer pressed a button nearly 5km away the projector would turn on without latency.

“In fact the client representing the government of Kuwait and Minister of Communication congratulated us at the end for the quality of the show.”