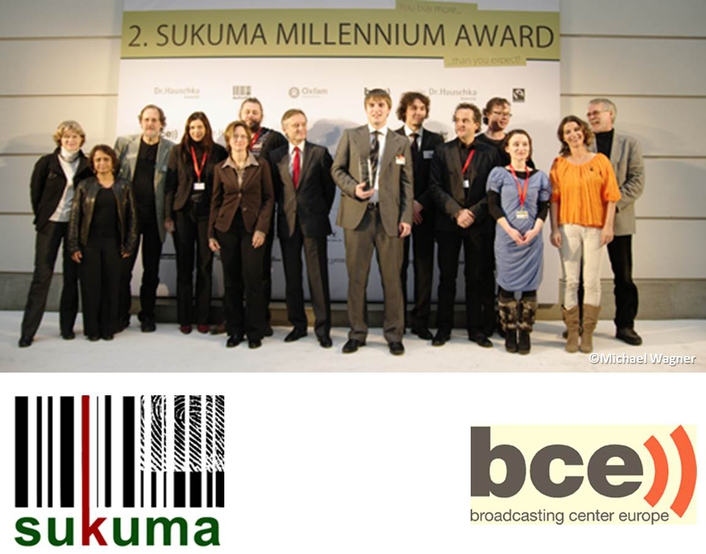 The Sukuma Award is under the patronage of the German Federal Minister for Economic Cooperation and Development
BCE has a 30 years experience in video production and postproduction, creating adverts and films for many well known companies and institutions in Luxembourg and the rest of Europe. Following its involvement in the production of the first Sukuma Millenium Award in 2007, BCE continued its sponsorship and took part in the creation of this second commercial.

Since 2007, Sukuma has been campaigning for the United Nations Millennium Development Goals, such as cutting in half worldwide poverty. Sukuma wants to inform people and show what they can do in every day life to achieve those goals.

The international jury elected the 29-year-old Michal Wilczek from Poland winner of the 2nd Sukuma Millennium Award with his touching idea for a commercial about the exploitation of textile workers. Together with Michal, who submitted his idea on an A4-sheet of paper, BCE provided the Sukuma team with production means for the shooting in Dharavi, one of the largest slums in the world, located in the suburbs of Mumbai in India. BCE did the additional shooting in Luxembourg and the final editing of the commercial, including the special effects.

The soundtrack was provided by MOBY (USA), a famous music artist who also produced soundtracks for successful movies like “The Beach” (with Leonardo DiCaprio). The Sukuma Award is under the patronage of the German Federal Minister for Economic Cooperation and Development, Heidemarie Wieczorek-Zeul. It was given personally to Michal Wilczek by the Vice-President of the German Bundestag, Katrin Göring-Eckardt, and by the director Anno Saul, in the presence of the Polish Ambassador, representatives of Berlinale and other prominent supporters.

Sukuma arts e.V. has been campaigning for the United Nations Millennium Development Goals. In order to find new and creative solutions and get through to a great number of people, Sukuma launched the European film award “Sukuma Millennium Award”, where everyone can participate with his or her idea for a commercial, dealing with the topic of the development goals, and realize it together with prominent artists. Furthermore, Sukuma develops innovative solutions for Education for Sustainable Development in Germany. Currently, it develops a Web2.0 learning platform up to the latest stage of development that will be used in schools.What does the name “Sukuma” mean?“Sukuma” emerges from Swahili, a lingua franca of East Africa, and means “to rise”, “to resist” or “to incite”. Many people in Africa are directly affected by the circumstances that became subject of discussions in the European public, because of the “Sukuma Millennium Award”.

BCE is a European leader in technical services in the areas of television, radio, production and postproduction, telecommunication, and IT. With its long experience on the media market, the BCE team provides high-quality services and finds the right solution to match any project and budget. With more than 200 high qualified and motivated employees, BCE serves about 400 clients in various sectors, such as TV channels, radio stations, film distributors, producers, advertising companies, telecommunications operators, and public services.