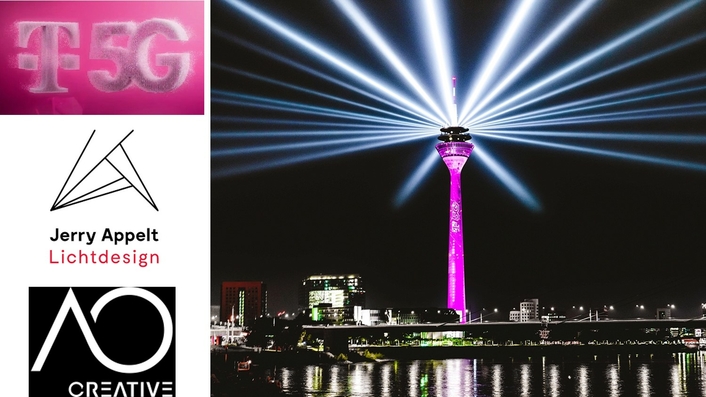 Düsseldorf’s 240m-tall Rheinturm tower was the setting for a sky-high laser projection and light show in June to promote Deutsche Telekom’s extended 5G network. The telecommunications company worked with German event management agency DO IT! to realise the show, and they in turn commissioned AO Creative to help conceptualise, design, supply the fixtures and technology, and execute the display.

Overseen by AO Creative’s Marco Niedermeier in collaboration with JALD Jerry Appelt Licht Design and Beacon, the project brought together AO’s team of design and technical specialists based in Germany. The team included lighting designer Jerry Appelt, who created a detailed scheme to light the concrete Rheinturm in a beautiful wash of magenta – Deutsche Telekom’s brand colour. Alongside, Laserfabrik facilitated laser-projected branding on the ‘trunk’ of the tower. 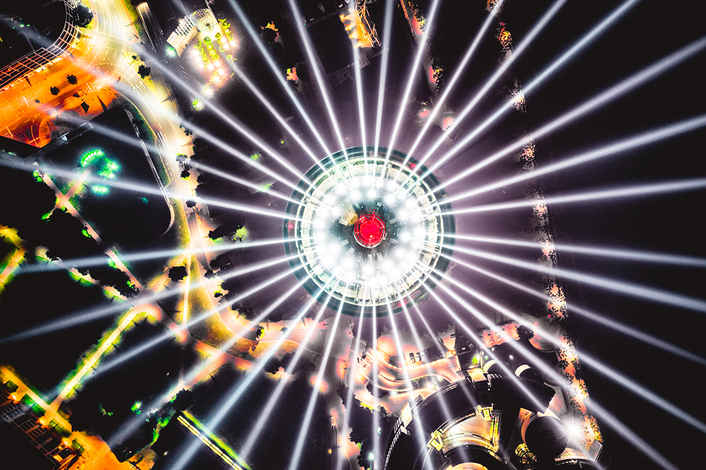 Atop the circular crown of the building, AO’s high-performance FALCON searchlights were positioned in concentric rings to spread bright, controlled beams of white light out across Düsseldorf, symbolising the transmission of the 5G signal and visible from far across the city. The FALCONs were positioned with twelve on the inner ring, and twenty-four on the outer ring.

Alongside the FALCON fixtures, luminaires from SGM and Elation provided additional beam effects for viewers closer to the tower.

Alongside the FALCON fixtures, luminaires from SGM and Elation provided additional beam effects for viewers closer to the tower.

“We were thrilled to be a part of this impressive event that lit up Düsseldorf’s night sky,” says Niedermeier. “AO Creative has a long history of working with the DO IT! agency and long experience of creating shows in the city of Düsseldorf - but this was one of the most eye-catching projects to date.

“We were proud to bring together our industry-leading lighting technology with a team of experts who really deliver – it was one big family, with everyone working together to execute this event.”

The entire project was planned with a short lead-time of just four weeks and put together during the COVID-19 pandemic. This meant that the majority of meetings were achieved via video conferencing, arranging everything from logistics and lasers, to planning and permissions. 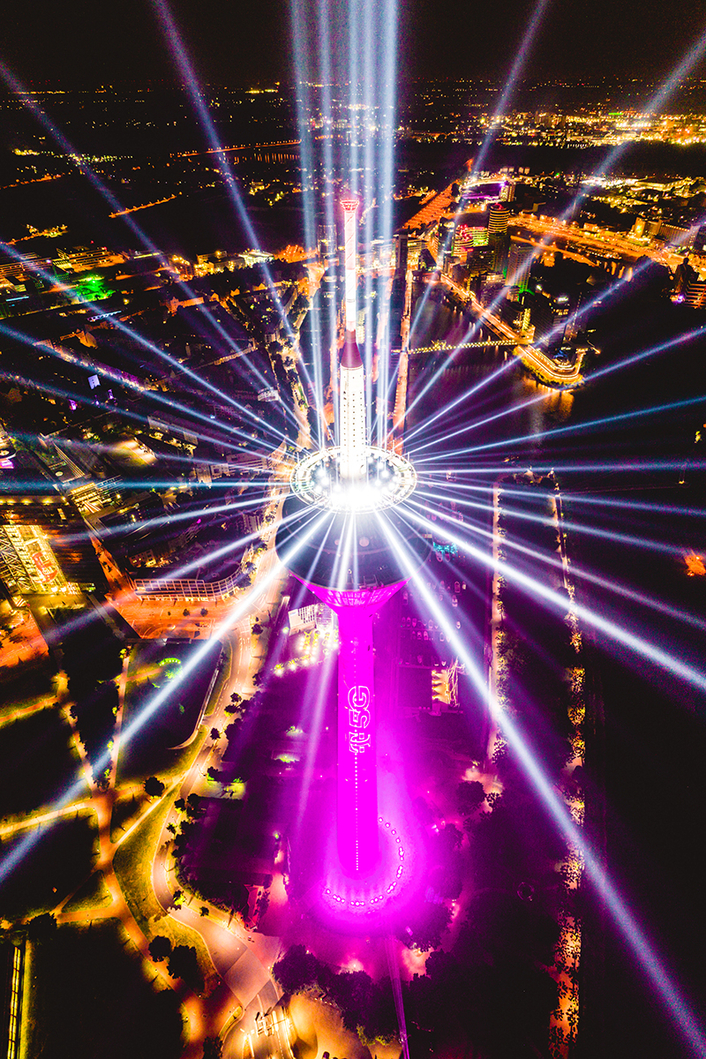 “We’re all working in a new manner, which can be challenging, but I’m proud that our team managed to adapt accordingly and prove that events can still happen, despite the restrictions,” says Niedermeier.

Lighting designer Jerry Appelt controlled the lighting from a FOH position 100m from the base of the tower. He comments: “This was a fantastic project to work on, from DO IT’s initial brief to creating the lighting design and ensuring the show would be visible from even 10km away. The FALCON searchlights provide brilliant output and it felt great to see the effect on the night. The client was very happy with the results.”

DO IT and AO provided a drone solution for aerial photography, including a behind the scenes of the light show, which was shared widely on social media.