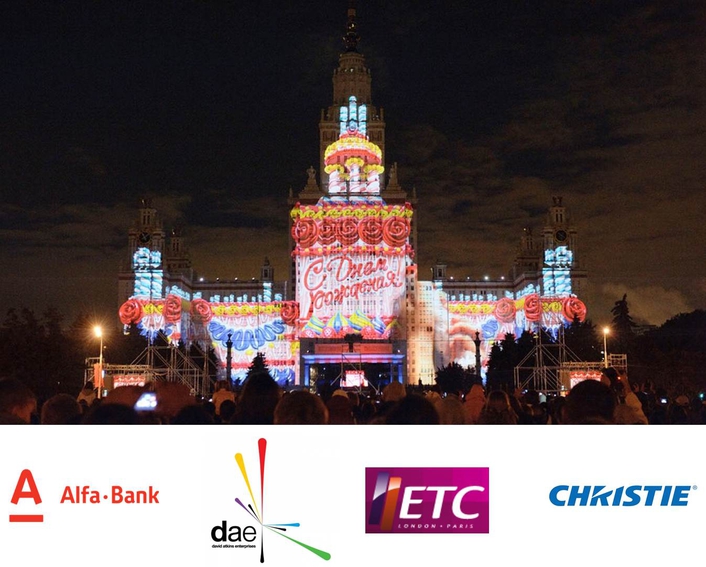 The technical implementation of the show’s visual element was handled by ETC
On Moscow City Day, the capital hosted a unique visual event: Alfa-Show 4D, a magnificent video projection show on Sparrow Hills dedicated to Alfa-Bank’s 20th anniversary. For half an hour, the facade of the main building of Moscow State University became a giant screen 25,500 square metres in size, as a multitude of spectators (nearly 800,000 people who attended the celebration) witnessed a strikingly beautiful audiovisual show.

Alfa-Show 4D was conceived by Alfa-Bank, Russia’s largest private bank, to celebrate its 20th birthday. Viktor Shkipin, Alfa-Bank’s Director of Marketing, explained that the bank has a long tradition of organising magnificent celebrations, including Russian performances by a number of legendary stars. “Our choice of medium for Alfa-Bank’s anniversary celebration was no accident. We consider our bank to be the most technologically advanced in Russia, so we chose the most technologically advanced public event medium available today: huge multidimensional video projection,” Viktor said.

The show was designed by world-renowned director David Atkins, an esteemed public event organiser, and his company, David Atkins Enterprises (DAE). Atkins has produced some of the largest and most celebrated shows in the world: the legendary opening ceremonies for the Olympic Games in Vancouver and Sydney, as well as the World Expo in Shanghai and the Asian Games in Doha. This was David’s first time working in Russia. The event took several months to prepare.

The technical implementation of the show’s visual element was handled by ETC, a company with an illustrious history of applying its rich experience in video mapping to large-scale video projections. The company’s vivid presentations have included the video mapping of Saint Basil’s Cathedral as part of the Spasskaya Tower Festival, the Golden Autumn Festival held at the All-Russian Exhibition Centre, and a video projection on the building of the Hotel Moscow as part of the Jaguar show. ETC’s international portfolio also includes works such as the ceremonies for the Asian Games in Doha and the Winter Olympic Games in Vancouver, the opening ceremony of the World Expo exhibit in Shanghai, a video projection on the Eiffel Tower as part of the La Tour est Belle show, and many others.

As with their previous works, ETC’s team of professionals used powerful high-intensity Christie 3-chip DLP projectors. A total of 81 projectors were used for the Alfa-Show 4D: a record in today’s video mapping industry. To cover the entire facade, including its lateral surfaces, fifteen Christie Roadie HD+30K projectors with luminous flux intensity of 30,000 NSI lumens and 66 Christie Roadster S+20K projectors with luminous flux intensity of 20,000 ANSI lumens were divided into several groups and installed in towers erected specifically for the show. Groups of projectors were installed at various distances and at various angles along the sides of the main building, on the roof of the central portico, and in the central equipment room located in the tallest tower, standing about six metres high behind the VIP section of the audience stands.

The projectors were controlled using a unique Onlyview software platform developed by ETC. “All our servers were working in backup mode, so in case of an unexpected failure, any one of them could be replaced. This allowed us to have a system that was backed up 100%,” explains ETC General Director Russia Ruslan Semenov.

Over the course of the show’s thirty minutes, the facade of Moscow State University lived through a series of transformations: it turned into a giant aquarium, only to freeze and disintegrate; it became, in turns, the Taj Mahal, Big Ben, and the Eiffel Tower; and it even looked for a time like a huge birthday cake. Images flickered through the ages, evolving into easily recognizable signs of our modern world... David Atkins let his imagination soar. The recurring image of the Alfa-Bank logo fitted seamlessly into the plotline, providing a unifying element to the visual presentation.

The show required a great deal of preparation. To make sure the projected images looked consistent, each window of Moscow State University’s central tower was covered by special panels. Various university services took part in the process. Even students lent a hand, since part of the building contains student housing. To thank them for their help, organisers invited the University’s students to the celebration.

Over the course of two weeks, right until the day of the show, teams of creative and technical specialists gathered at the site for rehearsals. Twenty-four technical specialists provided on-site video projection support for the show. Patrice Bouqueniaux, Project Manager of ETC France, notes that ETC’s international team was already familiar with the University high-rise: they had previously worked here during Moscow City Day 2005, and before that, fourteen years ago, during Jean Michel Jarre’s famous dynamic slide projection light show. “It’s important to note that Christie projectors are, first and foremost, extremely powerful, and that they can operate under difficult conditions that can be far from ideal and still remain completely reliable. And confidence is crucial!” Patrice emphasised.

Ruslan Semenov explained that this project gave his team an excellent opportunity to bring joy to viewers while highlighting the quality of Christie projectors and the excellence of the content produced by David Atkins. The scope of the project made this task particularly challenging: the building stands approximately 200 metres tall by 300 metres wide.

More than a thousand people took part in the creation of Alfa-Show 4D. Two hundred trucks delivered equipment for the show from several countries. A total of 2,184 cubic metres of metalwork were erected on Sparrow Hills. The show’s 81 projectors were joined by 40 powerful spotlights: light cannons that shoot columns of light high into the sky. The presentation included 5,000 pyrotechnic charges and 50,000 balloons. Symbolic snow fell on the enthralled crowd, and thousands of soap bubbles floated up into the sky. It’s no wonder 3D video mapping now includes a fourth dimension! In the midst of the event, urban climber Alain Robert, known for climbing the world’s tallest buildings without safety gear, climbed the University high-rise as part of the show.

Speaking at the press conference dedicated to Alfa-Show 4D, Viktor Shkipin compared the price tag of the show to the price of a month-long top-quality federal TV and outdoor advertising campaign evaluated at USD 6–8 million. “This year, we decided to forego TV commercials and do the show instead,” he explained. “We are positive it will work better than any TV commercial.” 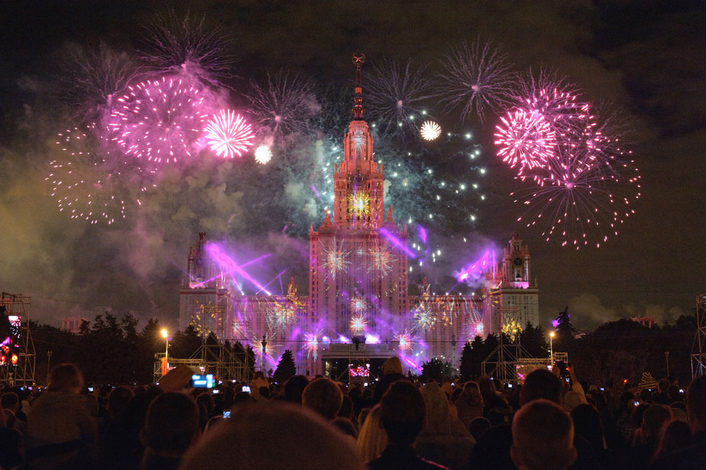 “This was a unique project,” David Atkins summed up. “It was the first time a building of this size was used for 3D projection. It was also the first time a production included the 4D element, and the first time someone climbed a building while images were being projected on it. This show was a first for so many things!”

The video projection show closed with a striking fireworks display. The entire audience – spectators who crowded outside Moscow State University and viewers who watched the TV broadcast and streaming video on the Internet – are sure to remember the event for a long time to come

Christie Works with Indoc...n Their “Meteor Tour”
Christie Roadster S+20K�...nt Temple of Edfu to Life
Service providers and sce...luminate the city of Lyon