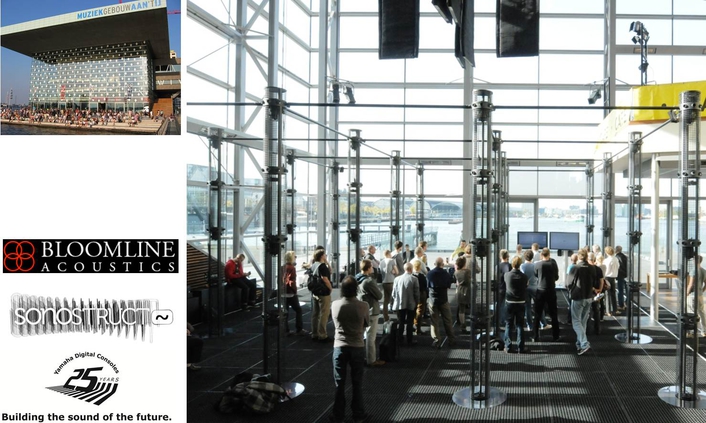 .
When Dutch composer Paul Oomen designed his new 4D Sound project, the correct technical specifications were critical to ensuring that his vision was accurately realised. Transparent sound and high quality processing were a must, which is why Yamaha technology was chosen to mix, manage and power the system.

Paul designed 4D Sound as a new, fully immersive experience in spatial listening. It features omnidirectional loudspeakers arranged within 16 mesh columns and beneath a mesh floor. Visitors walk in and around the three dimensional structure, experiencing sound images moving around, above, beneath and in between them. This explains the fourth dimension - change over time, or the speed with which a sound moves through space.

Working with sound collective Sonostruct~ and Dutch loudspeaker manufacturer Bloomline Acoustics, Paul developed a 16 x 16 x 5 metre structure, which can be toured to different locations, being set up by a crew of six in eight hours.

Bloomline did extensive testing of amplifiers from many different manufacturers for this challenging project. Yamaha proved to be the best choice, with six eight channel IPA8200s chosen to power the 48 loudspeakers placed in the 16 columns and nine XP7000s driving the subs mounted beneath the mesh floor.

“As well as delivering transparent audio and complementing the acoustic design of the Bloomline loudspeakers, the price versus quality ratio of the amplifiers made the choice easy,” says Ron.

Programmed by Poul Holleman from Sonostruct~, the system is computer controlled with all loudspeakers receiving a separate feed. All feeds are routed into the DME64 via MADI, which processes the 57 output channels with EQ and limiters. The LS9 is used to mix external microphones (for example presenters and DJs) back into the main computer and to remotely control MIDI data. The whole installation uses the internal clock of the LS9.

“The technical features of the system open up new possibilities and insight in composing with space and movement, the shift from subtle to obvious movements of sound playing a prominent role in the listener experience,” says Ron. “The control and processing of the sound, managed by the LS9 and DME64N, make it possible to create suggestions of a wide range of different virtual spaces and atmospheres.”

The 4D Sound installation made its public debut on 19th October in the foyer of Muziekgebouw aan ’t IJ, the concert hall at Amsterdam harbour. As well as inviting the public to enjoy its unique atmosphere during the day, at night it is used for DJ sets and it was a feature of the five day Amsterdam Dance Event.