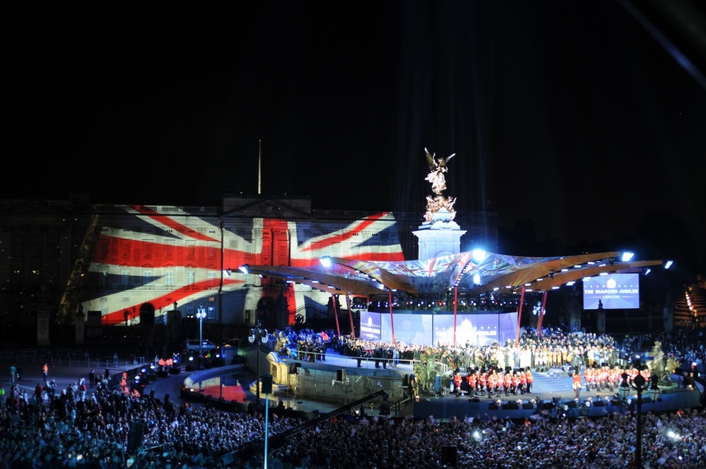 The concert delighted hundreds of thousands of spectators that turned out for the event
The award-winning wysiwyg previsualization suite from CAST Software of Toronto, Canada was part of the royal fanfare at the recent Queen’s Diamond Jubilee Concert, held at Buckingham Palace, celebrating the 60th anniversary of Queen Elizabeth II’s reign.

World-renowned Lighting Designer Durham Marenghi sat at the creative helm with a tall order to fill, as the Concert was attended by the Royal Family and broadcast worldwide. Not only did he have to provide stellar lighting for some of the world’s biggest pop stars but he also had to deliver something that would prove equally gripping for the live and TV audience at home. To achieve the lighting effects he wanted, Marenghi employed more than 240 Clay Paky fixtures, hired from London based rental house Neg Earth, to deliver a stunning, varied and dynamic lighting design for the superstar acts.

At the request of BBC Executive Editor Ben Weston and Event Producer Guy Freeman, Marenghi and his team needed to have a mask in place to disguise the images during preparation to prevent the public, press and other broadcasters from obtaining pictures in advance of the concert. For lighting programming and for similar reasons they made extensive use of wysiwyg to keep their real lighting under a bushel. 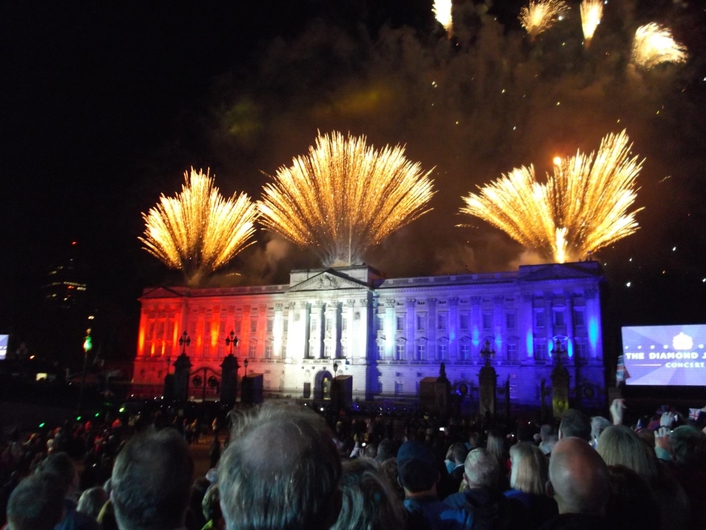 Marenghi explains, “I imported the various stage and architectural elements into wysiwyg and Tim Routledge was able to programme most of the musical performances at the LH2 rehearsal studio in Acton. I was able to show Television Director Geoff Posner all of his (over 30) camera views and site line issues such as LED screen heights and Imag truck positions were ironed out in the virtual world. It was also of great use to me in the early days of apportioning budgets to present renders to the BBC and RWP.”

Marenghi spent two hours at the beginning of the programming week focussing the Syncrolite Arena Colors which provided the main building illumination for when daylight and pyro was too strong for the projection image and handed over the rest of the week’s dark time for projection line up and tests whilst he continued his lighting programming in the wonderful world of wysiwyg. He commented, ”Peter Debrecini responded with great speed to my request for personalities for brand new fixtures from i-Pix and Clay Paky and without this we could not have programmed so comprehensively and accurately.”

One of the important aspects of the Diamond Jubilee Concert was the lighting of the Palace façade and the inclusion of 3D mapping for effective video projection once the sun had finally set. Marenghi took on the role of Royal Astrologer as well as lighting designer as he prepared a detailed running order with precise daylight levels throughout the evening to demonstrate exactly which artist would have a dark enough canvas for the BBC’s video mapping aspirations.

Marenghi said, “Recognition should go to Steve Greetham and Andy Joyes of XL Video with whom I determined the layout and amount of projectors that would fit the budget but also guarantee 200 lux onto the Palace ‘screen’.” For the much-talked-about Buckingham Palace projections, XL Events supplied a total of 36 Barco FLM HD 20K projectors arranged in six stacks of six, 12 Barco Image Pros and 2 Lightware DVI matrices, all under the watchful eye of Master Projectionist, Andy Joyes and his team.

He continues, “These sequences involved a delicate balance between stage lighting and video image and it was gratifying to then see the amazing work of Sam Pattinson, Trunk Animation and United Visual Artists garner so much praise and interest after the event with the projection system that XL and I had designed.”

The projection sequence during Madness really caught everyone’s imagination and rightly became the WOW factor of the whole evening. Good projection is an exercise in darkness control and Marenghi was able to assist Sam Pattinson and his team in rather a unique way. 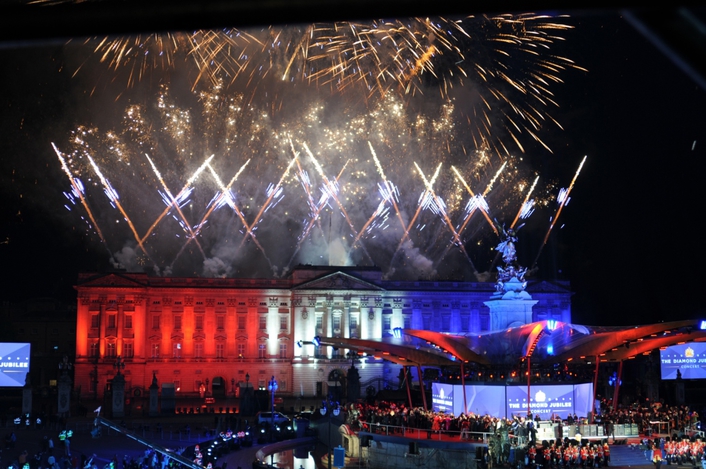 Due to the fact that there were many important guests from around the globe staying in the Palace, the production team was instructed not to shine any light onto the Palace after 23:30, now as it got dark around 22:00 this represented a very serious problem and there was much talk of boarding up windows in the state guest rooms and other intrusive black out strategies when Marenghi hit upon a solution. As the building had been mapped so accurately the team were able to create a mask for the Dragonfly 3 that effectively blacked out each window allowing the projection team to work all night without affecting the denizens of the ‘screen’.

“Without wysiwyg the time spent on projection would have been curtailed and compromised the astounding images seen upon the Palace,” said Marenghi.

The concert delighted hundreds of thousands of spectators that turned out for the event and Marenghi and organisers were thrilled with the results. “For such a high profile event, we actually managed to keep much of the design a secret and I have wysiwyg to thank.”

CT Brings Jubilee Celebra... to the Streets of London
Clay Paky Waves the Flag ...for the Queen’s Jubilee
Chyron Graphics Fit for a Queen