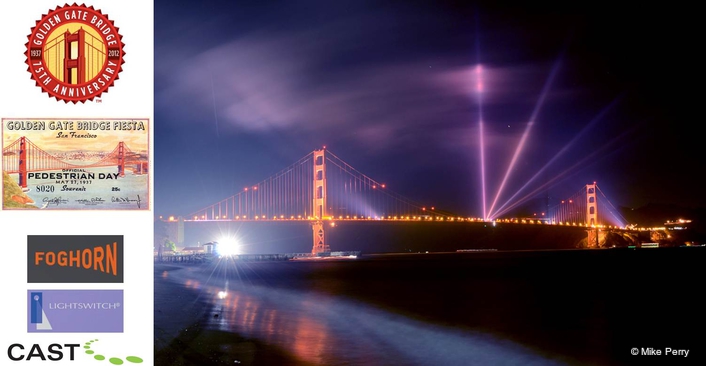 .
Arguably the most recognizable landmark of the US’s West coast, San Francisco’s Golden Gate Bridge recently celebrated its 75th birthday. Thanks to wysiwyg, the award-winning previsualization suite from CAST Software of Toronto, Canada, tens of thousands of spectators experienced the light show and pyro celebration as a complete surprise.

Event producer Don Richards of Foghorn Creative brought in San Francisco-based Lightswitch with lighting designer Norm Schwab to help organize the event, along with Prelite of San Francisco to design the lighting concept. Working with Syncrolite for lighting the bridge, Schwab and Prelite created a moving tribute with historical significance. The final effect was reminiscent of the Scintillator, a vintage lighting technique that was introduced to the city at the Pan Pacific Exposition in 1915.

The show culminated in a blaze of 75 Syncrolite light beams – the only lights used on the show – that rose majestically from a barge stationed in the bay and disappeared into the night sky, accompanied by a fantastic fireworks display by Pyro Spectaculars North. Schwab worked with Tom Thompson of Prelite to achieve the perfect look to enhance the beauty of the bridge.

The entire show was ‘pre-vized’ at Prelite in San Francisco using wysiwyg, programmed with two MA Lighting grandMA consoles with a five-mile-wide staging area rendered including the bridge, five moving barges, and key areas of land including Marina Green, Crissy Field, and Alcatraz. “We spent five days at the Prelite offices, using wysiwyg for its ability to render the beams of the Syncrolites up to a mile in length” Schwab says. “The bridge was open to traffic except for the event itself, so we had to make sure the show was locked in other than touch-up focus before load in.” 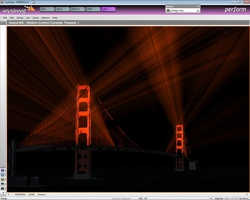 Schwab continues, “While we were planning for the event 9 months in advance we had very little time with the actual lights in place due to budgetary, logistical and safety concerns. The bridge only closed for the 30 minutes of the show which meant it was open to vehicle, bicycle and pedestrian traffic all during the install and dismantle. To be able to plan the lighting design (2/3 of which was on a moving object) program it, and then be able to present it to the key design team members in advance was not only valuable...it was a necessity. The show would not have been possible without the 5 days of Prelite-wysiwyg programming.”

Prelite offers design services to help communicate concepts in advance and achieve as much of the design process in advance to save time, energy and manpower on site. Clients use a real control console with virtual scenery and a virtual lighting rig to create more design time and reap the benefits of 3D preprogramming. In addition to an experienced staff, Prelite offers comfortable work environment and all the latest technology to realize your vision. This of course, includes the latest version of wysiwyg with the most current Library updates.

Tom Thompson of Prelite explains, “wysiwyg R28 was an extremely useful tool for the Golden Gate Bridge project. Norm and Erik worked all week cueing to timecode, and were then able to present the entire light show to their clients a week prior to load in. In my opinion, this is the best application for using wysiwyg: once on site, all we had to do was touch up focuses and hold a few rehearsals. If we had to do the work that we had done in the studio, live, it would have been impossible to maintain the “punch” of seeing it for the first time. Imagine, as a spectator, witnessing the entire programming session live all week – how, then, would the spectacle of the show be “exciting”...well, except for the fireworks!” 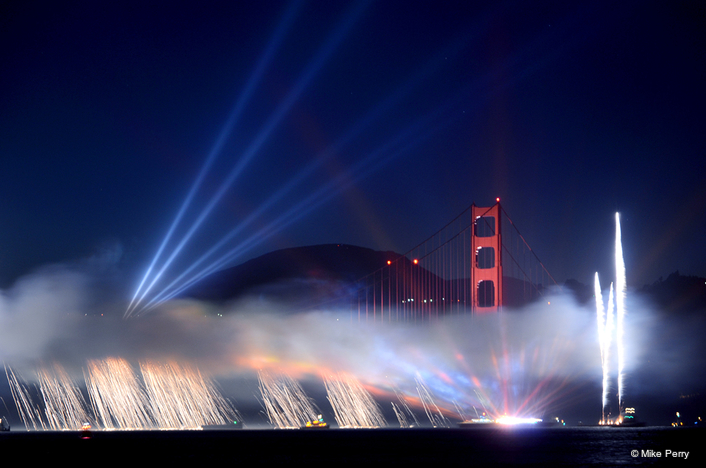 He added, “We also have to consider all the benefits of wysiwyg that you may forget, such as wear and tear on the fixtures, lamp life savings, crew savings, weather issues, POV advantages (had to radio to Norm at different locations), and the reality that lights could not be positioned on the bridge for more than the 4 days they were there.”

The show was considered a huge success, particularly to the thousands of spectators. “Everyone had one goal in mind,” concludes Schwab. “Everyone loves the Golden Gate Bridge, and this celebration made people feel proud about the bridge and reconnected to the Bay Area.” 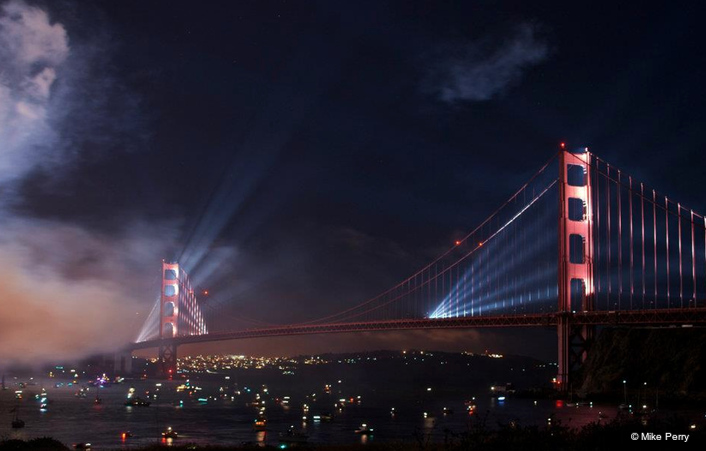 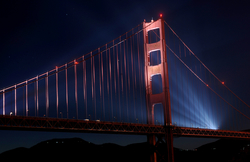