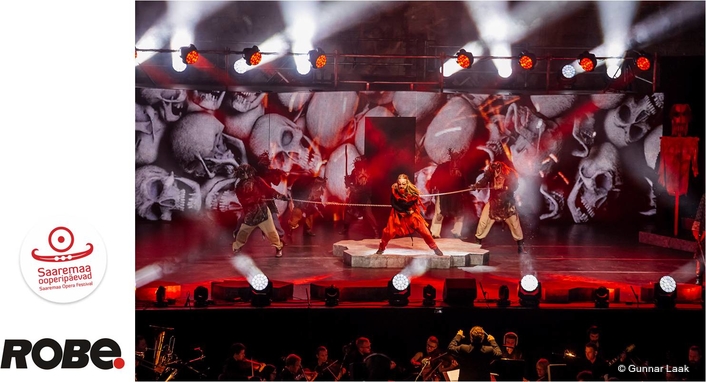 Every year, the charismatic island of Saaremaa in Estonia stages ‘Opera Days’, a major international opera festival organised by the Eesti Kontsert Hall in Tallinn, which this year featured the world premiere of an exciting new production -  “Nurjatu Saar’ (The Evil Island’) - by famous Estonian rock musician,  pianist and composer, Rein Rannap.

This was performed in a large 2200 capacity structure erected in front of Kuressaare Castle in the island’s capital.
Lighting was designed by Margus Vaigur, who, in addition to his freelance design work, heads the lighting team at the Endla theatre in Parnu, a high profile repertory house. He’s lit the Saaremaa Opera Days event once before in 2013, and this year was asked back by director Vahur Keller. 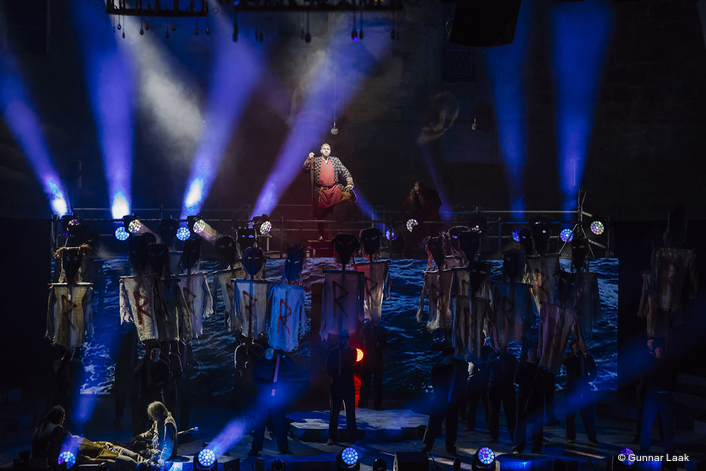 He specified 84 x Robe moving lights to assist with an eye-catching lighting scheme to accompany the drama unfolding onstage!
Inspiration for the lighting started with the music and ambience of the piece, explained Margus. ‘The Evil Island’ is a familiar story about power and fragility which immediately lent itself to being lit combining techniques from two very different performance genres – rock and opera. These actually share several aesthetic character traits – they can be extreme in every way and highly contrasty!

There was a video element upstage to consider, adding a third layer to the visual picture, and right from the start, Margus knew that Robe’s Spiider LED wash beams would be perfect to provide all the base stage lighting coverage.
A series of trusses were flown in the roof underneath the tensile roof structure. 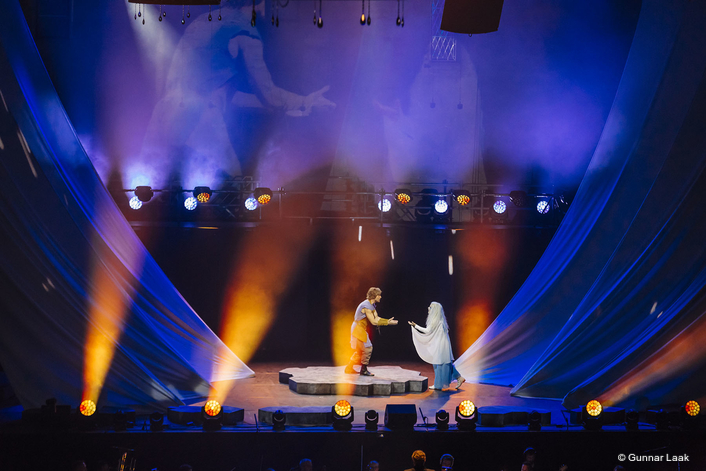 Sixteen Spiiders were spread along two sets of balcony rails on a raised upstage section of the set which was designed by Jaanus Laagriküll together with the costumes. These were great for low-level stage washes and, zoomed in, for a series of spectacular in-air effects.
The other eight units were alternated with LEDBeam 100s along the front of the stage.

Margus loves the colours and also the quality of the Spiider’s warm and the cool whites, and for this production they also featured as a highly effective strobe source.
“It was the primary fixture of this performance,” stated Margus, who was “very satisfied” with all the features and the edginess he could create using them. “Spiiders provided the precise solutions I needed to deliver all the effects and the specific atmosphere that I had promised the director”. 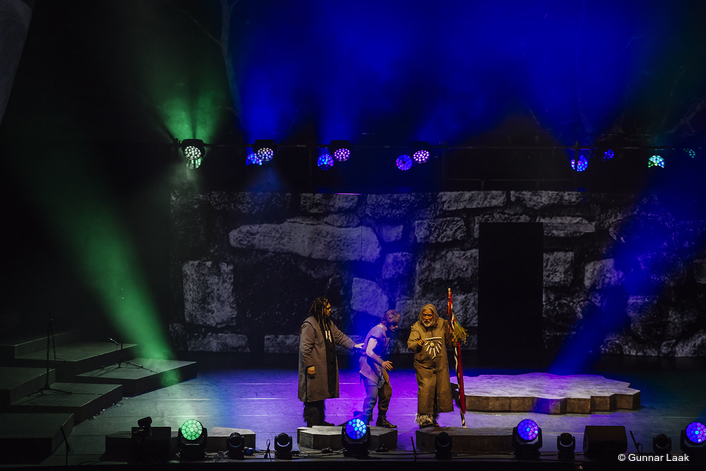 The LEDWash 800s on the overhead trusses were provided supporting wash coverage in conjunction with the Spiiders. They also threw light into some more specific downstage areas.
The eight LEDBeam 100s were on a downstage ramp along with eight of the Spiiders (as mentioned above), and used for sweeping out into the audience adding mood and involving them in the action, and for some interesting and off-beat close-illumination of the artists.

The 20 x MMX WashBeams were spread out over the trusses and used only in beam mode (as all the washing was taken care of by the LEDBeam 800s and Spiiders), so they produced clean open-white shafts and slices of light together with some excellent strobing which was totally different to that of the Spiiders!
There were 14 x MMX Blades on the rig mostly rigged on the downstage trusses with two fixtures on the stage-right ends of the two upstage back trusses.  Their main functions were key lighting in open white or CTO. Margus also applied a few subtle gobo washes, but these were very discreet and softly out of focus, in keeping with the more mellow lighting elements of the piece.

The Spiiders largely defined the space in terms of colour, while the MMX WashBeams provided numerous effects and contra-looks.
The only other lights on the stage were seven 2K PC fresnels, plus some serious atmospherics from two foggers and two hazers.
The biggest challenge for lighting – as always – was the short timeframe for rigging, technical rehearsals and programming.

In addition to that, it was attaining that fine-tuned balance between the music and visuals. With opera – and rock – both being such expressive vehicles, it was important that everything converged for a harmonious end result.
Margus programmed and ran the show himself using an MQ200 console. Usually when he is involved with a show, he will programme and take everything up to press night, then hand over to an operator after the premier, but for this show which ran for just two sold-out performances, it made sense for him to undertake everything himself.

Margus has been using Robe products in his work for over 10 years and thinks the brand’s “innovative and proactive” approach to product development and bringing technology to the market has been of great benefit to all users and enthusiasts.
As a theatre designer, he’s keen to see what the next colour mixing developments will bring.
“Nurjatu Saar’ was directed by Vahur Keller and choreographed by Märt Agu. Video content was created by Taavi “miisu” Varm and the conductor / musical director was Martin Sildos. The Robe equipment was supplied by Tallinn based rental company, E&T.

Saaremaa is the largest island in Estonia measuring 2673 square kilometres. Kuressaare is the capital with about 15,000 inhabitants … out of around 31,000 in total. It’s been inhabited since at least 5000 years BCE and forms the main barrier between the Gulf of Riga and the Baltic Sea. A wide variety of rare wildlife species reside there, ranging from insects to seals. The smallest protected wildlife species include Clouded Apolle butterflies and Roman snails. Three main international sporting events take place annually on the island - the Saaremaa Rally (cars), the Saaremaa Velo Tour road cycling race … and the Saaremaa 3-day marathon. Opera Days is one of a number of other festivals and events for this action packed and unique location.