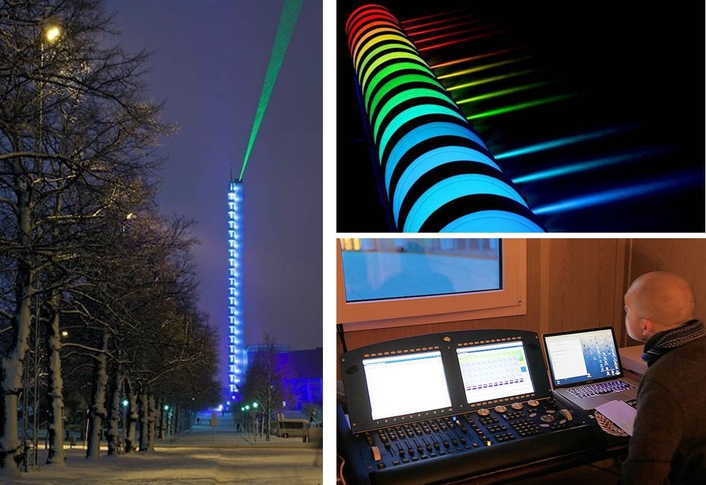 .
During the darkest days of winter, Helsinki brightens the nights in an event called Lux Helsinki. This year’s event featured a series of architectural lighting installations and fine art performances around town designed to enchant the eye and illuminate the soul.

Lighting consoles from High End Systems, a Barco company, were in command of one of Helsinki’s most visible landmarks - the Olympic Stadium Tower - which was transformed into a light installation called the Variant Spectrum.

Lighting Designer Jukka Huitila of Sun Effects created the spectrum of color using LED lighting fixtures and a 12-watt laser positioned on 22 balconies of the tower. Programmer Sami Rautaneva chose a Wholehog 3 console and a DP8000 to program and run the LED fixtures, set up in two universes. A Road Hog Full Boar helped with the first day’s focusing and setup procedures, and also served as a cost-effective backup. The HES consoles were provided by Tommi Stolt and Moving Light Oy. 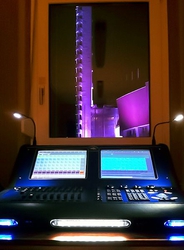 The show ran automatically throughout the evenings from Dec. 31 to Jan. 9 in durations of seven and a half minutes.

“When I was asked to do this programming, first thing I asked for was a Wholehog 3,” Rautaneva says. “I wanted to have a familiar interface and a tool that I can use fast and effectively. We had four evenings to set up and program and there were a lot of other things also to be handled which would interrupt the programming. Like, fixtures are outside and Finnish weather at wintertime can be surprising. Some of the fixtures we had never used. We were using wireless DMX. Moving in the tower balconies was slow if something had to be fixed. We could see only one side of the tower. Things look different when you see them at a distance.  And so on.”

“Wholehog 3 has been my choice in all events I have programmed since the console came to Finland,” he says. “I have used other consoles only when there hasn't been a Wholehog available.”

The control room was at the top of the tower. “Daniel Richert, our technician, was in the tower during the showtime. He had to take care of the laser and shut it down if there was flight traffic. Lights were run by the console automatically and Daniel just had to switch it on and off.”

Rautaneva currently uses the Wholehog 3 as technical designer at the Tampereen Työväen Teatteri  (referred to as the TTT Theatre). When it comes to programming features on the consoles, he says, “I really enjoyed the cue and programmer editing features, especially when creating fanned timings. Also, HS color picker was great in creating and adjusting the spectrum of colors. It just feels good to program on the Wholehog 3.”

About Sun Effects
We are a design house selling visual realizations where unique solutions and target audience are combined as a dynamic ensemble. Our design history is versatile and it covers company events, entertainment, stage arts, exhibitions, museums and other public spaces.

We create a customized expression for your project. We serve you with great artistic creativity. Comprehensive and well-tailored design is the best way to deliver your message and look in a unified ambiance.

Audiovisual design is perfected with a well led professional crew. We use top technicians and select the crew based on the project’s needs. Light, sound and video are overwhelming tools for expression. We focus them to match your purpose with style.

W-DMX™ Saves Season of ...over 4000 Meters of Cable
Ukraine Rocks out With Hi...ems Products and Consoles
TechnoPro Celebrates its ...ing with High End Systems