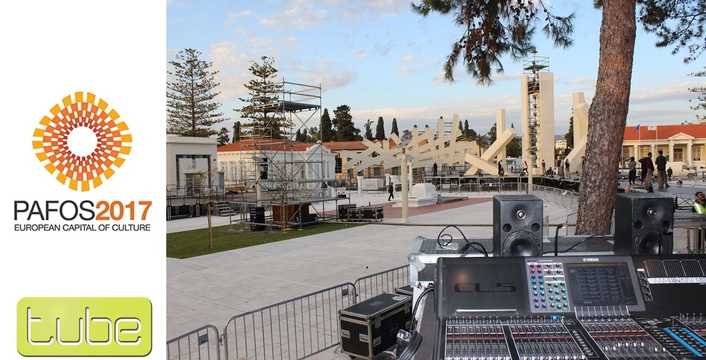 Audio fanatics tube uk designed sound for a dazzling Opening Ceremony to mark the start of the ancient and mythical city of Pafos, Cyprus’s year as joint European Capital of Culture for 2017 (together with Aarhus in Denmark).Working for Pafos2017, tube was recommended for the project by Liz Pugh from outdoor arts specialists Walk the Plank, producers of the main Opening Ceremony (OC) show in central Pafos together with a team of Cypriot creatives and artists.

A special soundtrack for the show was written by Pafos-born international composer and music director Christina Athinodorou, who combined classical and electronic elements into the intricate soundscape.

tube’s Melvyn Coote took up the challenge of delivering sound for a cast of hundreds and an enthusiastic audience of around 12,000 who packed into the 28th October Square in central Pafos to enjoy the occasion which was also broadcast live by national TV network, Cyprus Broadcasting Corporation (CYBC).

He liaised with a number of locally based audio suppliers and compiled a control specification which was sourced from tube’s rental stock in Manchester, UK. 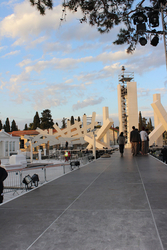 The project involved three site visits by Melvyn to scope out the location for the spectacular mixed-media show.

It’s arguably the largest integrated live show seen on the island, which from a sonic angle  involved a lot of organising and communication “to amalgamate kit from around seven different companies, who are all geared up to provide a good system for about one medium sized live show … which is the market there in Cyprus.” comments Melvyn.

This was running in conjunction with additional locally supplied control including a Yamaha QL5 and another RIO 3224 for additional inputs.

tube also shipped a complete comms system comprising 24 ways of wired and 4 ways of wireless which was used for full show communication.

A 3D surround sound concept was at the heart of the system around the square, with 9 points of PA including two stacks either side of the Town Hall servicing action on one of the two main performance stages, while the other seven stacks fed the soundscape that was integral to the show narrative.

“Getting the audio movement flowing between all these nine point sources was a crucial element of the sound design and vital to the storytelling, where certain effects needed to be in certain places at specific times.” explained Melvyn.

The PA stacks included 20 x L-Acoustics Kudos and subs, 16 x Martin W8LCs and subs, 12 x Nexo GEO Ds,  and 12 x Turbosound Flex Array … as well as some others! There was a lot of boxes … and a host of audio inputs!

One main PA consisting of 3 x 4-deep stacks of Turbosound Flex, was rigged into a scenic constructed Lighthouse towering 10 metres above the square – these created the ‘voice’ of the lighthouse, which was the essential narrative for the whole show. 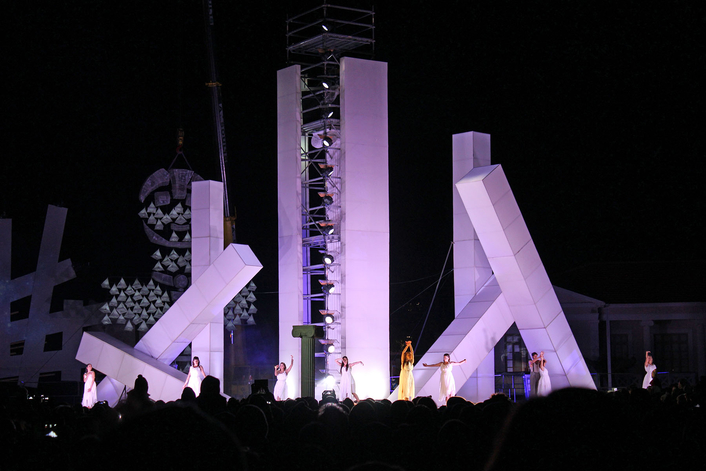 A 100 metre catwalk provided a runway entry for 300 children, 40 young dancers, and gymnasts and 15 professional dancers onto the main stage under the lighthouse.

A plethora of groups took to the Town Hall stage at different times – including the Choir of the Pafos Music Lyceum directed by Isabella Christofidou, the Pafos Municipality Band directed by Zacharias Evangelou and the Aarhus Jazz Orchestra.

Ensuring that all these different performance genres and areas had good, clear and unobstructed audio for the public’s enjoyment was a major task.

An additional parameter to galvanise Melvyn, Adam and the audio team … was the decision to stage a massive concert by famous Greek singer Alkistis Protopsalti immediately after the end of the OC, requiring a completely new and different FOH setup, monitors and backline on top of the Opening Ceremony show … that could be turned around in 10 minutes!

All of this had to be factored into the overall audio management, the plans for stage layout, etc. 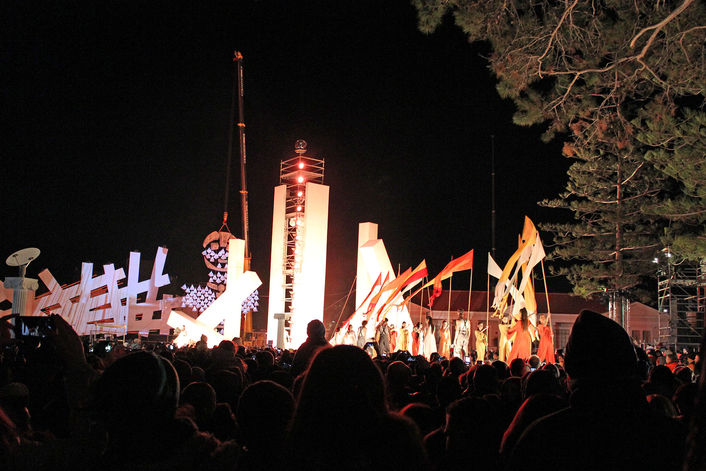 Irascible weather made rehearsals difficult! A mini storm, blustery winds and driving rain on the Thursday ripped the structure off the FOH position soaking all the control kit. Sorting this out ate into about 6 hours of rehearsal time which was crucial due to the amount of artists involved … BUT everyone pulled together to salvage the situation in challenging and stressful conditions.

“It was definitely a ‘moment’ says Melvyn … adding “Of course, this is also all part of the edginess and unpredictability that makes site specific work like this so exciting. The camaraderie between the UK production team and the Pafos suppliers really developed during the week, with the adverse weather also encouraging all to work together and deliver a smooth, successful and very special event”

On Friday evening the weather cleared and, portentiously, on the Saturday it warmed up as the sun beamed throughout the day heralding a calm evening to launch Pafos 2017 … with a totally unique, and beautifully memorable show.