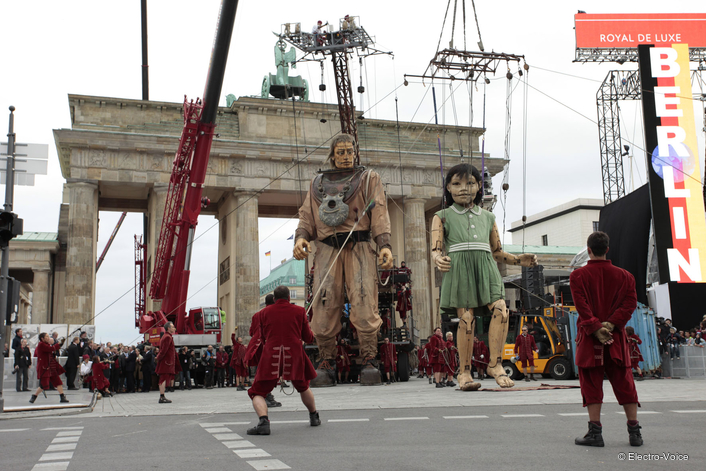 The Berlin Wall Spectacular
To celebrate the 20th anniversary of the fall of the Berlin Wall, festival organizers engaged street theatre specialists Royal de Luxe to provide a 'gigantic' spectacle. TSG AG of Berlin was responsible for the sound production as the performance wound its way through the docklands. The Electro-Voice equipment deployed included X-Line and XLD line arrays, TG-7 amplifiers and NetMax N8000 controllers. 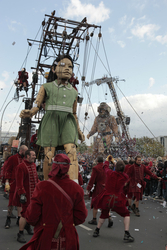 To help celebrate the 20th anniversary of the fall of the Berlin Wall, the organizers of the Berlin Festival, which ran from the 1st to the 4th October 2009, invited some rather special guests: the French street theatre company Royal de Luxe with their gigantic mechanical marionettes. For four days, two almost 15-metre-high figures wandered the length and breadth of the German capital performing the fairy-tale spectacular: Das Wiedersehen von Berlin ("Reunion in Berlin"). The scenery for the production included the great boulevards and historic landmarks of the capital like East Berlin's famous avenue Unter den Linden, the Straße des 17. Juni (the western continuation of the same), the parliament building (or Reichstag) and, of course, the Brandenburg Gate. Hundreds of thousands of revellers witnessed what was, in effect, an allegorical account of the reunification of Germany in 1989, with the giant marionettes – the Uncle and the Niece seeking and rediscovering one another after long years of separation – as protagonists.

It took some 25 companies – among them TSG AG of Berlin, led by MD Marcel Fery, which was responsible for the audio production in the region between the main station and the docklands – to satisfy the colossal technical and logistical demands of the open-air production. "Each scene was treated as a separate event," recalls Project Director Carsten Robert of TSE AG. The time pressure was enormous. The TSE AG team worked tirelessly overnight each day of the festival to set up two large line-array systems on the Hugo Preuss bridge due to the event starting at 7am each day. These consisted in each case of 12 Electro-Voice Xvls array elements and 12 Xsubs, both from the X-Line family. The technicians managed the feat in less than four hours with the help of moving platforms with loading arms up to 14 metres in height and safe working loads in the region of 12 tons flanked by a number of cranes. 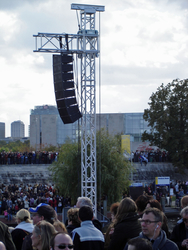 The initial objective was to provide sound reinforcement – the program material being primarily live music, a specially composed soundtrack played by Royal de Luxe's own band – for an area the size of two soccer fields. The signal was transmitted by radio link from the moving marionettes to the line arrays. For the final sequence in the docklands, the large line array was dismantled and moved overnight to the Moltke Bridge 300 metres away, where the area to be covered was even larger: the entire stretch from the main station along the river to the medical school (or Charité) including the numerous bridges along the way. This required, in addition to the main line array, the introduction of additional stationary delay positions. Mounted on specially developed rigging towers, these stationary delay positions comprised in each case eight Electro-Voice XLD281 array elements and two Xsubs. All the enclosures used were powered by Electro-Voice TG-7 amplifiers driven by Electro-Voice NetMax N8000 controllers. "This solution made an additional matrix configuration possible," explains Carsten Robert. "By dividing the enclosures into individual groups, we were able to make more effective use of the line-array system. This made our job a great deal easier." In all, just under a million spectators witnessed the (literally) gigantic spectacle. In the view of Carsten Robert, the production was a total success – in every respect: "As regards our own work as sound technicians, everything went wonderfully and we got great notices. As a Berliner, though, I must add that it was also a very touching spectacle and a joyous occasion to boot. It was great to have been a part of it all." 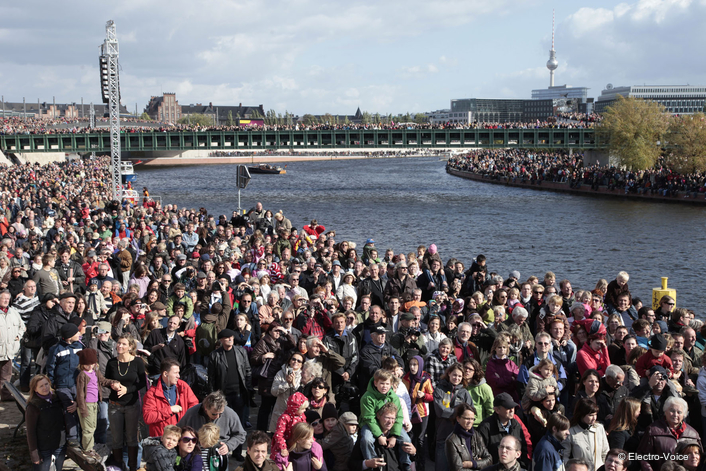