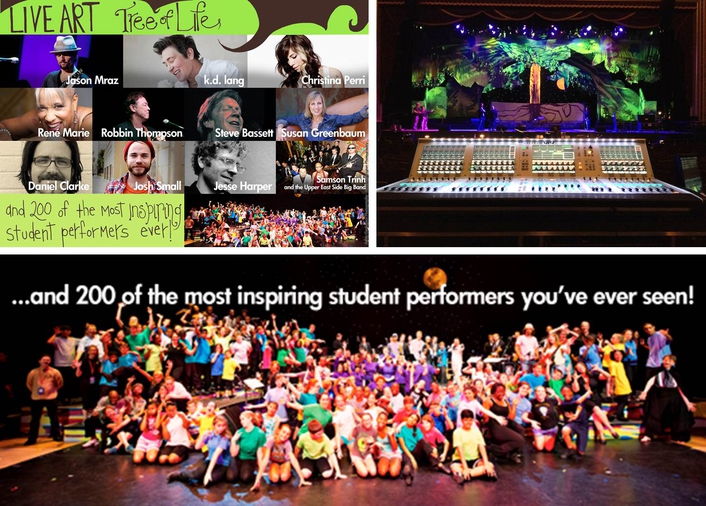 .
LIVE ART: Tree of Life is a unique collaboration that brings prominent recording artists, musicians and children together. Held at Richmond, Virginia’s 3,200-seat Landmark Theater and produced by the School of the Performing Arts in the Richmond Community (SPARC), this winter’s LIVE ART: Tree of Life featured GRAMMY-award winner and SPARC alumnus Jason Mraz, along with k.d. lang, Christina Perri and other artists performing with more than 200 children of all abilities. Soundworks of Virginia handled the live sound for the event, using two HARMAN Soundcraft Vi4 digital consoles for front of house and monitor mixing duties.

Any show with multiple performers is always a challenge, but the LIVE ART: Tree of Life event presented an unusual and daunting logistical hurdle: the monitor console was located behind some of the scenery, which blocked monitor engineer Bryan Hargrave’s view of the pit band and the bands and performers at one side of the stage. The fact that the house band was positioned in the orchestra pit, right in front of the main PA system, did not make his or FOH engineer Grant Howard’s job any easier. A group of children in the box seats at stage left were also in front of the PA and had to be miked for the show.

Thanks to some careful aiming of the PA speakers and the Soundcraft Vi4’s functionality and its ViSi Remote iPad control, the show went off without a hitch even though it was, in the words of Howard, “like performance art, musical theater and bands playing all rolled into one,” and mixed seasoned veterans with children with little or no experience in front of an audience.

Soundworks used 62 inputs in the FOH console and configured the output with left/right/subs on an aux configuration for the main outputs plus two more feeds going to the under balcony and a feed dedicated to the hard of hearing. In addition to the complex live mixing duties, it was necessary to generate 62 channels of audio for a multi-track recording to be used for a planned PBS documentary film.  “It was about as simple a hookup as I’ve ever seen for such a complex routing scheme,” Howard noted. “We just plugged in the MADI interface, turned on the consoles, assigned things accordingly, and that was it.”

“The ability of the Vi4 to be controlled by an iPad was an absolute lifesaver,” noted Hargrave. “In any other situation, not being able to see the performers during the show would have been a severe disadvantage.”

Instead, during rehearsals Hargrave was able to walk away from the monitor console, listen to the mix from anywhere in the theater and make adjustments. “We had 16 powered monitors across the stage and I could walk right up to a performer, the piano player or a group of singers, hear exactly what they were hearing and use the iPad to make adjustments to the monitor mix right on the spot. Without the iPad app, I would have had to walk to and from the console a hundred times.” After dialling in their monitor and FOH mixes, Hargrave and Howard saved their mixes using the console’s Snapshot feature.

Hargrave and Howard only had two days of rehearsals to dial in the sound for the more than 200 people who were onstage at various times, and found the Vi4’s ability to recall scenes indispensible. “By the time the show went on, all I had to do was scroll from one Snapshot to the next and the mixes were right there,” added Hargrave.

“This was the most out of the ordinary show we’ve done on the Soundcraft Vi4, but we found it to be perfectly adaptable to the situation,” Howard pointed out. “In my experience it’s also the easiest console to teach visiting engineers how to operate.”

For Soundworks, none of this would matter much if the Vi4 didn’t sound great. “We’ve demoed a lot of boards and Soundcraft is one of the best-sounding digital consoles,” said Howard. “And aside from being extremely useful, the color-coded FaderGlow™ controls look great in the dark! We got a lot of compliments about how cool the board looks from people in the audience walking by it.” 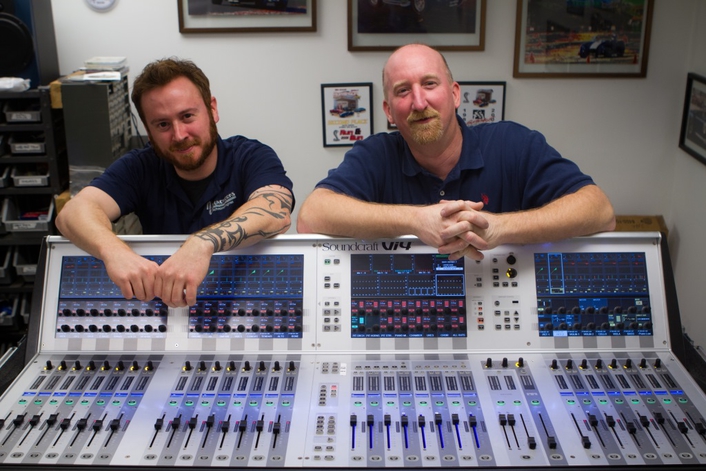 “Doing the LIVE ART: Tree of Life event is a humbling experience,” noted Soundworks president Steve Payne. “It’s just absolutely astounding to watch these kids perform with artists of the highest caliber. This is truly a once-in-a-lifetime opportunity. Many of these kids have special needs and face challenges on a daily basis. Watching them perform on this stage is like watching a flower blossom. The process is hugely rewarding for all of us—the kids, the performing artists, the crew and the audience alike.”