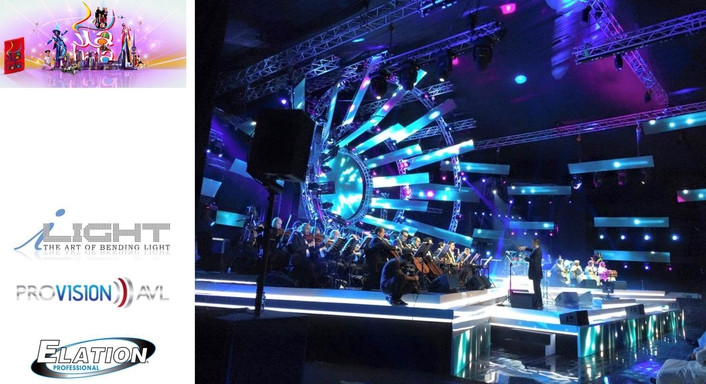 Leading Middle East lighting and sound company iLight of Dubai was called on to provide lighting, sound and stage design for this year’s Hala Febrayer Festival and turned to Elation Professional lighting and LED video equipment to light performances by top Arabic artists.

Some 80,000 tourists converge on Kuwait each February to attend the annual Hala Febrayer Festival, a month-long event featuring cultural activities and entertainment that includes live television performances by some of the region’s most popular singers. The most watched live TV show of the year in the Middle East, Hala Febrayer consists of five concerts over five nights with three artists performing each night. Produced by entertainment and production company Rotana Audio Visual, this year’s show, broadcast on Rotana TV and held at the Kuwait Ice Skating Rink, was postponed until March due to the death of King Abdullah of Saudi Arabia.

Over the last 14 years, iLight has found success working on local events as well as with international artists who tour through the region and the company has been relying on Elation gear more often the past few years. iLight acquires its Elation lighting and video products through Elation Middle East distributor Provision AVL of Dubai, owned by Gary Boujikian. Provision AVL provided engineering and technical support on this year’s Hala Febrayer.

This was iLight’s first time working on the event and the result was stunning. The highlight was a unique three-ringed concentric truss structure of 4m, 6m, and 10m truss circles that emulated a rose with lighting fixtures adorning the rings and LED screens representing rose petals. 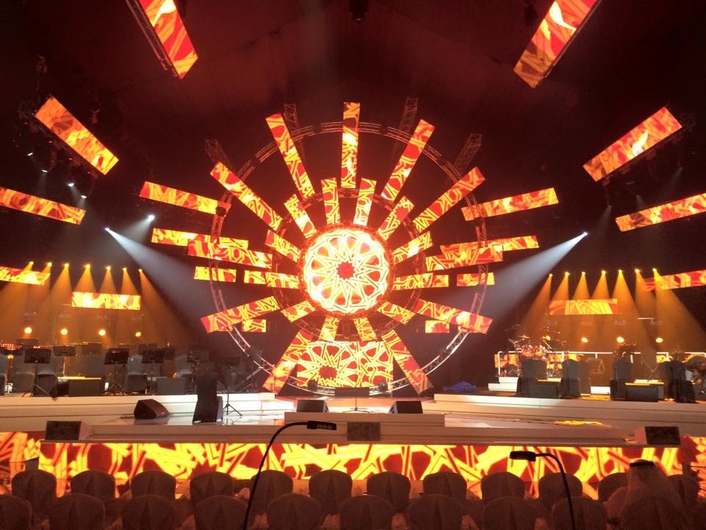 Lining the truss rings for mid-air effects and big beam looks were Elation Platinum Spot 15R and Platinum Beam 5R moving heads. “The Platinum Spot 15R is currently my favorite light,” Vince, iLight’s founder, stated.  “I like the colors very much, it’s really quick with a very sharp beam and it has proven to be very reliable.” Additional Platinum Spot 15Rs were placed upstage left and right to light the band with more Platinum Spot 15R fixtures spread across the floor.

Vince has used the Platinum Beam 5R on past events and is very familiar with its powerful output and speed, which he says reminds him of a scanner. “We had them all over the set – behind the LED screens, on trusses left and right. Not only are they very reliable, we couldn’t tell the difference between the Platinum Beam 5Rs and the Sharpy,” he says.

Lining the truss circles for added color were Elation Opti Quad PAR lights while ELAR Bar fixtures were used to uplight artists from a floor position. Although the original design called for more ELAR Bar’s in the rig, because the ice skating rink lacks optimal rigging points it was necessary to alter the design last minute. Lighting director and operator for the show was Helio of iLight, who Vince has worked with since 2008. 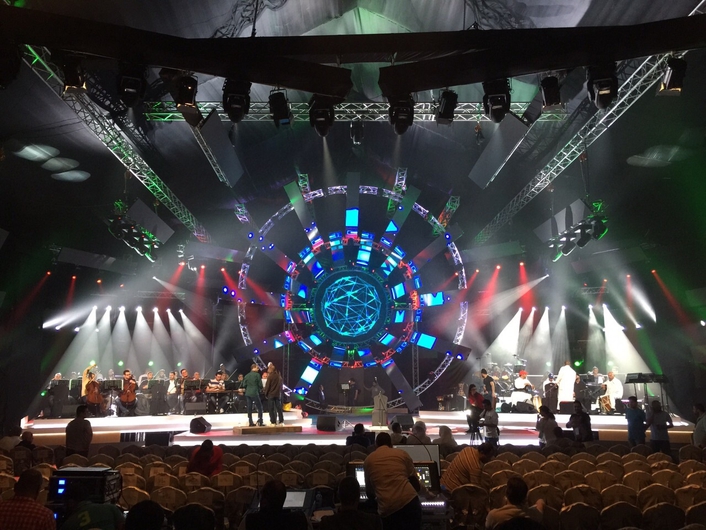 Used as the main LED video screen for their “reliability and excellent quality” was the Elation EZ6, a 6mm pixel pitch, 1,800-nits LED panel that produces high definition video with uniform color, high contrast and a sharp picture. Some 300 panels were used on the set for a number of applications including the all-important camera background for artist performances. EZ6 LED panels were also mounted in the innermost 4m truss circle and used for graphics and others were flown left and right on the outer circle truss.

“Everyone was quite impressed by the quality and stability of the Elation fixtures and none malfunctioned during the 3-week show,” Vince stated after the event. “For me, Elation is the best on the market as far as quality vs price. I see Elation on more and more riders in the Middle East.”

The Hala Febrayer concerts took place across three weeks in March and will be repeated on TV across the region throughout the year.