The in-the-round event was captured for later broadcast on TBN (Trinity Broadcasting Network), with veteran TV producer and director Russell Hall overseeing the 10-camera shoot on board Aspiration.  Hall hand-picked TNDV for the show based on his previous experience with the company and its Aspiration truck.

“We’ve used six different mobile unit providers for this event over the past 12 years, but Aspiration is specifically targeted toward capturing entertainment and music specials,” said Hall.  “It gave us an ideal complement of gear, a large expando working space and a small parking footprint.  I have said many times that if I built a mobile unit, this is exactly how I would lay it out.”

The National Quartet Convention brings gospel music’s biggest stars together, and Aspiration’s layout helped Hall deliver the right product for many production elements beyond the TBN broadcast, including a live webcast, an IMAG shoot and retail videos.  The project also required pristine audio production on behalf of record labels and performing artists, a role that TNDV ably filled with Vibration. 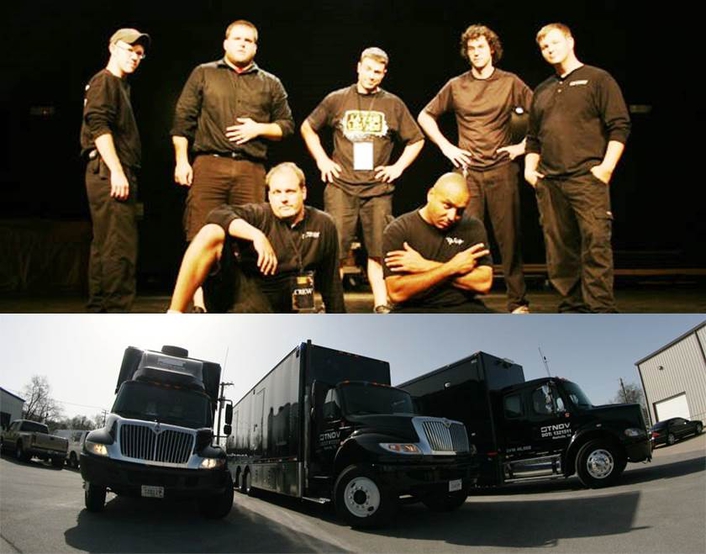 For Hall, the impact of employing a separate audio truck raised the overall production quality to a level not seen at previous NQC events.  They previously tried mixing and monitoring inside the venue, on board video trucks, in remote audio trailers and via other methods to varied success.

“In the past we have had to compromise on the quality of the audio capture, and this year we realized we had to make audio just as important as the video,” said Hall.  “We were producing an intense music event over a six-day period that would incur nearly 50 hours of audio capture.  Vibration gave us that same commitment to excellence on the audio side that Aspiration provides for video.”

For Nic Dugger, president and owner of TNDV, celebrating his 100th shoot with Aspiration at a nearly week-long event that covered 50 hours of complex concerts — with multiple producers and production companies — put into perspective how quickly things have progressed since launching the truck.

“In 25 months, Aspiration has done 100 unique shoots with unique load-in and load-out processes, often for multi-day events,” said Dugger.  “In the meantime we have launched three additional trucks, including our first audio truck with Vibration.”

Dugger notes that NQC was a special event to hit that milestone given how much planning went into the production.  “There was a crew member for each position — something not done very often today — which allowed TNDV engineers to truly service everyone involved instead of covering open positions.  It’s ultimately our jobs to make sure these portable facilities work just like their home studios, which allows everyone to work in complete comfort.”

Formed in 2004, TNDV: Television represents the culmination of many years of broadcast and live production for Nic Dugger, owner and president; and his staff of full time engineers. TNDV produces events from small single-camera productions all the way up to multi-million dollar international TV events, and takes pride in building custom solutions for challenging productions of any size, in any situation.  Recent productions include the live concert productions at the NCAA Final Four, the 2013 Re/Max Long Drive Challenge on ESPN, and the inaugural season of Sing for Your Supper on PBS.