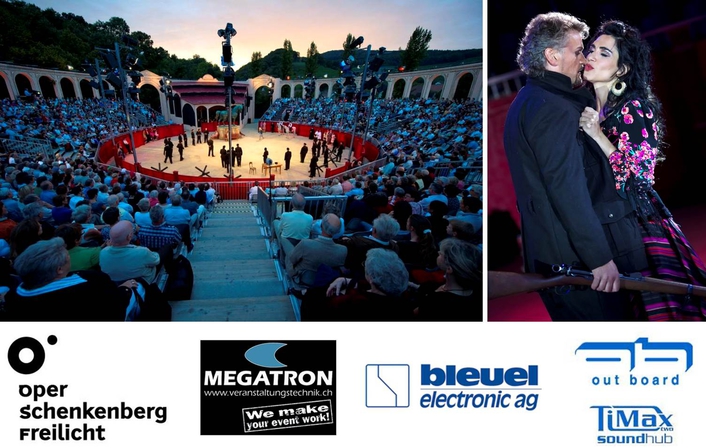 TiMax was specifed by sound designer Renee Zulauf, who was assisted on-site by Robin Whittaker of TiMax developers Out Board. Renee’s associate Dominic Schilt mixed the show on a SoundCraft Vi6, feeding radio-mic channel direct outs plus orchestra and reverb submixes to the TiMax Soundhub via optical MADI. The radio-mic handler backstage was Rigobert Schmidt who also took care of TiMax Tracker tag deployments and status monitoring. PA system engineering and supply was by Marco Eberle of Swiss rental company Megatron AG, who subhired the TiMax SoundHub and TiMax Tracker system from Bleuel.

The impressive 1600-seat mock bullring arena was purpose built in Russia for the Carmen production, and the show’s impresario, local operatic tenor Peter Bernhard, had it designed to be fully portable, with a view to touring it next year. Peter took the show’s lead role of Don Jose, supported by his own assembled company of premiere opera performers and musicians sourced both from within Switzerland and around the world.

Ten leads and chorus members each wore miniature TT Tags which transmitted streams of radar-frequency UWB pulses. These allowed the TT Sensors to continuously track the actors in three dimensions down to an accuracy of 15cm over a 100metre range, by simultaneously computing Angle of Arrival and Time Difference of Arrival for each Tag’s tracking signals.

Vocal reinforcement came from distributed d&b cabinets mounted on ten poles spaced equally round the front of the audience area. Each pole had a controlled dispersion Q7 pointing at the upper two thirds of each slice of seats, with a wider angle Q10 pointing down at the nearfield front seats. Each of these arrays was fed independently from the TiMax SoundHub matrix, which continuously adjusted delays and levels from each radio mic to every speaker so that audience members always heard the acoustic voices 10-20ms ahead of any speaker. This process was totally automated, controlled by a continuous stream of real-time performer tracking data from the TiMax Tracker system as the talent moved around the stage. This ensured that every actor’s voice was kept always precedent relative to the PA so they remained authentically localised for all audience members.

A separate d&b Q1 line array system was hung either side of the small orchestra stage to provide a stereo music mix. This was further augmented by a pair of Q7 peripheral outfills, plus a bit of orchestra mix was also bled via the TiMax matrix into the furthest vocal PA cabinets as delays. d&b subs were placed both at the stage and at ten locations under the audience seating, all time-aligned in TiMax back to the orchestra.

The show played to virtually capacity crowds for its entire two week run, and as sound designer Renee Zulauf observes: “Our client and the singer are happy so we’re happy – running this kind of show without TiMax seems impossible to me”.