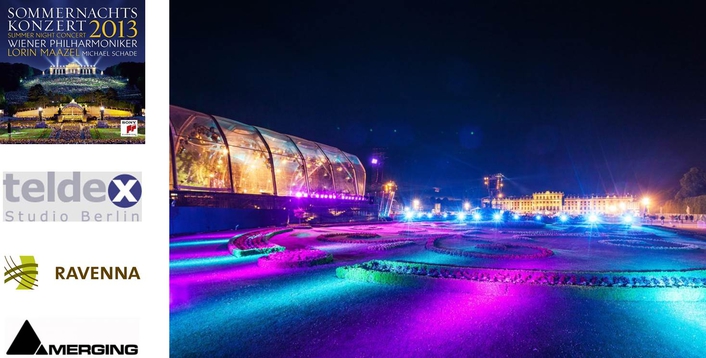 .
Teldex Studio Berlin continues to enjoy a busy recording schedule, both in the famous Recording Hall and on location. One of the most significant of the recent mobile recordings was the Vienna Philharmonic Summer Night Concert at the spectacular Schönbrunn Palace on May 30th.

This 200th birthday celebration of Wagner and Verdi with the distinguished Lorin Maazel conducting the orchestra and singers was hugely popular despite the distinctly un-summery weather. A concert as notable as this was obviously recorded for DVD release and broadcast on television so it was important to make sure that nothing could go wrong, but bringing a complete back-up system is quite bulky.

The Teldex team had as usual planned to record using Merging Technologies’ Pyramix with the Horus Networked Audio Converter, but it occurred to them that maybe bringing a second full sized workstation as their standard backup procedure for such an event was unnecessary. The advances in recent laptop technology might allow them to do something much neater. A MacBook Pro, a Thunderbolt connection to a Sonnet Echo Express PCIe Expansion Chassis just might provide the answer to running Pyramix MassCore with Horus in a more portable configuration.

It seemed to work in tests at the studio and the RAVENNA stream to the MacBook was absolutely free of glitches if the main PC was rebooted, so the decision was made to use this as the back-up recorder on the Summer Night Concert. This was not a trivial undertaking as there were 91 tracks to record, with 64 front of house and the remainder coming from the suspended microphones. As predicted, no problems were encountered and the recording was faultless. 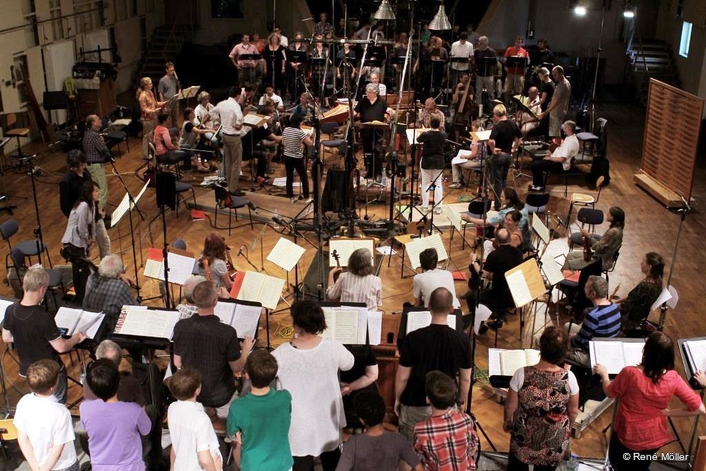 So impressed was René Möller from Teldex that he decided that this might be the way to do another important recording coming up on June 15th in Berlin. Sir Simon Rattle and the Berlin Philharmonic Orchestra were giving a performance of Benjamin Britten’s War Requiem. The orchestra streams all major concerts live in their Digital Concert Hall series but this was deemed important enough to need a high resolution recording for the archives, therefore Teldex were asked to supplement the Berlin Philharmonic’s existing equipment.

The recording needed to be in 24/96 resolution and this time 58 tracks were to be recorded but, in this case, the microphones feed into the hall’s Stagetec Aurus console with Nexus router.  This was no problem for the Horus with both MADI and AES/EBU connections available.  Once again, this combination worked flawlessly and René Möller made the following comment; “It is always gratifying when a theory works in practice. Using a PC based program on Mac hardware doesn’t always allow the normal settings to be made but this works like a dream. This is a real bonus for us and a real boost for Merging. To be able to use MassCore on a laptop is a real game-changer.”